Solund church is a so-called longchurch made of wood, situated in the municipal centre of Hardbakke in Solund. The church has a seating capacity of 200, and was consecrated by the bishop Jens Mathias P. Kaurin on 22 November, 1860. It was designed by the architect Christian Henrik Grosch. Solund church is the main church in the parish of Solund. Since 1 January, 2000, the three parish "sokns" have been unified into one. 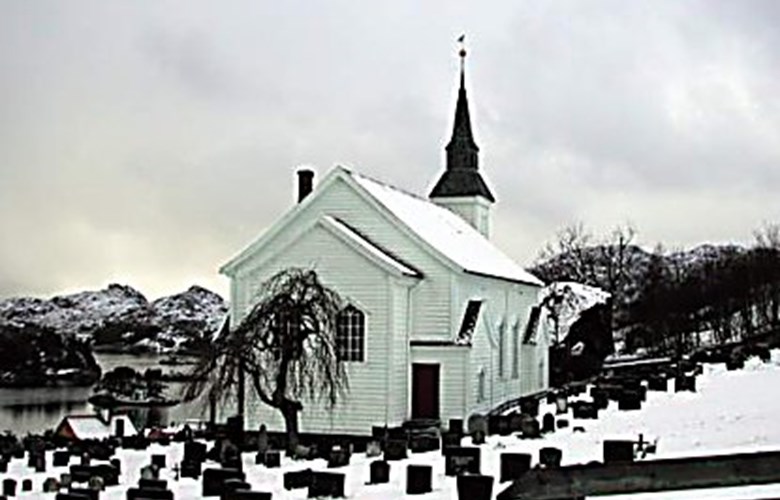 This is a view from the east of the Solund church at Hardbakke. Under the weeping willow lies the grave of the first vicar in Solund, Jon Andersen Raklev Kvaale.

The local people of Solund split between three parishes

It was not the population figures which called for the construction of a new church at Hardbakke. In the 1860s the small congregation consisted of only three farms. The geographical location of the village, however, was definitely an asset when the question arose to give the central islands their own church. Later on, it was in fact the very location of the church which led to Hardbakke's development into a municipal centre for Solund.

It was a major step forward for the people of Solund when the church was built at Hardbakke. Before 1860, according to where they lived on the islands, the people belonged to four different "sokns" in three different parishes. Those who lived on the central part of the municipality had to travel all the way to Eivindvik. The distances were long and travelling to church was often a dangerous undertaking. Besides, on many occasions the Eivindvik church was too small for the many people who belonged to this "sokn". The question of a new church was raised in the early 19th century, but the people could not arrive at a consensus. Most likely it was disagreement as to the location of the church which hindered any progress in the plans. In 1850, a letter was sent with an application to build a church centrally located in Solund.

The deanery board of directors wanted to co-ordinate various new organisational changes within the parish before taking any decisions to build a new church at Hardbakke. One of the problems was that the executive committee of the municipal council seems to have been dragging their feet when it came to buying the churches from private owners. This led to a conflict between the dean Dahl and the local politicians. His successor, the vicar Meyer, got so worked up because of this that he actually asked the deanery board of directors to sue the executive committee in the arbitration board. In this way he wanted to put an end to this conflict by a court decision. However, the matter was resolved without any court proceedings. The second conflict concerned choice of location. At a combined popular meeting and local council meeting at Steinsundholmen in 1857, a consensus was reached when the sites at Eide or Nessa were discarded because one person who had the longest distance to travel to church decided to go in for Hardbakke.

The lot for the church and the churchyard was bought in 1851. The building material was bought from the farm Tveit at Bøfjorden in Hyllestad. Much hard work was carried out before the construction itself could be started. In August, 1860, the vicar Meyer reported in a letter to the deanery that he had been on an inspection tour at the building site, and he expected the construction work to be completed some time in October. He missed by a mere month, and long before Christmas the local people of Solund could attend service in a church which was much more suitably located for all parties concerned. Many parishioners showed their joy and gratitude by donating money to buy the necessary new furnishings in the church.

Today the Solund church is the oldest one in the outer part of Sogn. The size of the church was adapted to a relatively moderate number of parishioners, with a nave which measures 13.5 by 9.5 metres (about 45 by 31 feet). The square chancel measures some 5.5 by 5.5 metres (about 18 by 18 feet) In terms of the exterior, the church resembles the two other churches in Solund, and even the steeple has the same design. On the other hand, a characteristic feature of the church architecture is the two copies of transepts on either side outside the vestry and at the lower end of the nave. 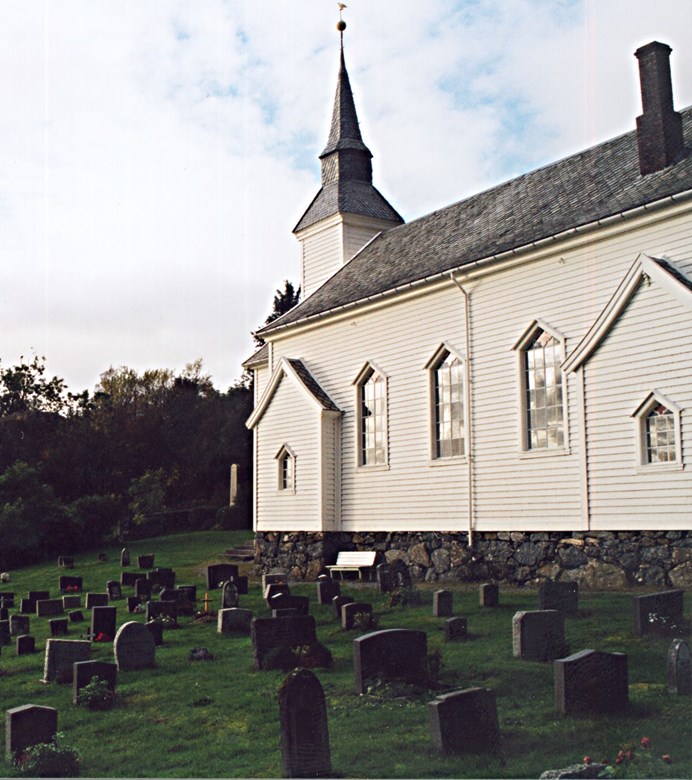 The church was at first furnished with rows of chairs with doors that could be closed in front of these rows. In 1905, a stove for heating was installed in the mid-section of the south wall. Three years later, the pantile roof was replaced by a slate roof, the doors in front of the chairs were removed, and the chairs replaced by the pews that are still there today. In 1929, panelling was put up on the walls. Instead of the flat ceiling in the nave, a vaulted ceiling was built. The chancel vault was built lower and the gallery was extended to make room for the planned organ. This organ was installed in 1930.

In 1959 electricity for lighting and heating was installed, and the interior was renovated in connection with the centenary / centennial of the consecration of the church. The most important colour changes were the light-blue walls which were now painted in a warm yellow, whereas the dado was painted grey. The three columns on either side were formerly white but were now painted light green, in the same colour as the backs of the pews. The pews themselves are in a reddish brown, a colour we also find on the pulpit and on the doors. There are three big windows on either side of the nave, and two smaller ones under the gallery. At the back of the chancel there are two windows behind the altarpiece. All the windows have a red, clover-leaf motif in the central, upper triangle with blue and green sections on both sides. A characteristic feature of the interior is that the floor in the central aisle is lower than the floor under the pews. In other words, the churchgoers must take one step up before sitting down. The funeral chapel with toilet facilities was built in 1980. Solund church is kept in good repair, and it got a new slate roof in 1999.

The altarpiece from 1860 is made by Anders Askevold. The motif is Jesus in the garden of Gethsemane. While Jesus is praying, his disciples are asleep. The inscription is: "Behold the Lamb of God, which taketh away the sin of the world. John 1; 29".

As with the altarpiece, most of the interior art objects date from 1860. On the altar there are two three-armed candlesticks made of German silver, inscribed "Donated by Berthel Andersen Tungodden and Helene Jacobsdatter Tungodden". For Holy Communion purposes a chalice, a dish and a paten in silver are used. These three objects all carry an inscription that they have been donated to the church by Ole Andersen Stensund. A silver spoon for use in Holy Communion has a similar inscription. The wine cruet in German silver is a gift from Lars Pettersen Tveranger.

The pulpit and the font also date from 1860. The brass baptismal dish has the following inscription: "Donated to Sulen (Solund) church by Ole Clausen Lien 1860". The holy water cruet is in German silver. The chandelier is a gift from several members of the congregation.

The organ from 1929 has nine registers and was built by J.H.Jørgensen in Oslo. There are two church bells, both from 1860. One carries the inscription: "Moulded by Laxevaags Værk near Bergen. Glory to God alone! In memory of Jacob Bendiksen Ravnøen on 1 August, 1860". The inscription on the other is: "Glory to God alone! Moulded by Laxevaags Værk near Bergen on 8 October, 1860. In memory of Johannes Christophersen Laagøen and Rasmus Paulsen Laagøen".

In terms of the exterior, the church resembles the two other churches in Solund, and even the steeple has the same design. On the other hand, a characteristic feature of the church architecture is the two copies of transepts on either side outside the vestry and at the lower end of the nave. The church has three big windows on either side of the nave, and two smaller ones under the gallery.
Owner: Fylkesarkivet i Sogn og Fjordane. - Date: 2002. - Photographer: Ole Stian Hovland.
Fylkesarkivet i Sogn og Fjordane.
2002.
Ole Stian Hovland.