The place name of Aurlandsvangen comprises a large area, corresponding to the Vangen "sokn" (sub-parish). This includes the farms along the fjord from Skjerdal to Otternes, as well as the farms up to the lake of Vassbygdevatnet. Traditionally, the farms from the centre of the village - Vangen - and northwards have been looked upon as a separate village - Utbygdi. The area called Aurlandsvangen has a varied history, stretching far back in time. 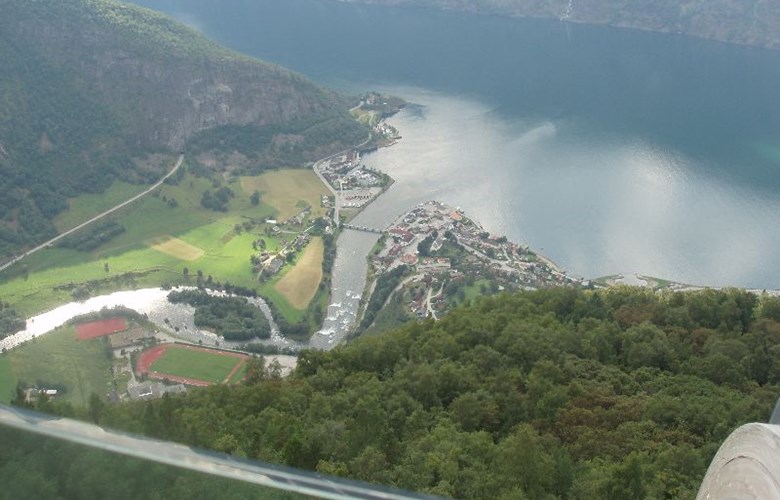 Aurlandsvangen seen from the viewing platform of Stegastein.

Before farms were established in the Aurland area, the area was probably used in the same way as in other villages in the neighbourhood in the form of hunting and fishing in the mountains. Around the mountain of Blåskavlen a number of hunting installations have been found such as pitfalls, built-up positions for using bow and arrow, in addition to places where game was chased off crags. No exact dating exists for the establishment of the first farms, but burial mounds from pre-Roman Iron Age (the last five centuries BC) indicate that both Aurdal and Onstad were established.

From the Icelandic Egil's saga, written in the 13th century, we know about a mighty family called the Aurland clan. This family ruled over large areas of Inner Sogn from the mid-10th century, and had close family ties to other mighty families elsewhere in Norway and abroad. A case in point is the famous woman Rannveig who had close ties to the Norwegian king Olav Kyrre and Danish royalty. It has also been maintained that king Sverre's mother, Gunnhild Sultan, came from the Aurland clan. The Aurland clan had family connections with the so-called "Armødlingane" at Giske in Sunnmøre, with the Rein family in Trøndelag, in addition to some mighty families in Scotland and Ireland. It is likely that the farms of Vinjum, Sult and Aurdal constituted the centre of the Aurland estate. On these farms there are burial mounds from the Viking Age to corroborate this theory.

In connection with the introduction of Christianity to Norway we see that mighty families often built churches to mark their affiliation to this new religion. These actions were not only based on religious conviction, but there is reason to believe that the building of churches was just as much an element in the building of alliances and power structures. The first church we know about is the stave church at Rygg that was torn down about 1570. The first written reference to the church dates from 1322, but the church was probably older than that. In the 13th century the present Gothic stone church at Vangen was built. The stone church became the "sokn" church when the stave church was torn down. The Aurland clan was probably behind the building of both churches. This may have had a strengthening effect on the ties between the Aurland clan and the Norwegian royal family, as well as on connections with families abroad.

Up until the mid-19th century, the area below the stone church at Vangen functioned as a housing area for sea crofters, boathouses and commons. Until that time the farm Sult (now Onstad) on the eastern side of the river owned important central functions in the village. This was due to the transport arteries where Salthella functioned as a natural quay. Besides, the road eastwards to Vassbygdi went on the Onstad side by way of the Tokvam and Loven farms. The central location meant that the farm was granted trade and inn privileges in the 18th century. In addition, the farm was also the residence for the bailiff as well as a permanent court site. The huge burial mound called Tinghaugen may give an indication that the place could have held this function even earlier. In 1870 a bridge was built across the river, a new steamer quay was built at Vangen, and in 1924 these central functions were moved from Onstad to the opposite side of the river.

From vicarage to organic agricultural school

The farm Aurdal had served as a vicarage since 1850, when this function was moved probably from Aabelheim at Vangen which was held to be a farm with poor soil. Compared with other farms in the district, the Aurdal farm had unusually extensive infields, which may date from the time when the farm was a part of the Aurland estate. A number of vicars operated and put their stamp on the farm operation until 1937 when it was taken over by the Sogn Agricultural and Horticultural School.

The school was established in 1917, but Aurdal became the first school farm. In the 1980s the school started to specialize in organic farming methods. Today the school is the only agricultural school in the country which has been accepted as an organic school in all its aspects by the control organization Debio. Various events and courses are organized at the school which also runs an organic farm shop. The school has become a driving force within organic farming not only in Aurland but also in other parts of Inner Sogn. Because of this, the municipal authorities of Aurland applied in 2007 to become a pioneer municipality for developing the production and consumption of organic food.

Vangen church in Aurland in the 1980s. The cornerstone was laid on 2 May 1202, and it took 80 years to build the "Sogn Cathedral" as it is also called. The local historian Anders Ohnstad thinks that king Sverre's mother came from Aurland. Her name was Gunnhild Sultan, meaning Gunnhild at or from Sult. The Onstad farm was then called Sult. Sverre, who had studied theology, may have contributed to getting the church built. Sverre died close to two months before the cornerstone was laid.
Owner: Fylkesarkivet Sogn og Fjordane - Date: 1980-talet - Photographer: Ukjend
Fylkesarkivet Sogn og Fjordane
1980-talet
Ukjend