Dean Niels Griis Alstrup Dahl (1778 - 1852) was called a public educator and a patriot. His work as a vicar is somewhat overshadowed by everything he did to improve the living conditions in the parish of Eivindvik. 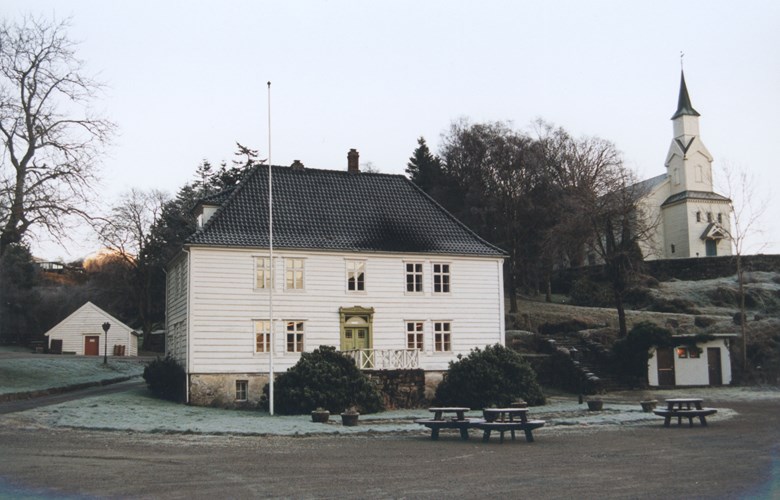 "Herresalen", the residence that dean Dahl built for himself and his wife Hylleborg, is located just below the Eivindvik church.

From 24 February 1894 Dahl worked as a curate in the Eivindvik parish, and as vicar from 18 December 1807. In 1823, he became dean of Ytre Sogn. Dahl did much to improve agriculture in the parish. He started with the vicarage, and by means of new agricultural methods and building traditions, he gradually turned the vicarage into a model farm. Over a period of 20 years, he was also behind land reallocation for close to 200 holdings in the parish. In this connection, he helped many farmers to buy their houses.

For his own private means, Dahl educated teachers, as well as establishing and running the first two schools in the parish. By changing the school tax system, he saw to it that teachers were paid enough to make a living. In 1829, he established the Gulen public library, and 134 of these books came from his private collection. He took personally care of the education of the confirmation candidates. On one occasion, all the candidates and 10 teachers stayed in his home and Dahl gave them education, room and board.

With an improved accounting of the poor relief system, he turned the poor relief into a model organization. The income came from the fines by the bailiffs and the tax collectors. Dahl looked upon liquor as the biggest obstacle to fighting poverty. Innkeepers and other licences persons were fined when they sold illegally, or taxed so hard that some of them went bankrupt. In addition, Dahl opened his home for sick people, and he vaccinated almost the whole parish twice against smallpox. He also saw to it that the first midwife in Ytre Sogn was employed about 1827.

Mayor and representative to the Storting

Dahl became mayor when the Board of Aldermen Acts were passed in 1837, and held this office until 1849. He was a representative to the Storting (Parliament) in 1814, 1824, and 1827, and he was held to be the strongest anti-Swede of all the representatives, and he was an ardent speaker in all the debates on the Constitution.

The dean's residence was called "Herresalen". The first floor has been used as a meeting room for the local council from 1837 until fairly recently. The vicar's quay with stairs leading up to the church and the 1.5.metre-high wall encircling the infields of the vicarage still stand. Every year, the youth association of Eivindvik organizes the "Dahl days", where various aspects of Dahl's life and work are covered. A memorial for Dahl by the artist Elisabeth Steen was erected on 4 August 2002, 150 years after his death.

Dahl was an ardent patriot. Bishop Pavels from Bergen, who had much contact with Dahl, writes that Dahl wanted to have "all foreign goods that could in some way be associated with luxury forbidden at the next Storting session, or imposed with high tariffs". The dean also had strong views on how to reduce the liquor consumption, and what position agriculture should have in this country. "He even wanted to reduce the import of grain", writes the bishop, "as he believes that when the distillation of spirits once again would be prohibited, people could be encouraged to a more productive cultivation. For the same reason, he thinks that it would be right that the rich herring fisheries were reduced or even stopped altogether so that the farmers, who now have no taste for anything but the fisheries, should be forced back to their fields, which would provide them with a more secure source of income than the ocean".
The picture that was believed to portray dean Dahl has been hanging in the local council hall at Eivindvik. Recently it has been discovered that the picture portrays Niels Nielsen Dahl (1806-1854), a Storting representative from the old county of Søndre Trondhjems Amt and vicar at Eid.
Owner: I <i>Gulen i gamal og ny tid.</i> - Date: Ukjend. - Photographer: Ukjend.
I <i>Gulen i gamal og ny tid.</i>
Ukjend.
Ukjend.

"Herresalen" to the left in the picture. The house was built in 1819 and was the residence of the dean. He admitted sick people for treatment in his house, teacher candidates and confirmation candidates to be educated, and people who were on poor relief. He paid for room and board out of his own pockets. He also adopted and brought up two gypsy children. Some who were seriously ill were sent to Bergen, whereas some teacher candidates were sent to teachers' seminars at Stord or in Kristiania (Oslo). The dean also built a model house at Fonnevika to show farmers how to build a house. It was later used for one of the two permanent schools that Dahl established. The picture above dates from 1890, the one below from 2001.
Owner: Hans Edvard Hadlund / Fylkesarkivet, SFFf-95155.0004. - Date: 1890. - Photographer: Ukjend.
Hans Edvard Hadlund / Fylkesarkivet, SFFf-95155.0004.
1890.
Ukjend.

Many of Dahl's contemporaries expressed their admiration for what Dahl had accomplished at Eivindvik. Bishop Neumann writes that "the cultivated land of the vicarage with its wonderful fields is in stark contrast to the surrounding crags with its gullies filled with boulders and rocks. It is indeed a masterpiece we are witness to here, by a man who is so interested in agriculture, and with such extraordinary toil and expenses have transformed this hostile landscape." The bishop looks upon what Dahl has done as a "proof of the truth that man can defy nature, when his enterprise is endowed with perseverance." In his poem "Eivindvig", a tributary poem to Dahl, Henrik Wergeland concludes in the following way: "Bread of stone and spirit of 'Striile' (local people), Dahl forced at Eivindvigen."
Owner: Studio Nordhordland. - Date: Ukjend. - Photographer: Arne Årseth.
Studio Nordhordland.
Ukjend.
Arne Årseth.