Utvik church is a wooden longchurch located in the village of Utvik in the municipality of Stryn. The church, with a seating capacity of 350, was consecrated on 29 November, 1840. The church is built according to the architect Hans Ditlev Franciscus Linstow¿s model designs. Utvik church is a ¿sokn" church for the Utvik ¿sokn" in the parish of Innvik. 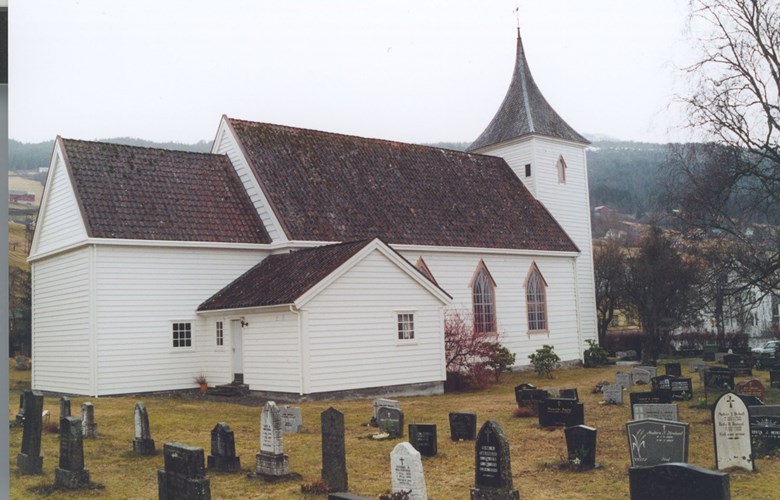 Utvik church is a white-painted longchurch from 1840. In 1968, a new and more spacious chapel was built, with a new vicar's vestry to the south and a new baptismal vestry to the north.

When the congregation of Utvik had started their planning of the 150th anniversary celebration of the church in 1992, it was revealed that they were two years too late. The year noted in the local history book was wrong. The church was not consecrated in 1842, but two years earlier. The correct year was also confirmed in a church register from 1840. In this book the vicar had written that the recently built Utvik annexe church was consecrated on the first Sunday in Advent, and for the year 1840 this was 29 November. Thus the anniversary had passed unnoticed without anybody realising the mistake. Nevertheless, the planned celebration took place in August, 1992..

Very little information exists why the 17th-century church at Utvik was replaced by a new one. Part of the explanation may be that the church had become too small as was the case in many other places. The church site remained the same.

The architect was Hans D. F. Linstow, who is considered to be one of the foremost classical architects in Norway. He also designed the Royal Palace in Oslo. Originally the white-painted church was built in such a way that the chancel had the same height and width as the nave. A small turret was built in its western end, where the turret base was used as a porch and a staircase to the gallery. At first the church could seat 300. On the northern side of the chancel the church owners had reserved seats, whereas the social and cultural elite had their seats opposite the vicar.

In connection with a major renovation in 1902, a chancel room and vicar¿s vestry were added. The gallery was extended and loose pews were installed. The doors were widened and the windows made higher and rebuilt in a pointed-arch style. These changes gave the church a mixture of styles that experts in retrospect have divergent opinions about. In 1968, a new and more spacious chancel was built, with a new vicar¿s vestry to the south and a new baptismal vestry to the north. In connection with the baptismal vestry, a corridor was made including a wardrobe and toilet facilities. At the same time, the old altarpiece and pulpit were re-installed - two unusually fine works of Renaissance art. 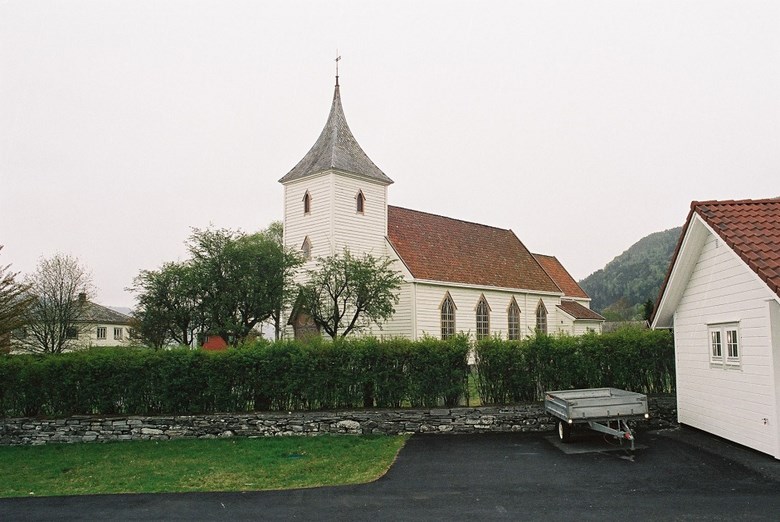 Up until recent times, the Utvik church has been a meeting place, not only for the villagers of Utvik, but also for their neighbouring village people of Tistam, but also from the villages of Fjelli and Randabygda on the other side of the fjord. For a period of about a hundred years, from the mid-19th century until 1967, parts of Hopland also belonged to Utvik. In 1967, the people of Randabygda got its own church and status as a so-called chapel "sokn", and then from 1981 a regular "sokn". At the same time, the hamlets and settlements on the northern side of the fjord that belonged either to Utvik or Innvik were transferred to Hornindal parish.

In the period between 1902 to about 1950, the 1617 altarpiece was placed in the church attic, then moved to Bergen for safer storage, before being returned to Utvik in 1968. During the years when the old altarpiece was removed from its rightful place, the painting "Jesus in the Garden of Gethsemane" served as an altarpiece. This was a copy made by Anders Orheim from Stårheim of Anders Askevold¿s altarpiece in the Askvoll church. The inscription on the painting is taken from Matthew 26;38 ¿My soul is exceeding sorrowful, even unto death". In 1992, it was placed on a wall in the nave, where there previously had been windows. 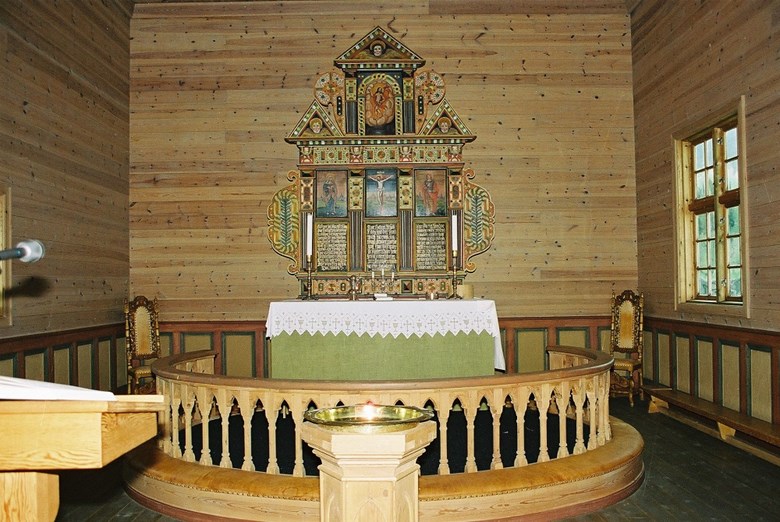 The reason for the wish to have a new altarpiece was probably that the original from 1617 had been painted over some time in the 19th century. This made the altarpiece look pale, with a blue central section with a red cross. The side sections were covered with white stars against a red background, and the picture in the top section was painted over in a blue colour. The altarpiece was restored by the curator Bjørn Kaland, and put back in the church in 1968.

The altarpiece is made in high Renaissance style with so-called cassette ornamentation, divided in three main parts and with a gable crown and side gables. It is very similar to other altarpieces from the same period. It is a combined catechism and picture altarpiece, and is divided into six sections of equal size. The three lower sections contain central texts from Scriptures in golden Gothic type against a black background: to the left ¿The Lord¿s Prayer", in the centre and to the right the Holy Communion text. Above these there are three paintings: in the centre is Christ on the Cross, to the left is Mary, mother of Jesus, and to the right is probably Mary Magdalene. The framework is richly decorated with painted carvings. The top section has a painting of the victorious Christ with a cross and a victory banner. The top sections have ridge-like conclusions. In each triangle there is a painting of an angel. The colours are original, and give an impression of a harmonious and well-executed composition.

On the altar there are two candlesticks from the late 17th century with an inscription in German. The silver Holy Communion set consists of a chalice, a paten, a wine flagon, and a pyx from 1968. The Bible was published in 1738, and given to the church in 1766.
The 1617 pulpit was also returned to the church in 1968. It is made in the same style and dates from the same period as the altarpiece. Most likely it has the same origin. The pulpit has five picture sections. The central picture depicts Christ with the Latin words ¿Salvatore mundi" (Saviour of the world) underneath. On either side there are two of the evangelists Matthew, Mark, Luke, and John. The font dates from 1902, and the brass baptismal bowl dates from the 17th century. 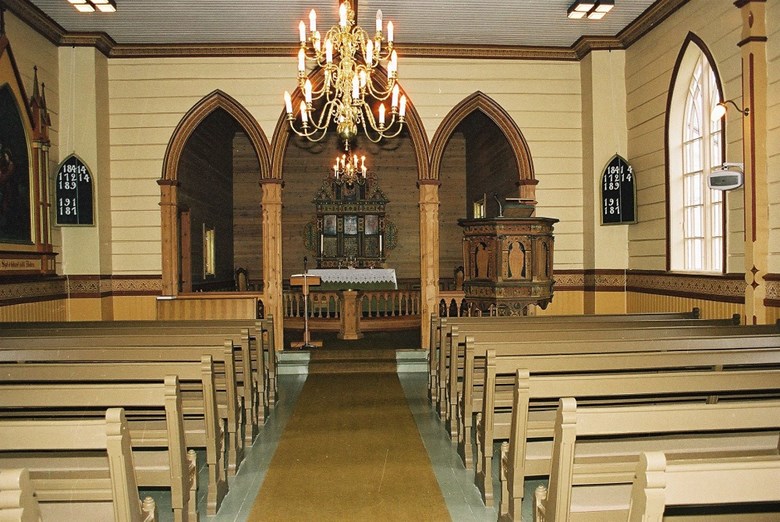 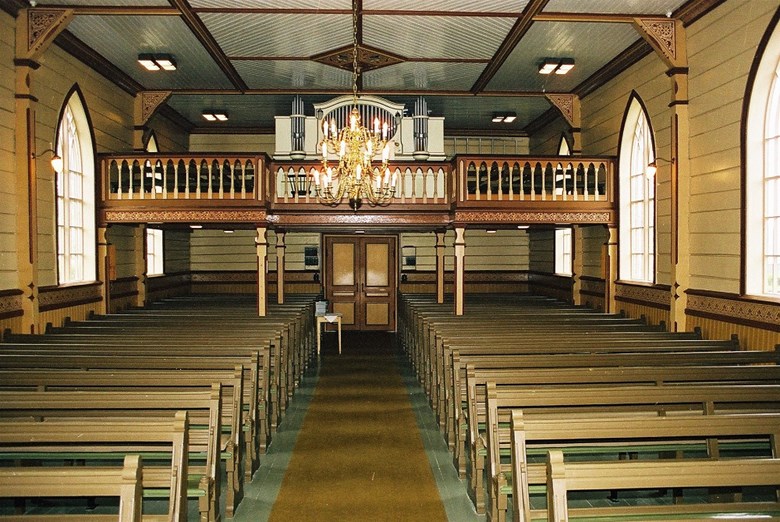 Utvik church lies close to the crossroads, and enjoys the same central location today as it had 150 years ago when the fjord was the main artery of communication.
Owner: Stryn fellesråd. - Date: 2003. - Photographer: Svein F. Rønne.
Stryn fellesråd.
2003.
Svein F. Rønne.

The altarpiece is high Renaissance style has cassette ornamentation. It is divided in three main parts with gable crown and side gables. The altarpiece is very similar to other altarpieces from the same period. It is a combined catechism and picture altarpiece, and is divided in six sections of equal size. In the foreground the font from 1902. The brass baptismal bowl dates from the 17th century
Owner: Stryn fellesråd. - Date: 2003. - Photographer: Svein F. Rønne.
Stryn fellesråd.
2003.
Svein F. Rønne.

From the interior of the church, the nave with the chancel in the background. In 1902, major restoration work was carried out, which gave the church a mixture of styles that experts in retrospect have different opinions of. In 1968, a new and more spacious chancel was built, with a new vicar's vestry to the south and a new baptismal vestry to the north.
Owner: Stryn fellesråd. - Date: 2003. - Photographer: Svein F. Rønne.
Stryn fellesråd.
2003.
Svein F. Rønne.

From the interior of the church, from the nave towards the gallery and the porch. The gallery was extended in 1902. At the same time, new loose pews were installed. The organ dates from 1913 and has seven registers.
Owner: Stryn fellesråd. - Date: 2003. - Photographer: Svein F. Rønne.
Stryn fellesråd.
2003.
Svein F. Rønne.
resources:
Aaraas, Margrethe Henden m.fl.: På kyrkjeferd i Sogn og Fjordane - 1. Nordfjord og Sunnfjord. Selja Forlag. Førde 2000.