Holsen church is a basilica church in wood located at Holsen in the municipality of Førde. The church, which accommodates 200 people, was consecrated on 11 December, 1861 by the dean Johan Christie. The architect Jacob Wilhelm Nordan designed it. Holsen church and Haukedalen church are both "sokn" (sub-parish) churches for Holsen and for Haukedalen in Førde parish. 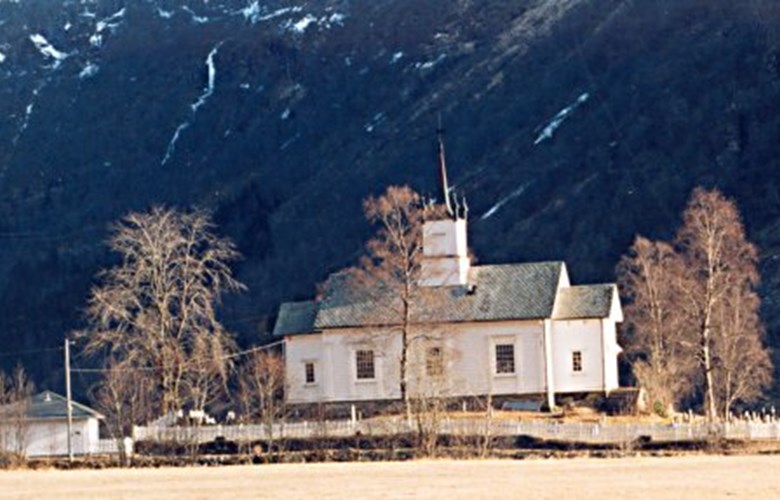 Holsen church is beautifully located and proudly shows it characteristic steeple. It has a symmetrical appearance with a steeple in the middle, and the porch to the west and the vestry to the east are both equal in size.

At Holsen one of the last stave churches in the district of Sunnfjord stood. It was torn down some time after 1722. When a new timber church was built, they chose a new site safe from floods on an elevation 100 metres to the west, where the church built in 1861 now stands. Here the church is beautifully located, to the east of the lake Holsavatnet.

Holsen is an ancient church site, referred to the first time in 1360. Up to the 17th century the Haukedalen people also belonged to the Holsen church, before they had their own chapel. The church of today is the third at Holsen, and it is the oldest of the three churches in Førde Municipality.

Steeple in the middle

Holsen church is a timber basilica church painted white, with chancel and nave equal in width. The timber for the church was felled in voluntary communal work by people from Holsen, in the forest of Viskedalsskogen. The groundwork and transportation of the timber was obligatory labour, in which people from Haukedalen are also believed to have participated. When the church was consecrated in the autumn of 1861, Ola Nilssen Haarklou, father of the well-known composer Johannes Haarklou, had set up a choir for the occasion, and this was probably the very first choir in the district of Sunnfjord.

The church has a symmetrical appearance, with a steeple in the middle. The porch to the west and the vestry to the east are equal in size. The interior walls are not painted, there is no gallery, and the ceiling is flat and painted blue. On each long side there are three large windows. The church remained unchanged until 1936, when the ceiling, mouldings, altar rail, and pulpit were given new colours. Angular braces, which supported the ceiling and the walls, were removed, and the church interior became more open. Behind the simple wooden cross on the altar a canopy with stars against a blue background was installed. The walls were kept unpainted. Outside were built new steps and a new approach road. An electric organ was installed, donated by the people of the community and by Holsen people who had moved. In the 1950s coloured glass was installed in the interior.

Around 1975 a new chapel of rest was built, with a room for equipment and plumbing. The churchyard was extended in 1977, and a new fence was put up. In 1998, an extensive renovation was undertaken. The panelling was taken down, and the church was insulated. The old panelling was replaced and repainted. The church at Holsen is used for regular service every three Sundays.

During the 1990s, Holsen church was hotly debated in the media because of the differences of opinion about a new altarpiece. There are many examples where churches from the time Holsen church was built, at first were given a simple altar decoration in the form of a wooden cross. It is difficult to say how well considered this choice was, and if the cross was actually intended to be temporary. In the 1970s, the Holsen "sokn" council suggested a change in the altar area of the church. The plan was all the while that the gilt wooden cross should remain in the church, but be placed somewhere else in the church. In 1987, the artist Jørleif Uthaug was approached, and in June, 1988 the council commissioned him to make a proposition on the basis of a presented draft. The draft immediately stirred up controversy, and as many as five "sokn" meetings passed resolutions in the course of one year. Two meetings supported the draft, while three were opposed. In the heat of battle elections to the "sokn" council were held, in October, 1989. The outcome of the election was that a new council with a majority of opponents took over at new year, 1990.

In June, 1989 the "sokn" council had allied for approval of Uthaug's draft, and, and Bjørgvin Stiftsdireksjon (diocese) endorsed it on 15 November, 1989. Thus the legal basis for the new altarpiece to be installed was in place. But it would not happen. The new "sokn" council opposed it. And the old "sokn" council had, before it stepped down, passed a resolution to transfer the responsibility to finish the altarpiece project to a committee, and to write the contract with Jørleif Uthaug. Probably this transfer to a committee outside the "sokn" council, made the commitment less binding for the new council to go through with the plan.

The controversies were at their hottest in 1992. Uthaug's altarpiece was then exhibited in Førdehuset in Førde, which led to a considerable interest by the media, and which hardly eased the controversies. Lawyers on both sides worked to find a solution, without success. The bishop of Bjørgvin, Ole D. Hagesæther, in 1995-1996 chose to undertake dialogues and to meet with the last "sokn" councils, and with the donors of the altarpiece. The donors chose to make the independent decision to withdraw their gift. Later it was decided to install the altarpiece in the new church at Vassenden.

On the altar are two candlesticks in brass, probably dating back to 1861. The altar set consists of a chalice, a paten probably from 1861, and a pyx and a wine flagon from 1976.
The pulpit and the wooden font painted blue are from 1861. The baptismal bowl in brass dates back to 1620, and it has an inscription in Dutch: "Bemindt G boven allen dingen". The holy water ewer in pewter is not dated.

The organ is from 1981 and has five registers. It was built by Jehmlich VEB Orgelbau in Dresden. The church bell from 1861 has the inscription: "Gud alene Æren (God alone Honoured)", and was made by Laxevaags Jernstøberi.
The door of the church comes from the old stave church and is made of two wide boards which are rounded off at the top. It has characteristic iron furnishings with clear similarities to the chancel door of Hestad chapel. Today the door hangs in the staircase to the church attic.

Holsen is an old church site, referred to as far back as 1360. Until the 17th century, Haukedalen also belonged to Holsen church. The present church is the third at Holsen, and it is the oldest of the churches in the municipality of Førde. The picture shows the church in the direction of the chancel.
Owner: Fylkesarkivet i Sogn og Fjordane. - Date: 2000. - Photographer: Hermund Kleppa.
Fylkesarkivet i Sogn og Fjordane.
2000.
Hermund Kleppa.

The interior walls are not painted, there is no gallery, and the ceiling is flat and painted blue. The altarpiece from 1861 is a gilded wooden cross with cross arms formed as clover leaves. In 1936, a blue canopy with silver stars was installed behind and above the cross.
Owner: Førde kyrkjekontor. - Date: 2001. - Photographer: Jon Baxendale.
Førde kyrkjekontor.
2001.
Jon Baxendale.