Traces of mining on the island of Svanøy

From the quay at Svanøybukt there is a gravel road going east to Nordneset. At the last house, the road continues as a tractor road or path. A rusty iron rod stands by the road with a warning sign on it: DANGEROUS MINE ENTRANCES. The terrain has grown over with pine trees. In this area we find hidden traces of mining activities of former times. 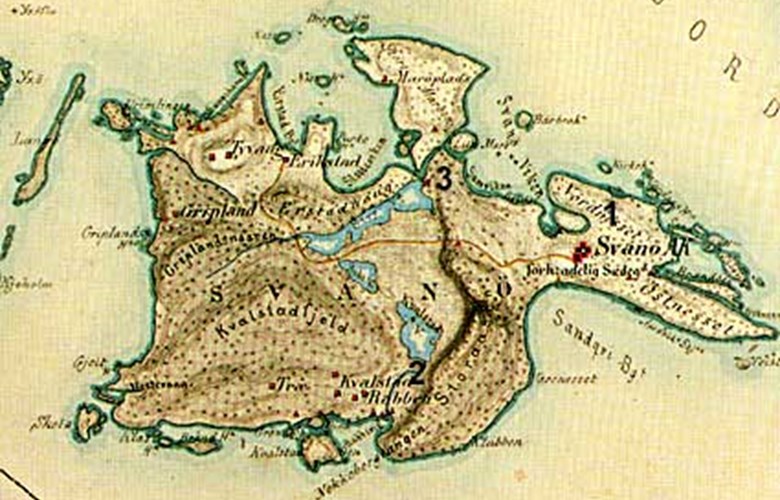 At various times, people have tried to make money on the Svanøy pyrites.

Occasional operations over an 80-year-long period

Eva Skomsøe Svanøe has collected background material on the mining activities and written an article in the annual magazine of the Flora Local History Society.

It all started in the 1860s, when Christopher Svanøe started an experimental operation which lasted 18 months.
In the 1880s, a small Bergen company resumed the mining activities. They mined for four years with from 12 to 25 workers. (According to Amund Helland's bookTopografisk-statistisk beskrivelse. Nordre Bergenhus Amt, 1901., 2000 tonnes of 40% sulphur and 3% copper were extracted in 1883)

The last period, from 1905 to 1920, can be summed up in the following points: a) a number of partners were involved, b) more use of expertise and a significantly higher operational activity, with new facilities in the form of buildings and transportation rail, c) bigger workforce - a maximum of 100, d) mining at other locations, for example at Kvalstad in the southern part of the island, and e) optimism at first with some good years in between, before pessimism towards the end and eventually closing-down of the operation.

Carl I. Christensen started the last pyrite period in 1905. He invested heavily and continued until 1907, when the Englishman H. Tideman was given an option contract for the mines. He continued developing the mining activities, but had to give up after two years when he went bankrupt.

A new partner entered the scene shortly afterwards, ship-broker Fridjov Sundt from Bergen. He employed mining engineer A.O. Backe as head of operations, and after him engineer Breittholz in 1910.
Now followed a golden age for the company, and in 1915, ship-broker Sundt established a limited company. The new company was optimistic about its prospects. The accounts showed a nice profit in 1915 and 1916. A new 200HP diesel engine was bought that supplied the whole operation with electricity. Means were even earmarked for social measures - 5000 kroner for an insurance arrangement for the workers, as well as 4000 kroner for the poverty commission.
Nevertheless, in spite of several good years marked by optimism and progress, the situation suddenly changed for the worse in 1917, and after a deficit in 1917 and 1918, the mining operation was shut down in 1919.

Traces in the terrain

At a steep hillside, an enormous concrete construction towers at least ten metres up in the air. On one side of this construction, there are huge piles of rock. The miners blasted the pyrite-rich rock in the galleries, and transported it up to the crushing mill, and then further down on rail to the shipping-off quay at Svanøybukt. Near the tower, there were a number of buildings, where foundation walls and staircases still remain. There are many mine entrances, now filled up and barred with high and solid fences.

b) It is a pity that the rock pile by the crushing mill has been substantially reduced quite recently. An important element in the total mining-historical landscape is therefore strongly damaged. c) What about some information in the terrain?

There is also soapstone at Stryvatnet, and traces of extraction. Soapstone was used as early as in prehistoric times as a raw material for cooking vessels, sinkers for fishing gear, and later as a building material. In his book "Beskrivelse over Søndfjord" from 1785, vicar and bishop Hans Arentz (1731-1793) writes that after the great fire in Bergen in 1756, many "jekt" loads of soapstone were shipped off to Bergen. There is Svanøy soapstone both in Nykirken and Tollboden in Bergen. There was activity at the soapstone quarry at Stryvatnet until the late 19th century.

The ruin of the crushing mill is the most conspicuous structure after the mining operation. For a long while, it was used as a sailing landmark for boats, but as years have gone by, it has gradually disappeared in the pine forest. From the crushing mill, the crude ore was transported on rail down to the shipping-off quay at Svanøybukt.
Owner: Fylkesarkivet i Sogn og Fjordane. - Date: 2004. - Photographer: Hermund Kleppa.
Fylkesarkivet i Sogn og Fjordane.
2004.
Hermund Kleppa.