The "Trondhjemske" postal road in Gulen

The postal road in Gulen was formerly a part of the "Trondhjemske" postal road. In 1868, the road was no longer used as a postal road as the post was transported by steamer to Vadheim. 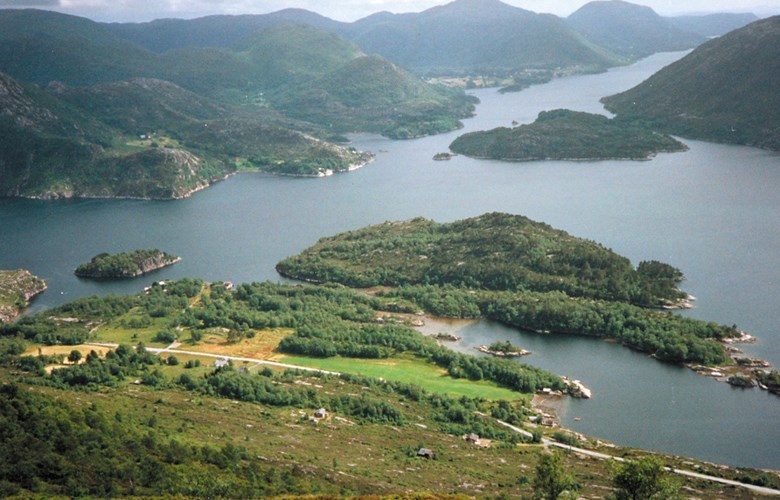 The postal route in Gulen was built in the years between 1800 and 1806 - 13 kilometres of road on land and 20 kilometres at sea. The postal route crossed the Fensfjord from Fannebust on the Lindås peninsula to the bay of Postvågen in Gulen. As indicated by the place name, there was a postal quay and boathouse at Postvågen. From Postvågen the route continued to Eide, and from there further by boat to Nordgulen where the post office was located.

In 1838, applications were made to move the post office from Nordgulen to Haveland, but this was not recommended by the post master at Eivindvik on the grounds that: "Nordgulen as a farm can provide better comfort for travellers, and one of the farmers has built a house with a tiled stove, acquired a postal cart et cetera, whereas at Haveland there are only small "smoke cottages" with no comfort at all for travellers". Nevertheless, the post office was moved. At Haveland a quay was built, and by and by shops, post office and a school were built. The road from Haveland to Rutledal measures 10 kilometres and has seven bridges. 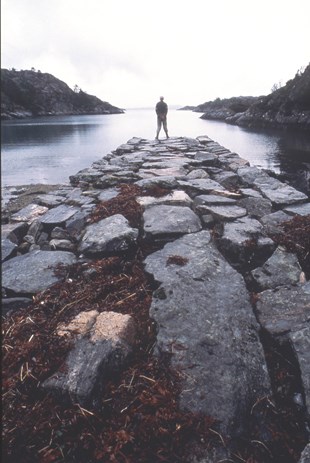 On his journey south towards Bergen, the Frenchman Jacques-Louis de la Tochnaye came across the ferrymen at Rutledal who wanted to charge more for the crossing than they had agreed beforehand. He had to brandish a defective pistol to keep them at arm's length. The people were not particularly friendly either, when they screamed and sided with the oarsmen. This crossing took place in November 1799, just before the postal road was built. According to the Frenchman, he hiked across a rough terrain, covering only close to 10 kilometres in four hours. His horse had to climb a stony terrain and the narrow gap (Trangane) was full of waterfalls. Shortly after Tochnaye's visit, two slab bridges were built at Nordgulen and at Trangane.

The postal road closed down

The land traffic was minimal. The travellers were mainly postmen, a few civil servants, and the occasional tourist. The local people had no need for the road as the transportation of goods took place mostly by boat. The transportation of goods usually went from the sea up to the farms. As early as in the 1840s, there was a noticeable decline in the traffic along the postal road because of the steamers. The transportation of goods was gradually moved from road to sea. The postal road through the municipality of Gulen lost ground. A case in point was that the application to improve the road standard on the steep parts of the Rutledal road (Trangane and Bleikli) was turned down on the grounds that ".. the road was one of the county's least used roads and, as far as communication was concerned, of little importance (-) inasmuch as the steamer traffic in Sogn has reduced the number of travellers across the valley of Rutledalen". In 1868, the postal route through Gulen to Langeland by way of Dale closed down. The post was transported by steamer from Bergen to Vadheim and further to Førde overland. However, the road was still important for local people in Gulen. 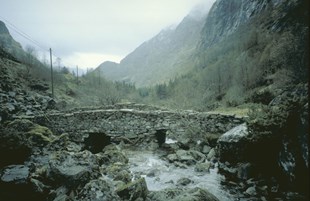 Today the old postal road in Gulen is one of the protected cultural heritage sites that the Norwegian Public Roads Administration is responsible for. With two other road sections, the Gulen road will represent the 700-kilometre-long postal route between Bergen and Trondheim. The three sections represent different landscape types, and together they show the breadth of the ways the postal route was built. The postal route through Gulen was chosen because a large part of it goes at sea. 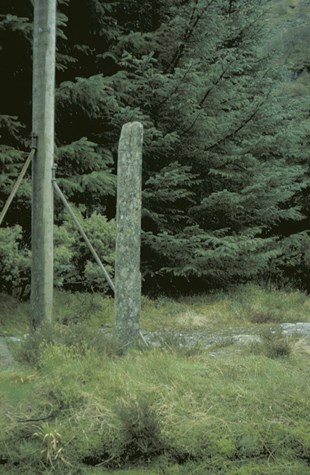 One of the old "rode" road markers at Sandvika remains. The stone is 1.6 metres high and has the following inscription: nr. 31. In 1826, the maintenance responsibility for the road was divided into 25 sections or "rodar".
Owner: Statens vegvesen Region Vest. - Date: 1999. - Photographer: Sigurd Bødal.
Statens vegvesen Region Vest.
1999.
Sigurd Bødal.