Bulandet "bedehus" chapel is an extended "bedehus" built in wood, located on the point of Kjempeneset on the island of Musøya in the municipality of Askvoll. This house with a seating capacity of 170, was built as a "bedehus" in 1905, and was consecrated for church functions on 27 July, 1909 by the dean Henrik Borchgrevink. Local people took care of the design and the construction work. Bulandet is part of the Vilnes "sokn" in the parish of Askvoll. 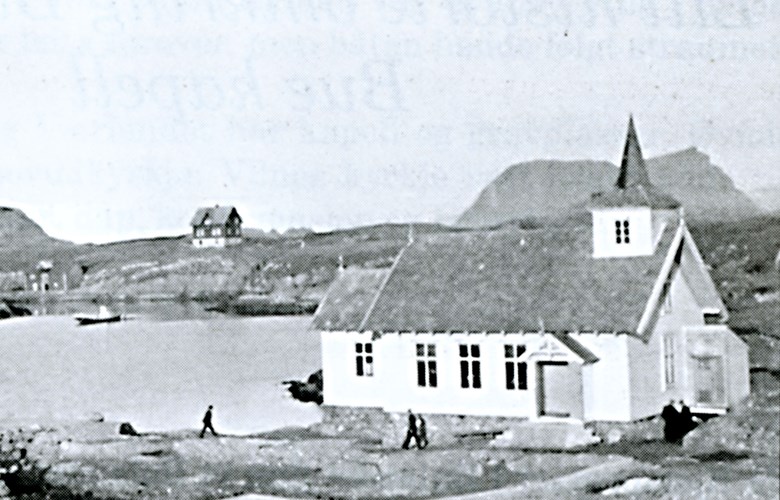 Bulandet 'bedehus' chapel the way it looked before the restoration work in 1966.

Bulandet has had a church since the Middle Ages, but had to fight hard to get a "bedehus" chapel in the early 1900s. The old chapel on the island of Gjelsa was torn down in 1813. Further back in time, Kyrkøyna (the Church Island) is said to have been a former church site. The point of Kjempeneset was an obvious location choice for the third church building because it was the centre of the village with an inn and a shop.

The building is formally a "bedehus" chapel, but when the inhabitants of Bulandet talk about it, they tend to refer to it as a church. The house was originally built as a "bedehus" and consecrated for that purpose in 1905. Local people raised the necessary means and also carried out the construction work. The vicar Karl Andreas Breyholtz was an enthusiastic supporter of the building project. Several years earlier he had received permission from the Ministry of Church Affairs to conduct bible readings four times a year on the islands. This organised religious activity led to a demand for a bigger building where people could assemble. People on the islands were used to bible readings even before this time, but these were of a more sporadic character and there were hardly any private homes suitable enough for this purpose. In addition, they had not had any chapel since it was torn down in 1813.

The vicar's role as a backer

When the "bedehus" was taken into use, there were six bible readings / services every year. More and more people came to realise that if they had been able to build a "bedehus" with voluntary work, it would surely be possible to extend the house so they could get a consecrated house where all church functions could be carried out. Once more, the vicar Breyholtz played an important role. In a letter to the Ministry dated 6 February, 1906, he applied on behalf of the inhabitants on the islands for a state contribution of 1500 kroner to be used for extending the "bedehus" and equip it for church functions. In the letter he added that the 374 permanent residents on the islands in no way could raise this sum. They still had a debt of between 2000 and 3000 kroner for the building of the "bedehus", and it was fire insured for 4200 kroner.

In addition, the vicar wrote that during his 20-year-long work in the parish he had experienced how hard and inconvenient it was for these islanders to get to church. Getting to church could indeed be a hazardous undertaking, especially in the autumn and in wintertime. For this reason, he strongly recommended a state contribution of 1500 kroner to finance the rebuilding of the "bedehus" for use as a church.

In the spring of 1908, the Storting (the Norwegian parliament) allocated the money.

On 27 July, 1909, the "bedehus" chapel was consecrated for church functions, furnished with a new chancel, altar rail, and extended steeple. The house now had a form like a church, looking very elegant on its location out on the small headland. For the islanders of Bulandet this was indeed a red-letter day. However, even if they now had their own house where services could be officiated, they still went to the church at Vilnes for funeral services. This went on until 1938-1939 when a graveyard was consecrated at Værlandet. Some wanted to bury their dead at the graveyard at Vilnes where their family members had been buried, but eventually everybody switched to using the graveyard at Værlandet. In 1976, the graveyard at Kjempeneset, not far from the "bedehus" chapel, was taken into use.

In the early 1960s, a major restoration work was carried out on the "bedehus" chapel. Before this work was started, the islanders disagreed strongly as to what should be done. The islanders were split in two groups - some went in for restoring the building, whereas others wanted a completely new church to be built on the site of the Fishermen's Home near the seaward entrance to Bulandet. The restoration group won the day, and the house was extended with a vestry and an addition to the south with toilet facilities and a cloakroom. On the loft a small kitchen was furnished. On 19 June, 1966, the newly restored chapel was once more taken into use.

For the confirmation ceremony, the teenagers from Bulandet had to travel to Askvoll until the early 1950s. After that time, the confirmation ceremony was ministered every other year at Værlandet and Bulandet. In recent years, the teenagers have been allowed to be confirmed where they live. At Bulandet and Værlandet there is a service about every four Sundays.

The altarpiece portrays the kneeling Christ in the garden of Gethsemane, and is painted by Vilhelm Bjørknes from Gulen. The inscription "not my will, but thine, be done" is a quote from Jesus praying on the mount of Olives. A ray of light shines through the dark clouds, expressing heavenly comfort and strength. The painting is a copy. In addition to the signature, it is written: "After H. Hofmann". There is some uncertainty as to the identity of this person, but most likely it is Johannes Bendtsen Hofmann (d. 1733) from Denmark.

Above the chancel entrance there is a text board with a cross: "Jesus Christ the same yesterday, and to day, and for ever. Hebrews, 13;8."

The organ from 1900 has seven registers and is built by Nicholson & Son Organ Builders in England. It is a gift from the Norwegian Seamen's Church in North Shields, England, probably in 1913. The church bell also dates from the same year.

Kjempenes was a trading centre from 1740 until the mid-19th century. This is a view of the place in 1909, long after the trading activities had ended. The chapel , in the background to the left , was erected in 1906, but the bell and the steeple were not added until 1913.
Owner: Steinar Skåsheim. - Date: 1909. - Photographer: Ukjend.
Steinar Skåsheim.
1909.
Ukjend.