Steigastølen, which is located straight under the Ølnesstølen mountain farm and close to Bergastølen, used to be the summer mountain farm for the farm called Steig. At the mountain farm the milk was separated and churned, and the skimmed milk was given to the calves. Lars Steig cultivated about two acres near the mountain farm. He cut the hay and later transported the hay down to the main farm in wintertime. The mountain farm was in use until 1979. The two buildings still remain and are now used as cabins. 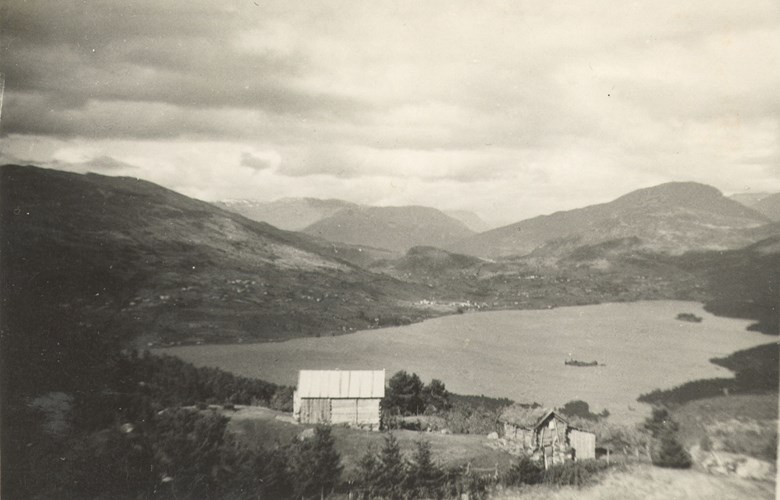 The Steigastølen mountain farm with the lake of Hafslovatnet and the village of Hafslo in the background. 'Nyaselet' (the new building), built in 1940, to the left, and the considerably smaller old building - 'Gamlaselet'. To the right in the picture we can see a part of the cultivated field, (norwegian: slåttegjerdet). This field is called 'Strandagjerdet'.

In 1954, Kari and Lars Steig had four milk cows, two calves and 20 sheep. In the same year they received a diploma from the organization ¿Ny Jord" (literally ¿New Land¿) for their clearing and cultivation efforts 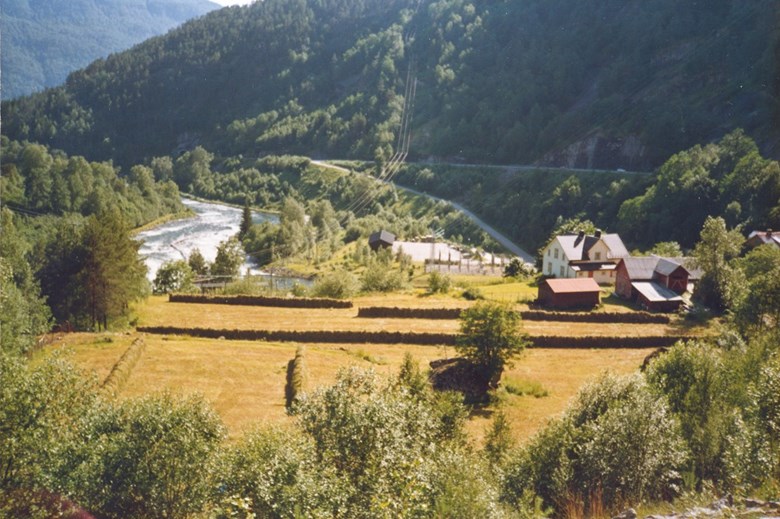 In the spring of 1940, Lars Steig built a new, larger house at the mountain farm because the old house was too small. After this time the old house was used for accommodation during the haymaking season or for storage of food. About 1990, masses of snow destroyed the old house. The owners, Johanna Gunnlaug and Harald Kvåle, built a new house on the old foundation walls. Both houses are in good condition and are used as holiday cabins. 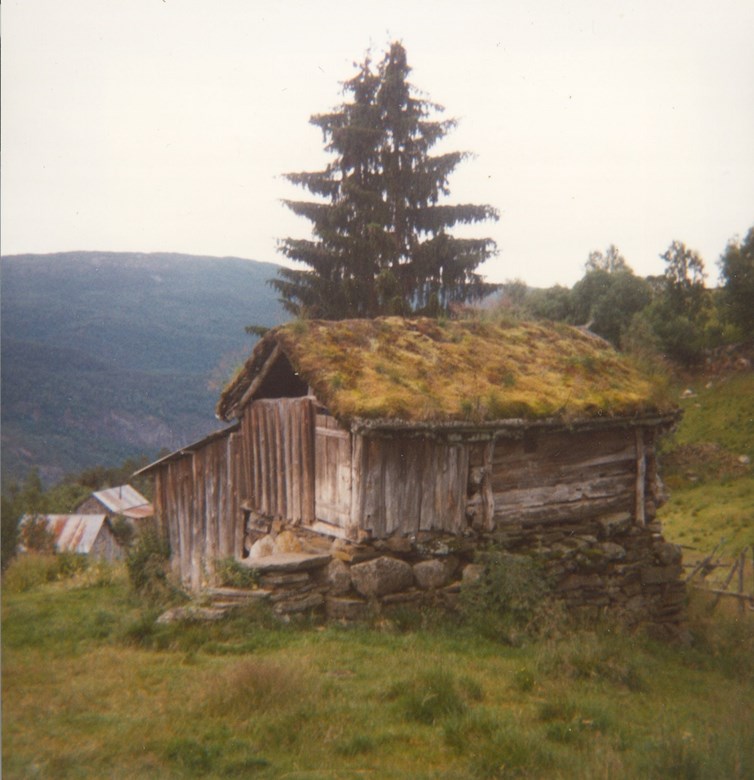 Johanna O. Steig (1866-1948) was a milkmaid for many years up to 1940. She walked "between", that is, she went down at daytime to the main farm to take part in the haymaking there. Johanna Gunnlaug (born 1932) remembers her grandmother, Stora-Johanna (literally Big or Old Johanna), telling her that she used to knit while she walked up and down to the mountain farm. From the age of two, Johanna accompanied her grandmother to the mountain farm while her parents were working in the outlying fields. This terrain could be rough and dangerous for small children.

From 1940 up to 1947 they hired a milkmaid to work at the mountain farm, but in 1947, Johanna Gunnlaug worked there as a milkmaid the summer she was confirmed. She carried out this seasonal job up to about 1968, only interrupted for two years, 1959-1960, when her two daughters Turid Karin and Liv Janne were born. In the years 1947 - 1958, Johanna also walked "between". She got up early to milk and separate the milk at the mountain farm, then she headed homeward to take part in the haymaking. It was hard going, especially when they were haymaking in the terrain above Steig. In the evening, it was time to climb up to the mountain farm again. If she was unlucky, she would have to make an extra round to bring back the cows before another shift of milking and separation and then she could finally call it a day.
From 1961, her two daughters stayed with her at the mountain farm, and then she stayed overnight up there. But when the girls were old enough to walk, they took turns to follow their mother down every other day.

From about 1968 to 1979, it was Kari Steig who was milkmaid, accompanied by her youngest granddaughter, Liv Janne. The last summer they spent only a short period at the mountain farm when the cows grazed on the cultivated field close to the houses, but were not milked.

Lars bought the field of Strandagjerdet (the mountain farm field) in 1932. This field used to be a so-calledkastegjerdefor three Ølnes farms. The field was divided into three smaller patches, the upper, central, and lower fields, each with its own holding number. As these three smaller fields were not of the same quality and did not produce the same crop of hay, these three fields rotated among the owners. The owners exchanged fields every year, and in this way evening things out over a three-year period.

The road up to the mountain farm

The old road up to the mountain farm passes by way of Skardet and the Berget farm. This road was hard to negotiate for the cows, so therefore they followed the main road, climbing either up the valley of Dvergadalen or Myrhaug, also called Maurahaugen. A new road was built in the mid 1980s after the new power station at Årøy was built, so today the road passes by way of Ølnes and England.

- We always sacrificed something when we passed by this place, that is, putting some fresh flowers or leaves into the hole. This was something my mother had learned from her grandmother, and that we children learned from our grandparents, Kari and Lars. And we were always asked whether we had remembered to sacrifice something.

Hiding-place for resistance people
Towards the end of World War II, the new mountain farm building was used by resistance people in Sogndal whenever there was a German raid in the village making it too risky to stay there. Johanna G. says that she well remembers as a young girl that she wondered why her father took with him the key to the mountain farm when he was simply paying a visit to the England farm.