The old Olden church is a wooden cruciform church located on the site called "Sjøatunet" in the village of Olden in the municipality of Stryn. The church was built in 1759 and has a seating capacity of 250. The master builder was Jon Langeland. The old Olden church used to be a "sokn" church for the Olden "sokn" in the parish of Innvik until the new church in Olden was consecrated in December, 1934. 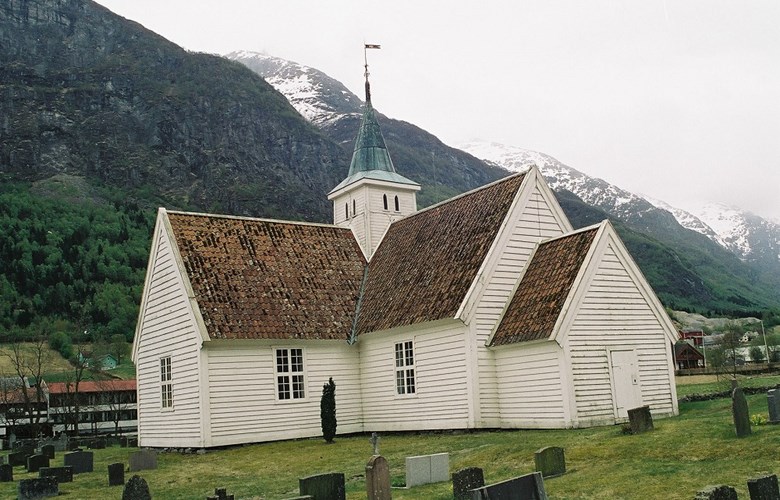 The small turret is placed directly above the cross square. It is built low to withstand the strong winds. Later additions explain why the doors to the church from the porch and the vestry are so low. Both these doors were formerly used as outer doors.

The old Olden church is the only cruciform church in Nordfjord. The reason why it was built like this was the fact that it should be able to withstand strong winds. The previous church was destroyed by a heavy winter storm, and this episode was a shocking experience for the villagers. They decided that they did not want to experience anything like this again. The church has weathered the storms for nearly 250 years, and has undergone repairs only when storms have damaged the structure. Very little of the interior has been changed.

The oldest objects in the church are some of the doors in the in-built permanent pews in the church. These date from the stave church that stood in Olden until 1746. The pews have doors with rich ornamentation. Some of these have names, initials, and dates. The chairs were allocated to the various families. Everybody had their own reserved seats, with the best seats reserved for officials and merchants. Of particular interest is the fact that the two pews closest to the northern entrance were called the Font. This is where the font previously stood, and the christening ceremony was carried out there, symbolizing that the baptism was the admission into the congregation. The word font has its origin in the Latin word "fons" which means source. These two rows of seats were reserved for the families and godparents of the babies to be baptized. When the font was moved up to the chancel, these rows of chairs were allocated to the various families.

The very special hat pegs on top of the sides of some of the men's pews date from the period when the church was new. These pegs are made of debarked young birch tops with several twigs cut in suitable lengths. 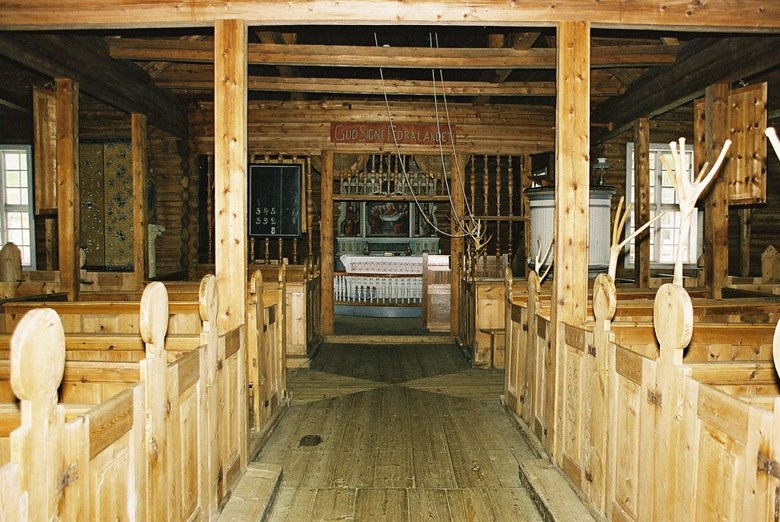 The old Olden church is built on a base composed of five squares which together is shaped like a Greek cross. The chancel lies in the eastern cross branch with a vestry behind it, and a porch to the west. These two most recent additions are rather small and narrow, and much of the material is supposedly taken from earlier (stave) church in Olden. The squares on either side of the nave measure about six by six metres, and, including the mid section of the nave, the church room between the north and south walls in the cross branches measures some 18 metres. The nave itself is some 12 metres long.

The small turret is placed in the centre of the cross square, and is built low on purpose to withstand strong winds. Later additions explain why the entrance doors to the church from the porch and the vestry are so low. Both these doors were originally built as outer doors. The pews are built in such a way that the floor leading up to the chancel has the form of Christ's cross, the Latin cross. At funerals the coffin was placed where Jesus hung on the cross. In the same place hang the ropes for the church bells, and this is where the sexton operates the chiming. 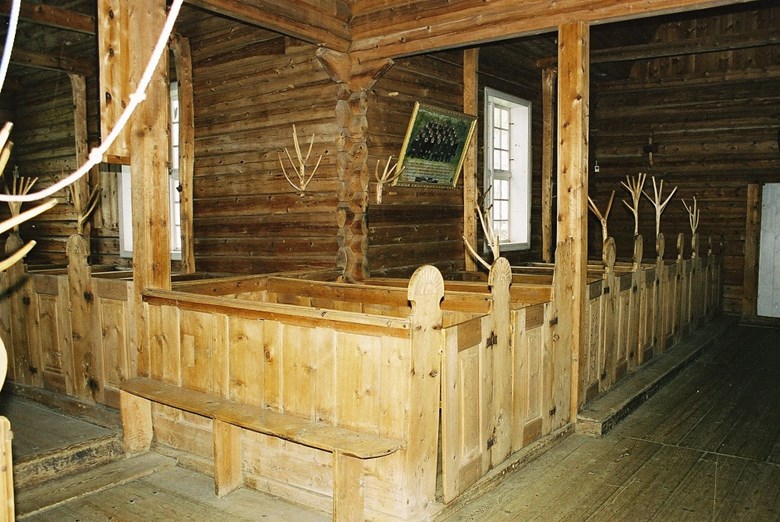 Bible from 1550 and confessional

The chancel partition runs across the entire chancel doorway, but is open up towards the vaulted ceiling. Some of the partition is built with balusters, but the lower part is built as a solid wall. In the chancel itself we find the sexton's in-built chairs. In addition, we find the two interior objects that are painted, the font and the circular pulpit on an octagonal base. The white-painted pulpit probably dates from 1772.

The most valuable interior object in the church, however, is most likely the old Bible that was published as early as 1550 by King Christian III. Up until 1970, this treasure was placed openly on the altar, but it is now stored in a safe. Upon request, it is still possible for visitors to see this exquisite copy from the first shipment of bibles to arrive in this country. Another interesting object is the confessional in the vestry. This probably dates from one of the earlier churches. On the floor beside the confessional there are deep traces from the wear and tear of shoe soles and heel irons.

Throughout the years some changes have been made on the old church. Originally the altar rail was smaller than it is now, and also pentagonal. Today the altar rail has been rounded. On the oldest photos we can see that the turret has been changed a little. Formerly it was not as wide as it is at present. The windows are small, but at first were only half the size they have now. The ceiling vaults are original, and they are unpainted like the rest of the church.

In 1969, a major restoration work was carried out on the church building itself, and the ground under the floor was partly excavated. All the interior furniture and objects were stored temporarily. During this excavation, experts from the Directorate for Cultural Heritage found remnants of earlier churches, a floor below the top floor made of much thicker and coarser material. These remnants from the stave church were removed and stored. Many other items of interest were found as well, for example a pilgrim's badge from the High Middle Ages, in addition to a number of coins. Some graves from the 17th century were also uncovered, as well as about 150 boxes containing miscarried fetuses. The remnants from the graves were put collectively in the ground before the new floor in the church was laid. The "abortion boxes" were stored in the vaulted ceiling above the church room.

The excavations also revealed many pieces of glass that could have been coloured or painted window panes in the stave church. After the excavation work, the church building was lifted in all the cross branches. Under the church a stone wall was built, and concrete foundations were made under all interior corners. The roof has been repaired many times, last time after the hurricane in 1992.

Nowadays the old Olden church is rarely used. Services are officiated on 17 May (Norway's Constitution Day) and on 29 July (St. Olaf's Day - the patron saint of Norway). Occasionally in the summer months English services are held. The church is open during the summer tourist season. Church services such as christenings, weddings, and funerals are officiated in special cases. The people of Olden are fond of their old cruciform church, which was shown in the 1920s and 1930s when the question arose whether to modernize the church or build a completely new one. Many people objected to making any changes because they were afraid this would do irreparable damage to the church, and the outcome was that the old church was left in peace on the site of "Sjøatunet".

The altarpiece from 1772 is probably made by Jan Vallentin Wedel, inspired by Andrea Pozzo and with the use of the style element called "sitting columns". The altarpiece has a magnificent framework with double sets of columns, combining canvas paintings and wooden sculptures. The artist is probably responsible for the whole work of art. The then church owner, Peder Pedersen Tonning, has his initials on the altarpiece and also elsewhere in the church room. At the bottom of the altarpiece is an inscription taken from 1 Corinthians, 1;16: "The cup of blessing which we bless, is it not the communion of the blood of Christ? The bread which we break, is it not the communion of the body of Christ" 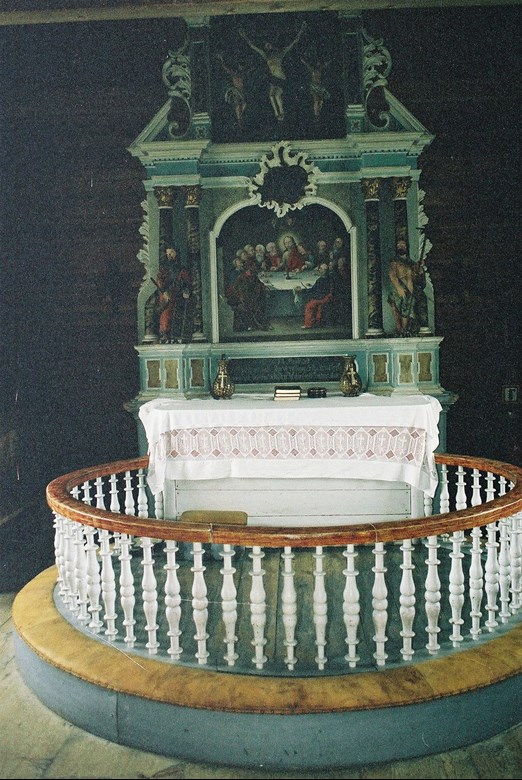 This inscription underlines that the altar is a Holy Communion table, and that the Holy Communion is a communion meal. The same thing applies to the painted picture in the main section showing Jesus' institution of the Holy Communion. At the same height and in front of the two double columns are two painted, wooden sculptures. On the left-hand side is Moses with his staff, pointing at the tablet with the Ten Commandments. To the right stands John the Baptist with a cross staff and a lamb. The latter is a reference to his words when he pointed at Jesus, saying: "Behold the Lamb of God, which taketh away the sin of the world" (John, 1;29). The upper section consists of painted, wooden sculptures, depicting the crucifixion of Jesus and the two thieves on either side. The background is a painted landscape.

On the altar there are two brass candlesticks from the 17th century. The Holy Communion set consists of a chalice and a paten, both in silver and gilded, a pyx, a wine flagon and a mug with a cross.

The baptismal bowl from the 18th century is made of pewter, the holy water ewer and the mug with the cross are undated. Above the chancel doorway is a carpet with the inscription "God bless our mother country". There are seven paintings in all from the 17th and the 18th centuries. One of the two oldest ones is a painting showing Christian III's revelation at Rosenborg castle, the other depicting "The woman taken in adultery" (John, 8) Two paintings from 1688 have a young and an old man as their motifs. The painting from 1711 is a portrait of a child, the motif probably being Rasmus P. Tonning. Two portraits from about 1750 show Peder P. Tonning, church owner from 1724, and his wife, Else Cathrine Lund Tonning. One portrait painting from 1788 shows Ole P. Tonning, and another from 1798 Peder P. Tonning, the younger.

The silk tapestry and the statue of the Virgin Mary with the Holy Infant were both given to the church in the 1950s by Mrs Singer. The colourful photo from 1910 of farmers from Olden is made and given by photographer R.A. Liset, USA. The organ is a harmonium. There are two church bells. One is called "Brusten" and is made in 1722 by M. Thomas Lydersen, Bergen. The other dates from 1663 and is made by Hans Meyer, Copenhagen.

The pews in one of the cross branches. The in-built permanent pews probably date from the stave church which stood on this site until 1746. They have rich ornamentations, some with names, initials and dates. On the pews there are hat pegs made of debarked young birch tops. Some of the ropes for the church bells can be seen as well.
Owner: Stryn fellesråd. - Date: 2003. - Photographer: Svein F. Rønne.
Stryn fellesråd.
2003.
Svein F. Rønne.