David Olai Lund, better known as Filippiner-Lund, is regarded as one of our greatest missionaries. He saw early where he had to go and prepared very carefully for his mission. Together with his wife he spent all his strength in their missionary work in the Philippines. 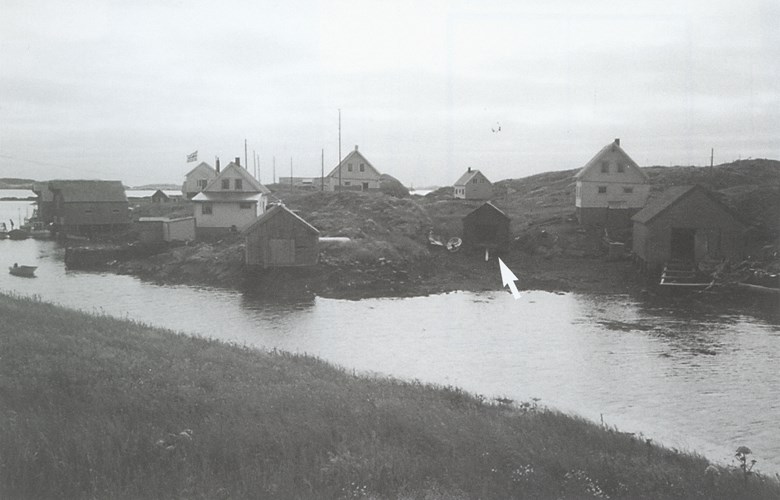 View of Indrevær. The arrow in front of the boathouse shows the site of David Olai's childhood house. Here on the small island he as a child had the missionary calling, and here he laid the foundation and prepared for his great lifework as a missionary. The house beside the flag is David Lunds Minne, a chapel built in memory of David Olai.

In a small house, with a smoke vent and an open fireplace, close by the water's edge at naked, weather-beaten Indrevær David Olai Rasmussen Indrevær was born on 22 December, 1863. His parents were poor, hardworking cotters, who made their living from the sea. Little David Olai was christened at home by the teacher Torkjel Jensen, and one of the godfathers, who lived close by, became important for the child's intellectual development. David Olai had inherited his father's high abilities. His mother was known for her beautiful singing voice. David also inherited a good singing voice, and, in addition, he had an exceptional general talent for music. In his youth and later he played the guitar well, and also the organ, and the piano.

By way of the fishing-boat

In one of the neighbouring houses a boy his age lived. They were very close friends, and they later went together to Nordland to fish, sharing the proceeds.

One year David Olai fished cod out of Ålesund. One summer the herring fishing was quite successful. All of this was important because he had to get an education to realise his missionary calling. His parents were unable to give him any financial help.

The journey took him to Bodø, where he graduated from middle school with top marks, probably in 1886. A year later, he walked from Lærdal across the mountains to Valdres and on to Oslo. With the guitar on his back he visited remote communities, sometimes as a preacher, sometimes as a singer. In this period, he attended a preachers' school in Ørebro in Sweden, and a course in medicine with doctor Finne in Oslo.

David Olai often met people who helped him financially for a time, and this probably helped him go to America around 1890. For several years, he worked at farms and factories in the summer and studied in the winter. For some time he worked for a well-to-do Swedish-born farmer whose name was Lund, and who was single. He became so impressed with David's Christian conduct, and so grateful for his own salvation, that he offered David to inherit him if he would take the surname of Lund. David Olai accepted. David Lund was also an easier name to travel the world with.

To the southern Philippines

In America David studied at the Augsburg Seminar in Minneapolis, where he was highly valued for his gifts and his knowledge. His last year in America was spent travelling around giving sermons. He also visited the West Indies and Japan, where he studied medicine. When he came home, he married Swedish-born Hulda Frikmann, who was a teacher in the USA.

The Philippines, and in particular Mindanao, became the field of mission for the two of them. Spain had to cede the islands to the USA in 1898. After the Spanish had converted the people, partly by military force, a substantial part of the population were a kind of Catholic when Lund arrived there in 1901.

Self-sacrifice to the end

Both Lund and his wife knew Spanish when they came to the Philippines, and they took up their missionary work at once. At the start, they preached in the streets and in shops. Later they had small and simple churches. The Americans began to build roads, and that made it easier for them to get to the interior of the islands. Lund worked for some time on the Sulu islands, where the challenges with topography and people were even greater. Mission friends at home in Norway and in other countries supported him financially. His wife had a Sunday school, and in a manner difficult to understand she managed to start up and run a home for orphan girls.

Lund made three trips to Norway by way of America, but otherwise he and his wife worked tirelessly at their mission until they died, he in 1925, she around 1940.

David Olai Rasmussen Indrevær was usually called Filippiner-Lund. Here he is dressed up in his Sunday best for the photographer. He was usually not much preoccupied with clothes. On all his three trips back to Norway, he visited Indrevær and his parents. On one of the trips, in 1913, the people in the community made a big farewell ceremony for him in Straumskyrkja (church), and Bernt Kverhellen wrote a beautiful song of tribute to him.
Owner: Hans H. Steinsund. - Date: Ca. 1950. - Photographer: Ukjend.
Hans H. Steinsund.
Ca. 1950.
Ukjend.

In 1961, the people of western Solund built a chapel at Indrevær in memory of the great missionary from the island. The house, which is the only chapel of its kind in Solund, has the name of David Lunds Minne (memorial). Parts of the house have been used as a residence. The picture is from the consecration.
Owner: Aud Bjørknes. - Date: 1961. - Photographer: Aud Bjørknes.
Aud Bjørknes.
1961.
Aud Bjørknes.

David Olai Lund was called Filippiner-Lund because he was a missionary in the Philippines. He worked most on Mindanao, but he was also for a time on the Sulu islands.
resources:
Solem, Johs.: Filippiner-Lund. Lunde & Co. Bergen 1944.
Engevik, Reidar: Husøy kyrkje 100 år. 1896 - 1996. Solund 1996.