Hans Seip (1881-1945) was county governor in Sogn og Fjordane from 1929 until he was removed from office by the Nazi regime in the summer of 1941. He then moved to Fjærland. In the early weeks of 1945, he fell ill and died on 14 March the same year. Upon his request he was buried in Fjærland. In 1949, the county council erected a memorial stone on his grave. 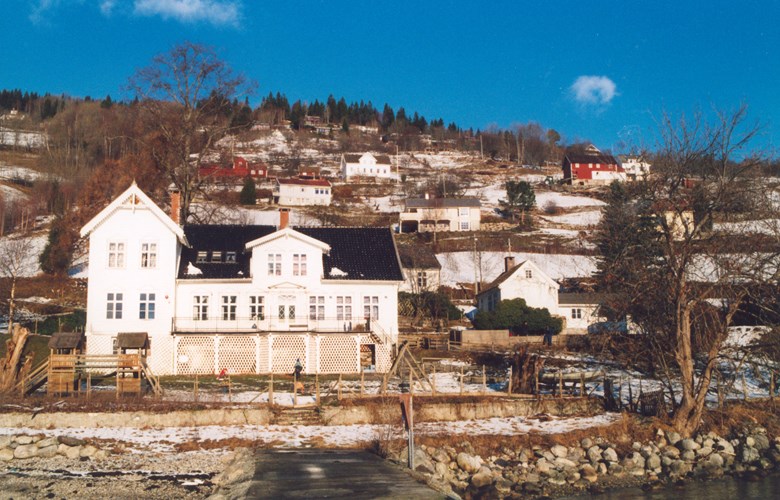 The county governor's house at Leikanger, residence and office for the county governor of Sogn og Fjordane in the years between 1862 and 1974. From 1985, the house has been used as a kindergarten.

Hans Kristian Seip, born at Røyken, 6 November, 1881, son of vicar Jens Laurtiz Arup Seip and Marte Fredrikke Aubert. Degree from Kristiania tekniske skule (Technical College) in 1900, studied in Switzerland 1902-1903. From 1900 to 1915 he was employed in the Public Roads Administration, later working as a sectional engineer in Bergen from 1915, head of the Road Office in Bergen from 1921 to 1929 when he was appointed county governor of Sogn og Fjordane. In 1941, he was removed from office by the German authorities, then moved to Fjærland. He died at the hospital in Lærdal on 25 March, 1945.

He was mayor of Bergen, was a member of a number of boards and committees. After his death, a book he had written about the county of Song og Fjordane was published. He was married to Inga Larssen, daughter of a merchant in Koparvik, Ingebret Larssen and Thorunn Sandvig.

Eulogy in the Storting (the Norwegian Parliament)

Hans Seip represented the liberal party "Venstre" for the county of Sogn og Fjordane in Stortinget in the years between 1934 and 1940. When the Storting from 1940 was reconvened after the war years on 14 June, 1945, nine of its representatives had passed away. The President of the Storting, Hambro, gave a eulogy on each of these. He said the following about Hans Seip:

He represented the county of Sogn og Fjordane, and was chairman of the standing committee for military affairs. All of us who worked with him realize that he leaves a huge empty space where he sat. We remember him particularly for his participation in the negotiations over the past few years, his enthusiastic and competent attempts at reaching agreement in the many complicated issues he had to deal with as chairman of his committee.

Eulogy in the County Council

When the first county council after the war convened in Fjærland on 3 September, 1945, the acting county governor, the bailiff N. O. Øvrebø from Jølster, opened the assembly by saying these words in memory of the county governor Seip:

Seip came to this county at a difficult time. The county experienced an economic crisis, and so did the primary municipalities. It was far from easy to take over the administration of the county, but it quickly turned out that he was the right man for the job. He was well qualified, and with his capacity for work, he immediately set out to find solutions to the many problems facing the county. He left his mark in more ways than one. However, he was not only a force in his public office, he was also a great man, and, consequently, we could always learn something by co-operating and just being with him. He was always able to give something. He was indeed an unusually energetic person.

The same county council resolved to ask the Seip family for their permission to erect a memorial stone on his grave. The stone was erected and unveiled on Sunday, 19 June, 1949. The county council met in Førde that year, and as a conclusion to the assembly, the county council members travelled by bus across the Gaularfjell mountain pass down to Vetlefjorden and further by boat to Fjærland.
Mrs Seip, the widow, and her son Inge, attended the ceremony.

The hotel owner Dahle made a welcoming speech before the congregation sang a hymn that Seip wrote shortly before his death, a farewell hymn: "Now Christ be praised for every single day in our lives". Dean Reed spoke based on the text from Luke 24 on the words of Jesus to his disciples to be prepared to be "endued with power from on high". This was the same text Seip himself had used in the very same church on Ascension Day, 1994.

After the service people gathered at the grave where the memorial stone was wrapped in white cloth. The chairman of the county council, P.S. Hjermann, the mayor of Lærdal, gave the memorial speech. Towards the end of the speech he said:

We are gathered here today by the memorial stone erected by the county council. Many of us have good memories of him that we are grateful for. He was in the midst of his people , as it were. Their sorrow and happiness was his as well. Their vigorous faith in God was his; their language - the Norwegian language - was his, and the hopes for the future for the people of Sogn og Fjordane were his, too.

Therefore, we unveil his memorial stone. Here he will rest, and here we will pay our respect and bless his memory today.

You carried out your work,
You did it well.
You rest in peace, You rest and are blessed.

Mayor Hjermann then gave the stone to the Seip family, and Inge Seip expressed his thanks to the county council. - Father loved the people here, he said, and thought highly of it.

The County Council in Fjærland in 1941

Leiv Revheim was employed as an assistant clerk at the county governor's office in the autumn of 1937. He wrote an interesting article on "the man and county governor" Hans Seip in the magazine "Jul I Sogn 1997". Revheim was present at the county council meeting in Fjærland in June, 1941, the first after the NS-regime by the decree of 21 December, 1940 had introduced a reorganization of the municipal management and administration. He gives an account of events and actions which were not recorded in protocols or any other document, but which are important to get the full picture of the division and tension between the NS-dominated group of this county council and the opponents, as well as the position of the county governor.

Revheim remembers clearly when the county council attended a church service. Many national hymns were sung. The county governor, Hans Seip, went up to the chancel and gave a short speech where he solemnly criticized everybody who had betrayed their mother country.

Both these events, in addition to what was recorded in the minutes, the county governor's refusal to send a salutatory telegram to Quisling, bear testimony to a strong conviction and made a strong impression in both camps. Seip was removed from office shortly afterwards, on 25 July, 1941.

Book on the county

The years in Fjærland the former county governor spent on writing a book on the county of Sogn og Fjordane fylke in the period between 1837 and 1937. This work was practically finished when he fell ill and died. His family handed over the manuscript to the county administration in 1945, but it would take 13 years before the book was published in the winter of 1958.

Hans Seip's book, Sogn og Fjordane fylke. A Contribution to the Municipal History, is a major contribution to the history of the county, a "classic" reference book, - on communication, health care, and education, on agriculture and forestry, the most important industry during this period, as well as on the development of hydro-electric power. In addition, the book contains a survey of the county governors during this century, and administrative organization and changes.

The county of Sogn og Fjordane

The county of Sogn og Fjordane was established in 1763 under the name of "Nordre Bergenhus Amt" when the former "Bergenhus Amt" was divided in two. The borders were fairly similar to the present ones. Oppheim "sokn" belonged to the "Nordre (Northern) Amt" and parts of Gulen to the southern county. Later on, two farms in Stryn were transferred to the present county of Møre og Romsdal.

The name was changed to Sogn og Fjordane by law of 14 August, 1918. There were two other alternatives to be used as names: "Sogn og Fjordane syssel", and "Sygna og Firda Syssel".

"Nynorsk" is the official language used by the county of Sogn og Fjordane, first gradually introduced from 1923, last confirmed in 1995.

The memorial stone on the grave of Hans Seip in Fjærland. The inscription at the back: THE COUNTY ERECTED THIS STONE
The stone came from Viksdalen in Gaular and the teacher Harald Bell was the contact person for the county governor. Bell asked Lars Hoff to get hold of the stone and write the inscription. Hoff even went to Fjærland and made sure that the stone was firmly placed on a concrete foundation.
The stone at the foot marks his wife Inga, and his sister Thorunn.
Owner: Fylkesarkivet i Sogn og Fjordane. - Date: 2000. - Photographer: Hermund Kleppa.
Fylkesarkivet i Sogn og Fjordane.
2000.
Hermund Kleppa.