The village of Fresvik is located on the southern side of the Sognefjord close to the entrance to the Aurlandsfjord. The village now belongs to the municipality of Vik, but was formerly within the boundaries of Leikanger municipality. The main industries in the village are traditional agriculture and tourism based on the beautiful countryside, and it has a rich cultural-historical heritage. 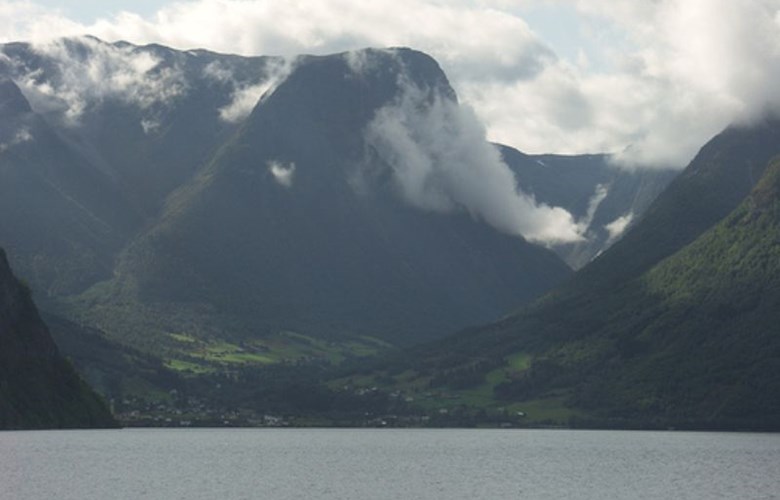 The village of Fresvik seen from the fjord.

The name of the village was originally Frøysvik, derived from the heathen God name of Frøy ("-vik" means bay). From the Old Norse mythology we know Frøy (Frey) as one of the Vanir gods, who after a battle with the Æsir gods was exchanged as one of the hostages along with his father Njord and his sister Frøya. Above all, Frøy was the god of fertility and weather, in addition to prosperity, happiness and peace. There are strong indications that Frøy was a much worshipped deity in the early Iron Age, at a time when crop and growth meant much to people who cleared land and made a living as farmers. Per H. Bøthun imagined that the farm Hov could have been the site where the "hov" (the heathen place of worship) of Frøy could have been located.

The farm Bøtun seems to be the oldest farm in the village, and the other farms may have their origin in this farm. This is mainly based on etymology, where the first part of the compound "bø" is derived from the Old Norse "bær/byr", meaning farm. Connected to the second part "-tun" (farmyard) it is easy to conclude that the whole place name means "the farmyard on the farm". This probably occurred when the population on the farm increased and more farmyards were established. The name Bøtun, then, arises from a need to name the oldest farmyard of the original farm.

The Fresvikbre glacier covers an area of about 15 square kilometres and is located to the east of the mountain called Huldakyrkja, to the east of the village of Fresvik. The highest point on the glacier is 1648 metres above sea level, but the glacier branches reach down to 1200-1300 metres above sea level. On the branches it has been possible to climb without the use of ropes, in contrast to the main glacier a few hundred metres away. To the south of the glacier we find the mountains of Langafjellet and Handadalseggi, rising respectively to 1511 and 1431 metres above sea level. At Handadalseggi various old hunting installations have been found in the form of guiding fences, pitfalls as well as built-up positions for using bow and arrow to hunt reindeer. These guiding fences are also found near the Fresvikbre glacier, where some of them even disappear under the icecap. This is a visible proof that the icecap was less eztensive at the time when these hunting installations were in use, back to the Iron Age or even earlier.

A wood nymph legend from the valley of Heljedalen

To the east of the Fresvikbre glacier lies the valley of Heljedalen, where there used to be a mountain farm in the olden days. According to a legend, a young milkmaid at the mountain farm was much troubled by mischievous wood nymphs. Every Saturday night she was chased by a group of wood nymphs and one of them even wanted to marry her. In order to keep "the little people" away from her, her boyfriend had to walk up to the mountain farm and play on his Jew's harp. One evening, however, he had lost his instrument, and the wood nymph party had started to dress up the girl in bridal clothes. The boy ran down to the village to fetch the vicar, and he carried holy fire up in the valley to ward off the wood nymphs. After this episode the valley has been called Heljedalen (the holy valley).

All the farms in the village have mountain farms (summer farms) in the mountain area of Fresvik-Jordalen. The trail to the mountain farms is 30 kilometres and takes six-seven hours. At some points the trail crosses the outskirts of the glacier and its highest point is at Rjupeskar, 1240 metres above sea level. A landmark along this track is the cairn called Fresvikvarden, where sacrifices have taken place until recent years. In the local history book from 1965, Per H. Bøthun outs forward an interesting theory that the cairn, originally called Røssevarden, was built to honour the god Frey. The word "røss" is derived from the Old Norse word "hross" (=horse), and we know that Frey was associated with horses and horse cult. The Fresvik-Jordalen area is well known for its excellent pastures, and there are many references to disagreements between people from Fresvik and Vik as to the use of these mountain farm areas. 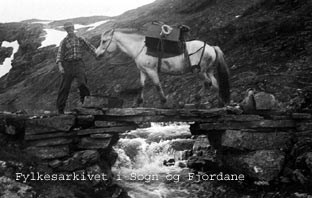 The present population of Fresvik is about 280, and apart from farming, the main employer is the factory called Fresvik Produkt. The summer is the most hectic season with many Norwegian and foreign tourists visiting the place to enjoy the beautiful countryside and the many excellent hiking alternatives.

An old picture of Fresvik seen from the fjord. Boathouses and residences are located down by the seaside with the church as a towering backdrop.
Owner: Solveig Hjortland - Date: 1920-1940 - Photographer: Ukjend
Solveig Hjortland
1920-1940
Ukjend

The farm Hov is the place where Frey's old heathen place of worship may have been located.
Owner: Jon Tretteteig - Date: 1939 - Photographer: Ukjend
Jon Tretteteig
1939
Ukjend

Hans M. Hov and his packhorse on their way across the stone bridge at Vassosen. They are heading for Jordalen by way of crossing the Fresvik glacier.
Owner: Hans M. Hov - Date: 1954 - Photographer: Ukjend
Hans M. Hov
1954
Ukjend
resources:
Bøthun, Per H.: Leikanger Bygdebok. Band I. Leikanger 1965.