In the autumn of 1940, The German navy started the construction of a coastal fort at Tangane. The construction work was led by Germans, but much work was carried out by Norwegian entrepreneurs and workers. 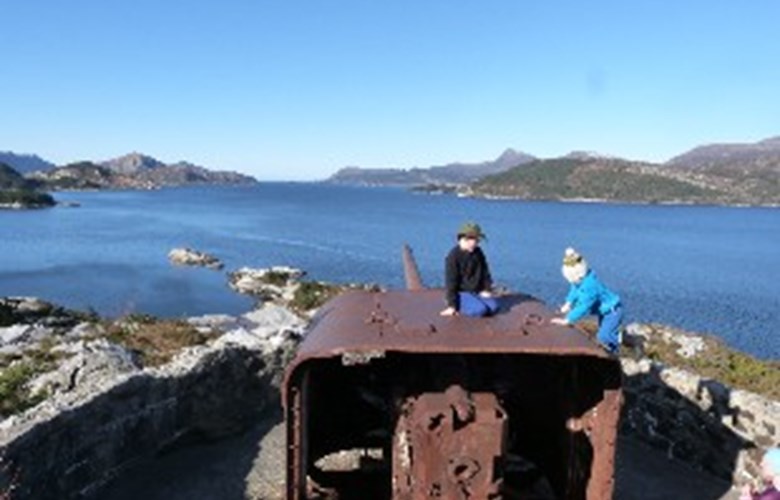 The purpose of the coastal fort guns was to reach targets on the Vågsfjord, and thus control the seaward approach to Måløy and the entrance to the Nordfjord. As was the case further south at the mouth of the Sognefjord, it was of vital importance to the German navy quickly to establish defence installations at the entrance to the Nordfjord. Consequently, in 1940, the German navy started the building of a torpedo battery at Angelshaug, and a coastal artillery fortress at Tangane, on the westernmost part of the island of Rugsundøy. A number of the barracks were installed with central heating, inlaid water, and electricity from a generator. The battery also consisted of a cannon troop at Kråkenes on Vågsøy, where a radar was installed as well. After the German capitulation in 1945, the battery was taken over by the Norwegian Coastal Artillery under the name of Rugsundøy Fort. Barracks and cannons were left intact while the Norwegian Defence authorities were considering the future use of the battery, but around 1950, their plans were scrapped and the battery was finally closed down.

Cannon from the Russian Tsar's fleet.

The first two cannons that came to the battery in the spring of 1941, came from the Russian battleship "Imperator Alexandr III", launched in the Black Sea in April, 1914. This battleship was part of the Russian Tsar's Black Sea fleet, but in 1920, the ship had to leave the Black Sea, and headed for the French naval port of Bizerte in North Africa. The battleship stayed in this port until 1933, when it was condemned by the French. Six years later, during the Finnish-Russian Winter War of 1939-40, the French decided to ship the old battleship cannons to Finland as military aid. On 9 April, 1940, the Finnish cargo ship "Nina" was docked in Bergen with the cannons on board. The very same day, the Germans occupied Bergen and the ship was not allowed to leave port. Four days later, the ship was damaged in an English air raid, and the Germans went on board to inspect and assess the damage. There they found the cannons, and after a while they decided to make use of these in their own coastal defence of Norway.

This is how in May, 1941, these two Russian 13cm ship cannons model 1915 from the Tsar's Black Sea fleet - also referred to as the "Nina" guns named after the Finnish cargo ship - ended up on the island of Rugsundøy. After the Måløy raid in December, 1941, both cannons were removed from the fort. During the summer of 1942, the battery replaced these two old guns with two new and modern Russian 13 cm ship cannons model 1940 with a range of up to 20,100 metres. At the same time, a third cannon was added to the fort, but it was just another of the old type of Tsar guns which remained there until the end of the war. After the war it was sold as scrap iron, whereas one of the newer 1940 models still remains.

The commando raid on Måløy

On 27 December, 1941, British and Norwegian troops carried out a raid on the Germans at Måløy. The raid was a combined operation involving planes, navy vessels, and commando soldiers. The forces that took part in the land operation consisted of 543 British commando soldiers and a troop of 33 men from the Norwegian Company Linge under the command of Captain Martin Linge. The objective of the soldiers was to go ashore at or around Måløy, defeat the German forces in the Måløy area, and destroy German installations and Norwegian factory facilities. After some fierce fighting, the commando soldiers withdrew from Måløy in the afternoon and returned to England. This action, referred to as the Måløy raid, was the only time that German forces along the coast of Norway had any direct encounters with British troops.

The battery in action

In the early dawn of Saturday, 27 December, 1941, the British naval fleet entered the Vågsfjord at slow speed. It was led by the cruiser "Kenya", followed by four destroyers and two ships transporting troops. The cruiser was the flagship, and anchored up in the Vågsfjord close to the harbour of Måløy. While the landing craft were speeding in towards Måløy, British airplanes bombed the battery at Tangane. In the course of the day, the three anti-aircraft cannons were brought into action against the air raid. The Germans managed to fire some rounds of shells with the two antiquated Tsar guns. At distances ranging between 7,700 and 8,200 metres, the battery tried to hit the cruiser "Kenya", but due to technical problems, the battery could only fire a total of 35 rounds of shells at the cruiser. One shell hits "Kenya", but only minor damage was incurred. The cruiser returns the fire, and after the fighting, Germans report that between 150 and 180 shells hit the area. At Rugsundøy one German soldier lost his life, with eight other casualties.

Some facts and figures of the Tangane coastal artillery fort:

In 1998, the cultural officer in the Bremanger municipality started a project for clearing, planning and putting up information boards at the coastal artillery fort at Tangane. In conjunction with the landowners and the Tangane cultural society, a number of paths and bunkers have now been cleared. The plans also included the maintenance of the old German mess hall which has been used as an assembly hall in the post-war years. In 1999, three large information boards were also completed and placed on the fort site. With the new road connection to the Bremanger mainland in 2002, visitors are no longer dependent on using boats to get to Rugsundøy and Tangane.

In the summer of 1942, two new Russian 13 cm ship guns model 1940 came to the battery to replace the two old Tsar guns. In order to install one of these new guns, a special transportation arrangement had to be built to hoist it up the mountainside. This gun is still standing.
Owner: Kystartilleriet. - Date: Ca. 1942. - Photographer: Ukjend.
Kystartilleriet.
Ca. 1942.
Ukjend.

The picture shows one of the old Tsar guns, a 13 cm ship cannon, model 1915. With two cannons of this type the battery 'Nordfjord' was in an artillery duel with the British cruiser 'Kenya' during the Måløy raid on 27 December, 1941.
Owner: Kystartilleriet. - Date: Ca. 1946. - Photographer: Ukjend.
Kystartilleriet.
Ca. 1946.
Ukjend.

In 1994, the German Bernhard Schaller returned to Tangane where he as a 19-year-old soldier experienced the Måløy raid at close range. The picture shows him standing on the foundation of the anti-aircraft gun where he formed part of the crew during the fighting. He says that the airplanes came into the fjord and released their bombs on the fort. One bomb struck down right in front of the gun position, but in a miraculous way he survived, even if his uniform caught fire.
Owner: Kjell-Ragnar Berge. - Date: 1994. - Photographer: Kjell-Ragnar Berge.
Kjell-Ragnar Berge.
1994.
Kjell-Ragnar Berge.