Vangen church is a longchurch built of stone at Aurlandsvangen. The church, in an early Gothic style, is probably built in two turns in the 13th century. The church was restored both in 1861-1862 and in 1926. Vangen church is a "sokn" (sub-parish) church for the Vangen "sokn" and is the main church in the Aurland parish. 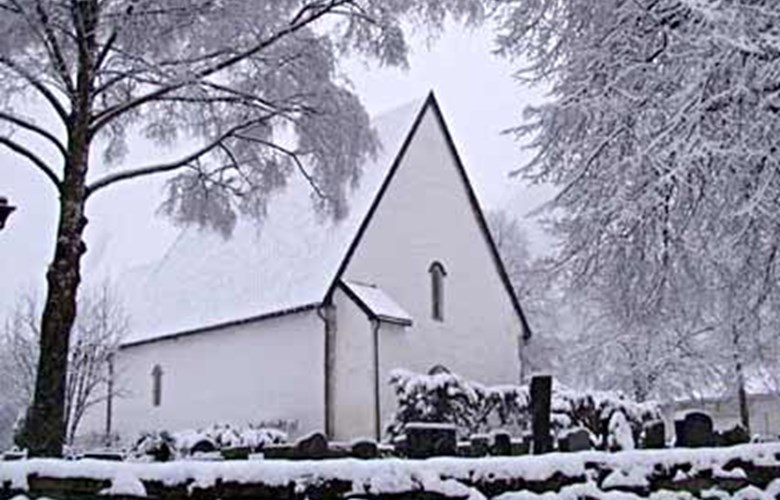 Vangen church in Aurland is the closest we get to a cathedral in the county of Sogn og Fjordane. Elegant and beautiful the church has an ideal location at Vangen with majestic mountains as a backdrop. It is no wonder that the church is also known as "Sognedomen" (The Sogn cathedral).

Built in the 13th century

The church site is on the flat river plain where the village centre of Aurlandsvangen is located. The early history of the Vangen church is unclear, and there is no written reference to the church until 1498. The church is not mentioned in the "Bjørgvin Kalvskinn" (cadastre) from the 14th century. The stave church at Rygg was then the "sokn" church. A vellum manuscript found in the old altar revealed that the cornerstone for the Vangen church was laid on 2 May 2 1202. The vellum manuscript was unfortunately lost after the restoration work in 1861-62. The local historian points out that king Sverre, who had strong family ties to Aurland, died in March 1202, and he may have ordered the building of a stone church at Vangen.

The construction method and the early Gothic style indicate that the church can be dated to the late 13th century. There are in fact many parallels to another Vangen church at Vossevangen which was completed in 1277. The south portals in the two churches are strikingly similar, both churches have three windows in the east wall of the chancel, which is quite rare, and the general building method is fairly similar. According to Leif Anker, the churches may have been built by the same craftsmen, and he dated the Vangen church at Aurland to the latter half of the 13th century.

Vangen church is the biggest of the seven stone churches in the county. Its chancel is actually bigger than the whole Undredal stave church. Experts believe that the church was built in two turns, where the present chancel first was the nave. The oldest part of the church may date from the first half of the 13th century. Towards the late 13th century, an addition was built to the west with a big nave, completed about 1300.

The church building itself is simple, solid and impressive. The walls are whitewashed and have a thickness of 1.3 to 1.6 metres, and a height of six metres both in the nave and in the chancel. The ceilings in the nave and the chancel have the same height. There is no church tower but instead there is a freestanding bell tower. All the portals have pointed arches, one door portal to the west and two to the south. There are altogether five original windows, three on the east wall of the chancel, one on the west wall and one on the north wall of the nave. In addition, there are two big round-arch windows in the nave and chancel which are a more recent extension of previous windows. The portal on the south wall is richly decorated, whereas the portals in the nave are far more simply decorated.

Towards the west there was formerly a porch made of wood, but this was torn down in 1926. The west portal leads you directly into the nave under the gallery that can be reached by two staircases on either side. Previously the church had galleries both on the north and west sides of the nave. The first thing you notice to the immediate left of the entrance is the holy water vessel on the wall. This is where the churchgoers washed their hands before entering the church. The church room is magnificent with a height of 18 metres up to the gable.

In the chancel there are three windows side by side on the east wall, which is a characteristic feature of early Gothic style. Stained-glass paintings made by Emmanuel Vigeland have now been installed in the windows which harmonize better with the low altarpiece from 1926. This is a marked contrast to the big, old altar picture that prior to 1926 blocked some of the light from the three windows.

The plaque commemorating the merchant Niels Michelsen from Bergen is a unique example of how such a plaque can be used as an appeal for revenge. Michelsen drowned on 23 October 1613 during a trade expedition and was buried at Vangen church. According to the plaque text, it was put up by the widow Trine Henricksdatter, and it also contains a Bible text from Psalms 109,1-22, a psalm of revenge. The widow did not accept that this was a mere drowning accident. The motif on the memorial plaque is painted by T. Gunnarson, portraying a long and wild woman's cry over an unavenged murder, expressed in the form of a pious memorial plaque as part of the church decoration and in God's honour. It is an appeal to God, the eternal judge, fastened to the wall of the holy house, as an accusation that the possible killer would see every time he came to church: Let him be condemned (Psalms 109,7).

Vangen kyrkje is the biggest stone church in the county with a nave measuring 18 by 13 metres and a chancel measuring 10.4 by 9.6 metres. The interior area of the nave is 150 square metres, whereas the chancel measures 63 square metres.
Owner: Aurland kyrkjekontor. - Date: 2002. - Photographer: Bjarne Aagaard.
Aurland kyrkjekontor.
2002.
Bjarne Aagaard.