Funds for new public roads were in the 1930s mainly allocated to interior regions and to linking roads. The need for roads in the county of Sogn og Fjordane was massive, and it was therefore difficult for petitions to be heard. But for the Solund municipality it was a question of improving the living conditions for its people. The struggle for state road 606 thus became a very important political issue for the politicians from Solund during the years after the war. In 1967, the road was finished. Today the road is listed as a monument. 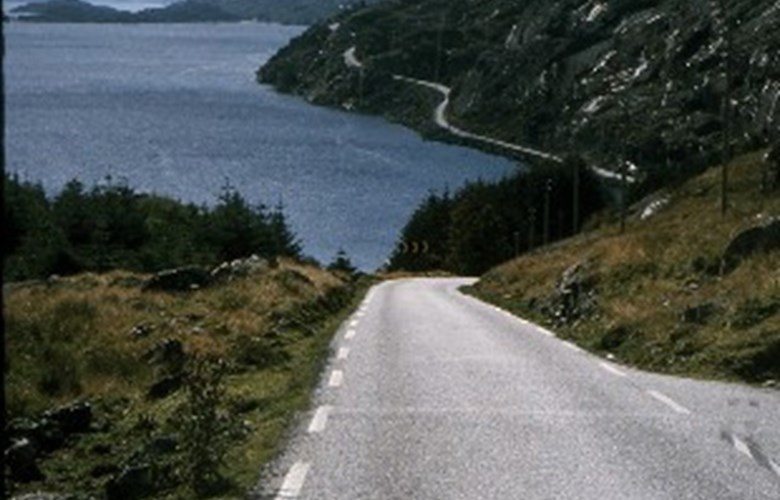 State road 606 from Krakhella to the municipal centre is classified as a listed national monument. In the protection plan the road is presented as an example of road realization in coastal areas, which is an important feature of Norwegian road building history in the 1900s. The road has been little changed and thus gives a good picture of the standard and implementation of linking roads in the 1950s and 1960s. The road is built into the landscape and gives the traveller a chance to experience the coastal environment. The road was built in this way across the islands, in order that as many as possible could make use of it. It was built with one lane only, as it still has.

In the report from a communications committee in 1919, Solund is described thus: "The municipality in terms of communications completely relies upon the sea. Roads are non-existent." A road between Nåra and Straumen and between Hardbakke and Strand was proposed, but other than that there were no concrete plans for road building in Solund until the road plan was presented in 1940. Because of the war situation in the country, the county governor suggested that the project be put on ice. After the war the road issue was once again brought up.

The Nåra-Kolgrov road is built

The first automobile road project which was allocated funds was the section Nåra-Kolgrov in 1939-1940, from the budget item called roads in coastal areas. It measured 4.5 kilometres, and the sum was NOK 22,000. It was argued that this road in the west of Solund was one of first roads which ought to be built in the coastal area. In storm or rough weather the vessels could not call on the west side of Nåra, and travellers had to make their way to the east side of the island. Work on the road began in 1941 and was finished in 1967. 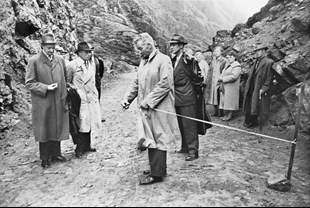 The road Strand-Hardbakke, proposed in 1919, did not seem to be given high priority, but the section Vaulen-Hardbakke was. This project was included in the budget for 1938, under the item - emergency employment. It measured 11 kilometres. The yearly allocations were small. NOK 20,000 came each year from the state and the county, while the municipality and interested individuals contributed each 10%. The consequence was a very long construction period. The road was not finished until 1960, and became a part of state road 606, Hardbakke-Krakhella.

The scheduled steamship service after the war was rather unsatisfactory to the people in Solund. There were few departures and few stops for Bergen. The Wednesday service from Bergen took 19 hours to get to Krakhella. Since the municipality had no automobile roads, scheduled sea traffic was not profitable, and so Fylkesbaatane (steamship company) was unwilling to consider new services. A precondition for better communications by boat became paradoxically a network of roads. The politicians in the municipality all agreed that roads and better sea communications were needed. The problem was to have the roads included in the road plans and the budgets in a short time.

Struggle for road across Solund

At the county council session in 1949, the steamship schedules and roads in Solund were discussed. The county public roads director and the county governor were in favour of road improvement. The municipal council asked in a unanimous petition for a "new project Krakhella-Eidevågen". The county public roads director wrote that the project "should be classified as a main road in coastal communities, and therefore cannot be allocated county funds. In the ten-year plan which has been presented to the county council, the project is regrettably not given priority. But the realization of this project will obviously revolutionize communications in Solund, so work will be done to find a solution if possible". The county governor said in his recommendation to the county council that it was advisable to get the building of the road started as soon as possible, for example through advance payment.

The road was never classified as a main road, but as a local road. For the municipality it was impossible to build the road as a local road with only 50% state contribution. The next step was therefore to have the road classified as a state road. The municipal council also asked that the road be built across the whole municipality from Kolgrov and as far as to Krakhella. If this were not possible in the ten-year period, the council asked that the project Eidevågen-Krakhella be realized. It was difficult to get the road classified as a main road. The roads director gave a negative answer.

The building of a high-voltage power line in 1950, in part along the projected road, made for a quick building of the road. The municipality was willing to advance NOK 35,000, and to start up the work. The county governor accepted this, adding that the project had been classified as a main road. Yet public funds were still missing.

Many years came to pass before the road was planned in detail, and building could begin. In the period 1950-1955 there were countless meetings, several surveys, and the municipality even sent representatives to the public roads director general in Oslo. The minister of communications and the roads committee of the Storting (Parliament) were also involved. In 1955, Fylkesbaatane promised to advance up to NOK 150,000. The municipality borrowed NOK 3,000,000.

The building is in progress

On 2 November 1954, the building began. On 19 September, 1960 the road was officially opened. Included in the project was a steamship service between Krakhella og Rysjedal. A new day had begun for the people of Solund. But only in 1972 were ferry quays built. M/F "Firda" was the first ferry in scheduled traffic between Solund and the mainland. This ferry was used until the end of the year, when the new seagoing M/F "Nesøy" took over.

The continuation of state road 606 from Hardbakke to Ytre Steinsund was finished in 1967. A bridge had been built across Rørdalsfjorden (built 1960, the old Langebrua in Førde had been used), and a bridge across Indre Steinsund (built 1963). In 1974, a ferry was set in traffic between Daløy and Nåra. The first ferry was called "Nårasund" and was privately operated. It was made of wood, and the capacity was ten cars. In the autumn of 1979, Nåra-Daløy became part of the county road. The "Nårasund" number two was set in, a steel ferry with the same capacity of ten cars. In 1990, it became too small, and a third "Nårasund" took over.

The first years after the road to Hardbakke was finished, there was only an ordinary quay at Krakhella. The cars were lifted ashore or driven ashore and on board on planks. Only in 1972 was the ferry quay built. In 1975, the triangle service Rutledal (Gulen)-Krakhella-Rysjedalsvika (Hyllestad) was established. The ferry quay is also listed as a monument, because it was a precondition for the road.
Owner: Statens vegvesen Region Vest. - Date: Ukjend. - Photographer: Olav Handeland.
Statens vegvesen Region Vest.
Ukjend.
Olav Handeland.

The opening of the road on 19 September, 1960. The ceremony took place a short distance up from Hardbakke. The ribbon is cut by the county governor Nikolai Schei. Still parts of the road were not navigable. On the left are mayor Henrik Nybø and the bailiff Johs. Mathiesen. The first woman from the right is Dagny Nybø, the mayor's wife. It is also possible to get a glimpse of Anna Herland, former mayor.
Owner: Johs. Mathiesen. - Date: 1960. - Photographer: Ukjend.
Johs. Mathiesen.
1960.
Ukjend.

The opening ceremony is over, and guests and people from the community are inspecting the new road. Gravel is scarce, and the width of the road is for one car only.
Owner: Johs. Mathiesen. - Date: 1960. - Photographer: Ukjend.
Johs. Mathiesen.
1960.
Ukjend.

Hardbakke school, where the guests and people from the community celebrate the opening of the road with a meal hosted by the municipality. Sverre Takle, mayor in the period 1948-1955, was important in the struggle for the road.
Owner: Johs. Mathiesen. - Date: 1960. - Photographer: Ukjend.
Johs. Mathiesen.
1960.
Ukjend.

This picture is from 1925. An ordinary rowboat was used to transport passengers. Those going to Bergen had to be transported for half an hour in such a boat in order to get on to the steamship, which at the time stopped at Rognsvåg. Knut Kalgraff is rowing. The adult passengers are Karine Kalgraff, Kristine Kjellbu, and Lovise Kalgraff. The children are Ivar Kalgraff, Marta Kalgraff, and probably Aslaug Turvåg, foster daughter of Karine Kalgraff.
Owner: Judith Kalgraff. - Date: 1925. - Photographer: Anna Korsvoll.
Judith Kalgraff.
1925.
Anna Korsvoll.