Gulen church is a so-called longchurch made of wood, situated in the village of Eivindvik. With a seating capacity of 700, the church was consecrated by the dean Thomas Eriksen on 13 December, 1863. The church was designed by the architect Georg Andreas Bull. Gulen church is a "sokn" church for the Gulen "sokn" and is also the main church in the parish of Gulen. 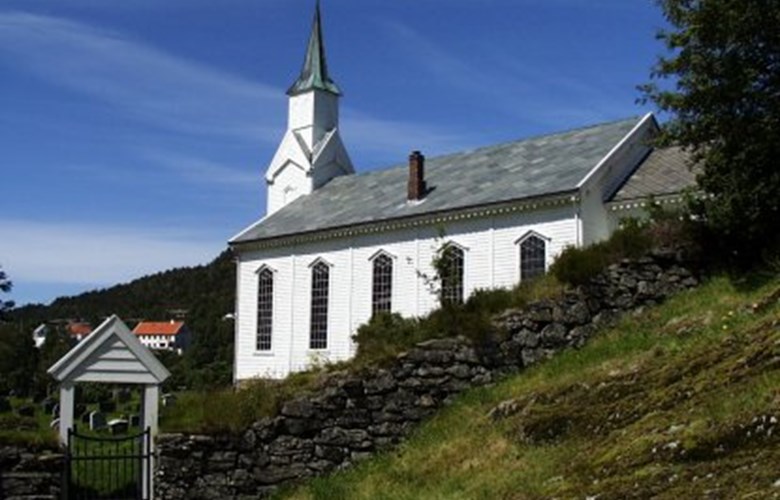 Gulen church is one of the oldest churches in the county. It is indeed a highly elegant church building.

Eivindvik is considered to be an ancient church site, perhaps one of the oldest in the country. The two stone crosses close to the church are more than a thousand years old. At this site the first Christians assembled before a church could be built. The first church was probably built on the same site as the old heathen place of worship at Eivindvik, as well as all other subsequent church buildings throughout all these years.

The present Gulen church was built when the parish was still called Eivindvig, which consequently gave its name to the church. The change of name to Gulen church took place in 1890. The church is situated on a hill in the centre of Eivindvik with a beautiful and commanding view of the Gulafjord.

In memory of the dean Dahl

The vicar Niels Griis Alstrup Dahl (1778-1852) was an ardent spokesman for building a new church, and he worked hard to make his plan come true. When he died in 1852, many people in the village thought it important to carry out what Dahl had suggested. Thus they could also honour Dahl's memory in a positive way. First the local council decided the size of the church, then they sent an application to build a church that could seat 700. In 1860, a royal decree gave the permission to build a church of that size. The local council then decided that the groundwork should be carried out in the form of duties - work teams of six men daily, two days for farmer and one day for crofter. The vicar was given the job of finding out where the cheapest building material could be obtained. The best offer is said to have come from Masfjorden, and, according to tradition, the timber was floated on the fjord to Eivindvik on a nice summer's day.

Seen from the outside, Gulen church is indeed a very impressive building, and this impression is even further strengthened when entering the church. The most conspicuous and characteristic architectural feature is the gallery along the nave walls all the way down to the chancel walls. The church interior is partly painted in black, which is a rather unusual colour, but in Gulen church we find the use of this colour many places, for example in the altar rail, the pulpit, as well as the gallery. About 1900, two dark-coloured and decorative stoves were installed on either side of the nave, and they are still there.

The chancel is spacious, 7.8 by 7.6 metres (about 26 by 25 feet) and is built with five of the sides of the symbolic octagon form. The flat ceiling follows the chancel form, spreading out from the central wooden cupola into eight areas. The ceiling of both chancel and nave are painted in a light blue colour. The nave itself measures 20 by 12.5 metres (66 by 41 feet). The length of the porch is 5 metres and the width 4.3 metres (about 16 by 15 feet). The porch constitutes the base of the turret which reaches up to the height of the protrusion of the roof.

The interior of the church was decorated, and on the gallery we can still find traces of a painted border in red and white which adorned the uppermost parts of all the walls. These walls were covered up by plyboard when the church was restored in connection with the 75th anniversary in 1938. At the same time, the front railing on the gallery was filled, and the organ was built in and turned 90 degrees.

The church had always had a vestry for the vicar on the north side, but it was only for the centenary / centennial in 1963 that a baptismal vestry was built on the south side of the chancel. At the same time, a cloakroom and toilet facilities were built. A few years before, electricity had been installed in the church. Up until about 1960, the organ was operated by means of a hand pump. Pumping the bellows was indeed hard work, especially at Christmas, Easter and other important religious occasions. Some local boys did this regularly, also whenever there was a funeral or wedding. They got 50 kroner annually for their efforts in the years after World War II.

Gulen Church is part of a rich tradition. Up to the year 1809, the parish of Eivindvik comprised all of Gulen including Brekke, and most of the Solund island communities, in addition to the "sokns" of Lavik and Bø on the northern side of the Sognefjord. The parish bordered to Vik (Kyrkjebø/Klævold) to the east and Askvoll and Ytre Holmedal (Fjaler) to the north. It is hard to ascertain whether the church in its very first years also functioned as a county church.

The stone font probably dates from about the year 1000. It has the form of a cube with a height of 60 centimetres (close to two feet). According to legend, the local people kicked the baptismal bowl out of the hands of the priests when they were to be baptised. Upon hearing this, king Olav got made a solid font of stone. The legend also says that king Olav saw to it that the font was carved out of the same stone as the two crosses. From about 1600 to 1905, the font was placed near the churchyard gate. A locum (substitute cleric) at Eivindvik took the matter into his own hands, as it were, and put the font into its rightful place inside the third church on that site. The baptismal bowl in silver dates from 1879, with the inscription "I baptise thee in the name of the Father, and of the Son, and of the Holy Ghost" The holy water ewer dates from 1963.

For Holy Communion services there are a chalice, a paten, a pyx (a vessel for the consecrated wafers), and a wine cruet from 1963, all in silver. Both the pyx and the wine cruet have inscriptions. The pulpit dates from 1863. In the chancel there are two stained-glass paintings from 1963. The motifs are "Jesus on the cross" with Maria and John at His side; and "the Ascension". In the nave there are two brass chandeliers from 1912, a gift from King Haakon VII and Queen Maud, a result of a "begging letter" from Johan Klokeid.

The organ - with 18 registers - was built in 1996 by Br. Torkildsen Orgelbyggeri AS in Levanger, Norway. There are two church bells; one dates from 1711, built by Thomas Lydersen in Bergen, and the other from 1821 with the inscription "Remoulded in Stockholm by Gerhardt Horner in the year 1821".

The turret has been repaired many times, the last time was in 1981 when the upper part got a new exterior wall, a new slate roof, as well as a new brass spire. Originally the church had entrances both on the south and north sides of the nave, but the southern entrance was eventually closed because of the harsh weather conditions.
Owner: Gulen kyrkjekontor. - Date: 2001. - Photographer: Ukjend.
Gulen kyrkjekontor.
2001.
Ukjend.

The altarpiece from 1872 was placed in the church the following year, ten years after the completion of the church building. For the first ten years there was probably only a simple cross. The altarpiece shows an oil painting on canvas 'Jesus in the garden of Gethsemane', painted by Christen Brun (1828-1905). The two silver candlesticks on the altar are from 1963 with the inscription 'To Gulen church at Eivindvik for its centenary / centennial in 1963 from former inhabitants of Gulen who have moved elsewhere'
Owner: Gulen kyrkjekontor. - Date: 2001. - Photographer: Ukjend.
Gulen kyrkjekontor.
2001.
Ukjend.