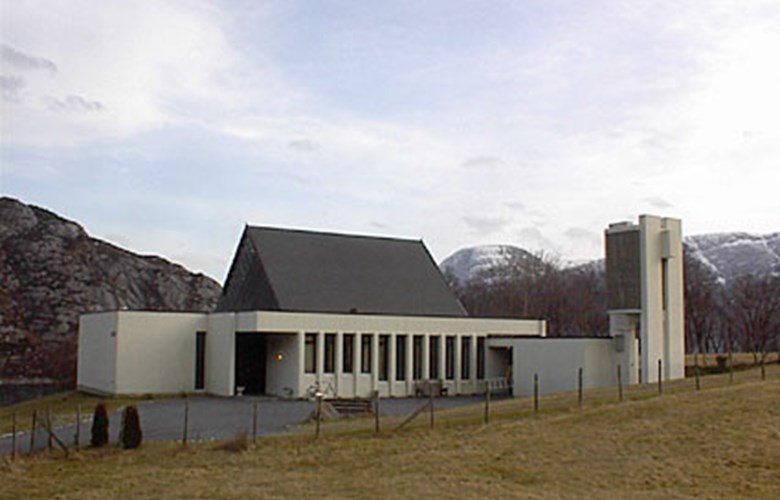 The modern local church community centre at Berle is somewhat smaller than originally planned. It has obvious similarities to the Nordsida church in Stryn.

The wish for a house of worship of their own

One of the most modern churches in the county is located on the main island of Bremangerlandet by the sea called Frøysjøen. It was built four years after a similar church was built at Nordsida in Stryn. In the village of Berlebygda people had worked almost as long as the people in the village of Blaksetbygda to get a church of their own. In the former case, however, it was not a discussion of location which slowed down the process, but rather the fact that other projects were given priority.

The unpredictable weather conditions on the sea of Frøysjøen make it easy to understand that people wanted to have their own church at Berle. For centuries they had gone to the "sokn" church at Rugsund, and had experienced their fair share of dramatic episodes on their way to church. To make matters worse, it took close to four hours by boat and car to get to the church and back. The school was the only house they could use for assemblies, but around 1900, more and more people agreed that it was time to start the process of getting their own church. Things improved a little when the village of Berle got their own graveyard in 1893, next door to the present church site. The small chapel by the graveyard was also a blessing, because people could congregate there before the coffins were lowered into the ground. Nevertheless, a church of their own was high on the list of the local population.

Around 1910, the Berle district applied to become a separate chapel district, but the Rugsund "sokn" council put off dealing with the application, and eventually turned it down. But the inhabitants on the eastern side of Bremangerlandet refused to give up. In 1911, they started raising money to build a church, and the idea of a separate church was kept warm through regular fund-raising activities.

People who had initiated the fund-raising activities realized by and by that the church would not likely be built in their lifetime. Many of these therefore gave their contributions in the form of testamentary donations. Finally, in 1963, things started moving in the right direction when a special committee was appointed to work for a more targeted approach in the church cause. Bishop Per Juvkam's visit to Berle was also an inspiration for their cause. Later on, he took the initiative to let the people of Berle use the same design for the church as the congregation at Kilsfjord in Sunnmøre had done for their church, a co-operation the village of Blaksetbygda later on joined in. The municipal council of Davik was also in favour of these plans.

There was cause for optimism in the local community until the extensive regulation of municipal borders took place in 1965, when the part of Davik municipality which included Berle was transferred to the municipality of Bremanger. In the new and bigger municipality other things proved to be more important than building a church at Berle. A case in point was the building of schools which demanded big investments. In 1975, the municipal council of Bremanger finally resolved to build the long-awaited chapel, but in order to cut costs, it was decided to remove the planned basement floor. But the people were happy because at long last they would get their own church. Bishop Per Juvkam was also a very happy man when he returned to Berle on 21 May, 1976 to lay the foundation stone for the chapel. The following year, on 3 July, 1977, his successor, bishop Thor With came to Berle, and the consecration of this modern church building was in fact the bishop's first in office. 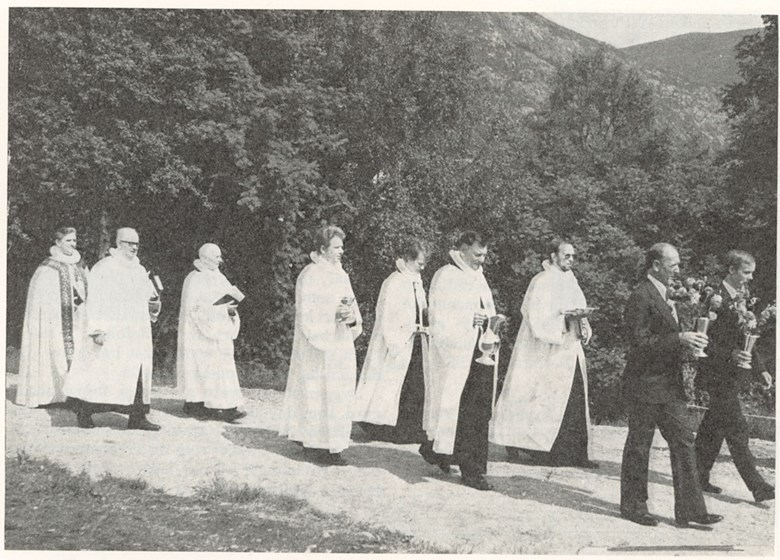 Berle church has obvious similarities to the Nordsida church, and the interior is designed in the same way. The chancel is separated from the nave by a simple, square altar rail. On the concrete, white side walls of the chancel light comes from narrow windows. The room is light, marked by the white concrete walls and the pine-panelled slanted ceiling. On the side of the main room there are partition walls to the smaller assembly room, but both rooms are used for the major church services. The small assembly room is normally used for various club activities, festive occasions, "church coffees", funerals, as well as meetings of the "sokn" council. The kitchen is also used as a baptismal vestry, whereas the vicar's vestry is located to the right of the chancel.
The extension includes a so-called "coffin room" and the church bell hangs freely in the square belfry.

The solid house is situated by the road though the village, but the church cannot be seen properly from the sea because of the copse of birch. The church site was a gift from a private person. It took all of 65 years from the start of the fund-raising activities until the cornerstone was laid, and during those years, the small congregation had raised about 200 000 kroner. In addition to money gifts, much of the work on the building had been carried out on a voluntary basis by the villagers. Today the Berle church is one of the churches with the highest attendance percentage in the county. The population of Berle is close to 140, and on average about 40 turn up for services.

The altarpiece dates from 1922 and is made by Ingjerd Pettersen Hagh and Kari Melvær Vadøy. It is made of wood and brass and the motif is "Peter's fishing" (Luke, 5;1-11).

The freestanding altar in wood is designed by Alf Apelseth. On the altar there are two silver candlesticks. The Holy Communion objects consist of a chalice, a dish, a pyx, and a wine cruet. The pulpit and the font are both made of wood, also designed by Alf Apelseth. Both the baptismal bowl and the holy water ewer are made of silver. The organ has six registers and is made by "Vestre Orgelfabrikk". All these objects date from 1977.

Before 1977, the church bell from 1932 was used at the graveyard. It was made by "Olsen Nauen Klokkestøperi AS", with the following inscription: "So teach us to number our days - Psalms 90;12".

The modern decor is formed in wood and brass. The motif in the altarpiece , 'Peter's fishing' , was a natural choice for the coastal population of Berle. The lectern is decorated with the tapestry 'Grapes', the font with 'Dove' and the pulpit with 'Grain'.
Owner: Kameleon tekstildesign. - Date: 2002. - Photographer: Eldrid Røyset, Førde.
Kameleon tekstildesign.
2002.
Eldrid Røyset, Førde.

The tapestry 'The ten virgins'. The motif is taken from the parable of Jesus of the ten virgins who are waiting to meet the bridegroom. The five wise ones are prepared and have oil in their lamps, while the five foolish ones are not prepared.
Owner: Kameleon tekstildesign. - Date: 2002. - Photographer: Eldrid Røyset, Førde.
Kameleon tekstildesign.
2002.
Eldrid Røyset, Førde.