Two years after the war 1940-1945, the 13-year-old boy Bjarne Peder Nesøy died after a fire accident. He had played with inflammable "sticks" which he and his brother had found at a German fortification. Bjarne Peder Nesøy lost his life as a consequence of the war, although it happened as late as in 1947. 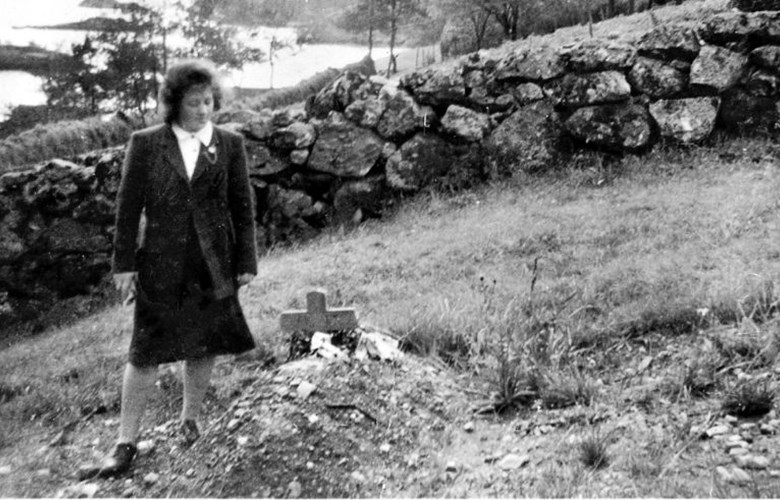 Bergitte Nesøy, married Pedersen, beside the grave of her brother a short time after his burial.

Not included in Våre falne (our fallen)

The four-volume Våre falne (our fallen) was published in the years 1949-1951. All those who died during the war are included, "as far as acts of war were the cause or a material, contributing cause of their death." Persons who died in accidents after the war are also included, for example if they accidentally triggered off mines.
Bjarne Peder Nesøy is not mentioned in Våre falne.

Bjarne Peder Nesøy was buried in the churchyard of Solund church at Hardbakke. A cross was first put on his grave. Later the family had a white marble stone erected. On the stone is carved: 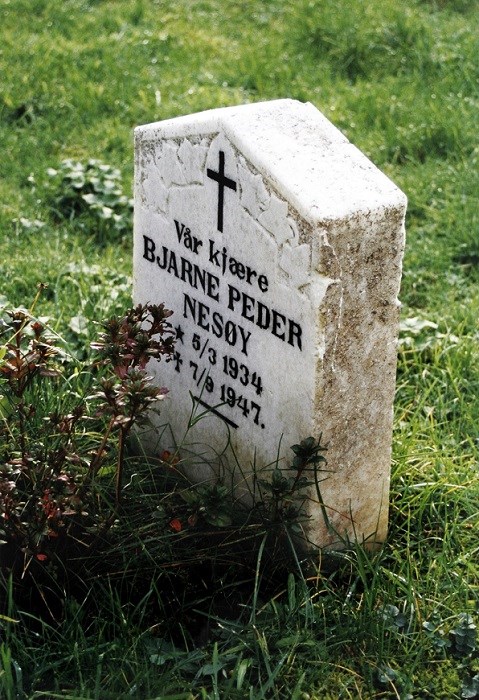 Ragnvald Glavær from Gulen and his family visited Nesøy in Solund. They went on a Sunday outing to Risneset in Gulen, where the Germans had fortifications. They travelled in Ragnvald Glavær's motor boat with a rowboat in tow. Among the remnants of the war the children found a bundle of sticks or tubes which they brought with them in the rowboat.

On their way back the children sat in the rowboat. They picked out stick after stick, lit them and threw them into the air. The sticks burned nicely but did not explode. It all went well as long as they were moving. When they came back to the boathouse at home, they lit another stick, but this time the stick fell into the boat and set fire to all those who were in the boat. Bjarne, who was wearing shorts only, was seriously burnt. He jumped in the water, yet after a time at the hospital in Bergen, his life could not be saved.

The other boys were not injured in this very sad incident two years after the war.

The sticks were apparently tubes filled with a kind of powder, used as fuses for explosives.