Førde church is a basilica church in wood located on the farm Skei in the centre of Førde. It has 600 seats and was consecrated on 1 October, 1885 by bishop Fredrik Waldemar Hvoslef. The architect Jacob Wilhelm Nordan designed the church. It is the parish church of Førde parish and main church of Førde "sokn" (sub-parish). 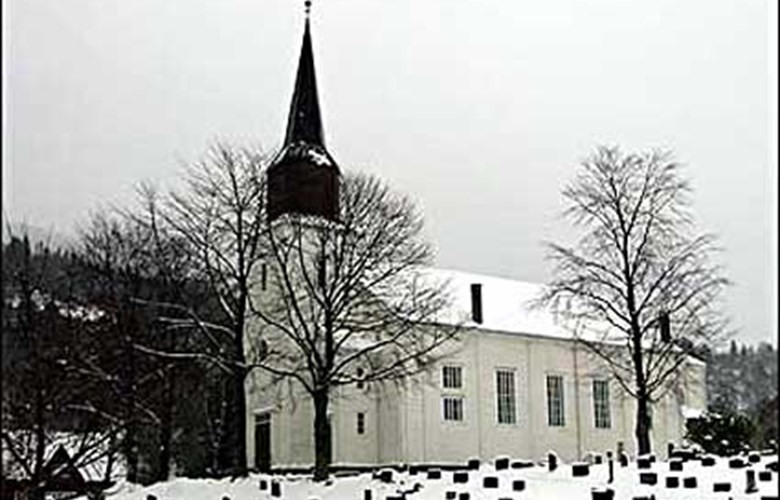 Førde church is a big and beautiful church in wood, and it appears as typical of the churches built at the end of the 19th century.

Førde church is one of the biggest in the county, nicely located on a hill at Skei, near the old bed of the river Jølstra up to 1780. The church today dates back to 1885, but in this very place there have been churches as far back as to the 11-1200s. The altarpiece in Førde church is one of the best known baroque altarpieces in the country. The church site at Skei was from time immemorial a natural centre in the community of Førde, but today it is somewhat hidden in the fast-growing town. This is the spot in the valley which is closest to the fjord and still avoids the danger of floods. The river is navigable up to Sjøahola and the old landed properties in the community, Førde and Skei, which the wealthy vicar Peder Finde bought from the king in the 17th century. He was the one who secured for the church the marvellous altarpiece from 1643.

During a flood in the spring of 1780, the river Jølstra broke a new course toward the fjord so that the curve near the church became a backwater. Some time later the Postal Road between Bergen and Trondheim was built. The road came down Halbrendslia to Hafstad and on to Jølster. The church was then no longer centrally located, even if the bridge Langebrua from the 1830s on helped tie the community together. Then Kyrkjevegen became the most important communication artery in the community, and there was no discussion about the church site in 1838, nor in 1885, when the new churches were built.

The church of 1885 is built in cogged joint timber and appears as a typical west country church from the last part of the 1800s. Vik church in Sogn from 1877 served as a model. Førde church is 38.7 metres long, the nave measuring 24.4 metres, and 15.5 metres wide. To the east there is a pentagonal chancel with vestries on each side. The porch to the west is a quadrangle 5.5 by 5.5 metres, and it has a base for a 30-metre-high steeple. The church has a large gallery, where an organ was installed when the church was new. The church was cold then, but this improved when electricity was installed in 1915. The experience of the church atmosphere became better still when the old altarpiece was returned to the church in 1925, after being stored in several places for 40 years.

But the architect Gerhard Fischer was not pleased with the new church. In 1913, he wrote in the yearbook of the Society for the Preservation of Norwegian Ancient Monuments about the church which, with its "boring slate roof, its hard lines and the dismal silhouette of the chancel makes a strangely hard and cold impression in the beautiful landscape. And the impression inside corresponds, regrettably, all too well with the exterior. It is difficult to imagine something more ice cold, naked, and less attractive in colours."

The church remained little changed until 1941-1951, when it was renovated and rebuilt. First the ceiling was made horizontal, then the interior walls were clad with pasteboard and wood panelling , and the tops of the windows were made horizontal and insulated. The steeple was also changed. The church was repainted, and new electric lighting was installed. When the renovation project was finished in 1951, Førde church had been changed considerably.

In 1962, flood-light was installed. In 1970, the vestries were rebuilt and running water installed. New plumbing installations came in 1975. The entrance for wheelchairs was built in 1983, and the porch was renovated in 1985. In 1995, the interior and the exterior were repainted. The walls of the nave are today a light yellow, with light brown columns, white mouldings, and grey-green seats. The ceiling is white. The chancel has light grey walls and a blue ceiling with yellow stars. The floor in nave and chancel is unpainted wood.

The altarpiece from 1643 is regarded as one of the most valuable baroque altarpieces in the country. It was a gift from Peder Jørgensson Finde (1610-1691), vicar of Førde from 1637, and Barbara Nitter. In a way it is the memorial of the family Finde, yet made "for the Glory of God and to the Beautification of His House". The around four-metre-high altarpiece expresses Lutheran orthodoxy in the imagery of the Baroque and relates the fundamental salvation events in accordance with the Lutheran interpretation based on the contrasts: law - gospel, sin - grace, and death - life.

The altar was extended in 1998, but the antependium dates back to the rebuilding in 1950. It is in red wool, with an embroidered Christ monogram, IHS (Iesus Hominum Salvator), in a garland. On the altar are two candlesticks in brass, probably from 1951. The christening candlestick from 1885 was before this used on the altar.
The altar set consists of a chalice, a paten, a pyx, and a wine flagon from 1950, all in silver. The wooden font, from 1951, is octagonal. The baptismal bowl and the holy water ewer are both in silver, from 1950.

The picture textile "Kirkeåret (the church year)" is from 1993, and hangs on the long walls of the nave as a calendar of the entire church year. It starts with Advent forward on the south-east wall and ends with the Sunday of Judgment on the opposite side in the front. The textile was made by Maren Erland from Førde. It was used as an altarpiece 1993-1998, while the old altarpiece was being renovated.

In the period 1941-1951 the church was renovated and rebuilt. First a flat ceiling was built, then the interior walls were clad with pasteboard and wood panelling, and the windows were made flat at the top and insulated. The unique altarpiece in the background.
Owner: Førde kyrkjekontor. - Date: 2001. - Photographer: Jon Baxendale.
Førde kyrkjekontor.
2001.
Jon Baxendale.

Epitafium from 1681, painted by Caspar Helvig in 1680-81. It portrays Peder Findmand, shopkeeper, with his two wives, Karen Dyrhus and Giertrud Finde, and their children. The painting is very rich in detail and well done, in particular the costumes.
Owner: Førde kyrkjekontor. - Date: 2001. - Photographer: Jon Baxendale.
Førde kyrkjekontor.
2001.
Jon Baxendale.

The pulpit from 1672, made by an unknown artist, is adapted to the altarpiece and earlier probably had a panelled canopy. It was installed in this church in 1942. On the front of the pulpit there are carved sculptures of Christ in the middle, and apostles and evangelists, each with a book. The figures are Matthew, Jacob the younger, Mark, Peter, Christ the Saviour, Paul, Luke, Simon, and John.
Owner: Førde kyrkjekontor. - Date: 2001. - Photographer: Jon Baxendale.
Førde kyrkjekontor.
2001.
Jon Baxendale.