Storsundet - important base for resistance activity during the war

Storsundet in Solund became an important base and a hub for resistance activity in the Sogn district during the war. The Shetland traffic used the place for storage of weapons and other war materials, which with time was forwarded east along the Sognefjord. The dump in Storsundet was never detected by the Germans. 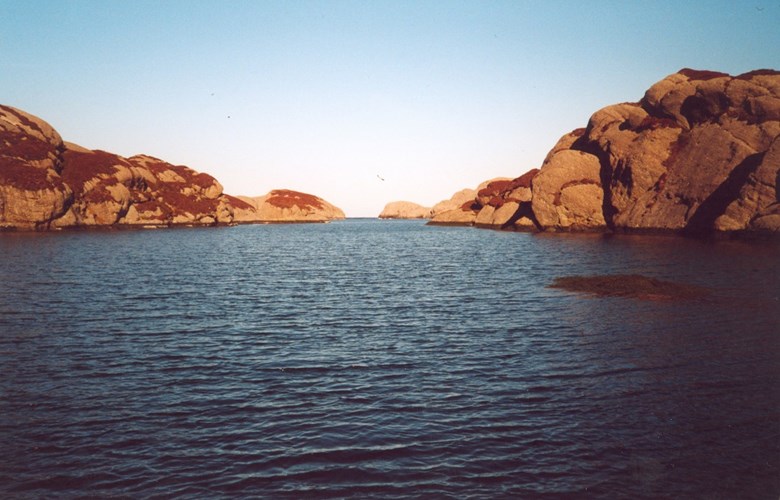 Storsundet seen toward the north-west and the open ocean. The narrow entrance was deep enough for fishing vessels. High seas easily close the opening, making it impossible to get through. The terrain is very rugged and well suited for clandestine activities.

An unfriendly hole in the black rock.

Like a defiant fist against the Straumsfjord, Storenova builds up the current surge and the sea waves at Storsundet. It could not be the entrance that gave the place its name. The opening between the steep rocks is some 10-12 metres wide, but inside there is a surprisingly wide and long bay, which even splits in two. The narrow entrance further south is only for rowboats in dead calm at high tide. From the outside the opening is difficult to see, and gives in addition an unfriendly impression. Abandoned and isolated, but there was hardly a better place to land and hide war materials and people in all of western Norway.

The place was also sheltered from the three German signal stations in Solund, until February 1944, when the Germans established themselves at the Utvær lighthouse. But exactly one year later, the British bombed the lighthouse. That probably reduced the importance of this tower as a look-out post for the remainder of the war.
The area was owned by the Hjønnevåg people. And they had built a small fishing cottage there, where they could spend the night and save a rowboat trip when they looked after their salmon seines there in the summer. Early in the war, several of the Hjønnevåg men made very daring transports of agents, radio transmitters, and runaways, and the Hjønnevåg community became an active resistance base.

The first arms shipment arrived there as early as in January 1943. It was not under Milorg (Norwegian resistance organization) control, therefore the receiver could not find it! But Johan L. Hjønnevåg was soon able to give the solution: Storsundet.
Innermost in the bay of Storsundet the sub-chaser Hitracould dock onto a rock as easily as onto a quay. In a depression a short way up, arms and equipment were stored and covered with tarpaulin, heather, and turf. The terrain is quite rugged, so the dump was difficult to detect. It happened that a shipment was divided and hidden in two places, which happened to the first shipment. The Hjønnevåg men joined Milorg. 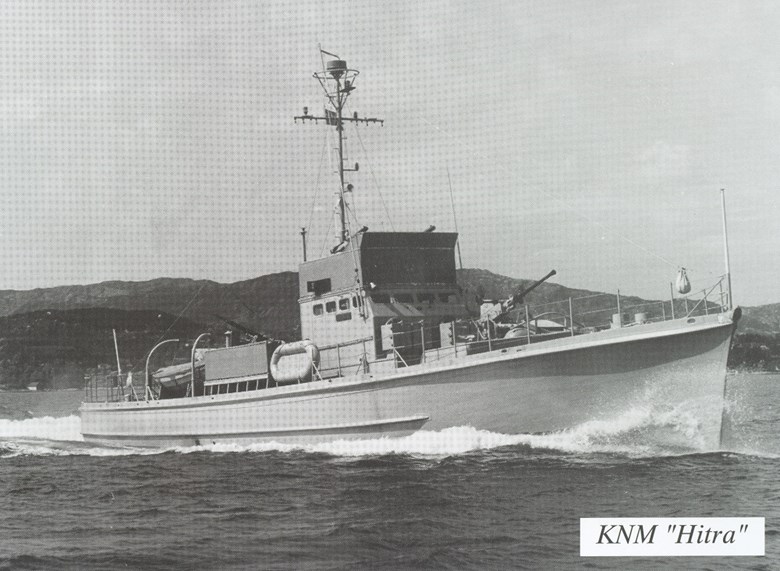 The fishing cottage at Storsundet and a cowshed some 2-300 metres from the residential houses at Hjønnevåg became temporary quarters for active resistance workers. In the cowshed there were at one time 13-14 men. Food was needed, and people even had to use butcher knives on their own animals to supply it. The shopkeepers, first of all Oskar Eide at Kolgrov, provided the rest.
The bailiff Johannes Mathiesen as well as the vicar Hjalmar Storeide were suspended from their offices in 1943. They were both zealous resistance movement members and organized trips locally and far into the Sognefjord. Both had motor boats and helped people who were wanted by the Gestapo find cover or escape from the country. 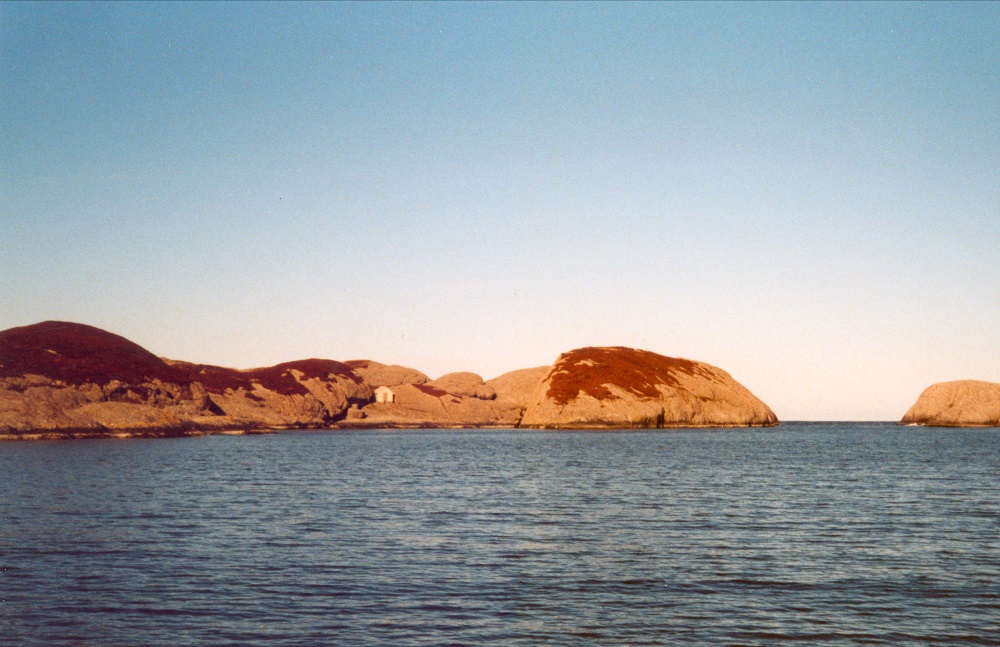 Seine over the hatch

From the spring of 1945 onwards, when it was decided to improve the arms capabilities of the home forces, the weapons traffic was better organized. The leader of Milorg as well as people from the Linge Company visited and praised Storsundet. Mathiesen and Storeide warned when shipments were under way and arranged the further transport. The Hjønnevåg men received and delivered. People from Færøy took responsibility for the transport of the materials into the Sognefjord. Others took part also in the transport. Over the hatch they put seines. Everything took place in deep secrecy. Several undertook long trips into the Sognefjord. On all trips, there was a stop at Kvamsøy for further clearance. Considering the dimensions of the activity from Storsundet, it is a wonder that nothing was disclosed.

The brothers Petter and Einar Færøy brought the first arms shipment from Storsundet to the home forces in Sogn. They used their fishing vessel "Per". On this mission Ragnar Ulstein, Nils Knagenhjelm, Edmund Ness, and Aaberge went along. They had been in Solund and discussed unloading places for equipment for the home forces. They had now been under cover near Storsundet, having had conversations with the suspended bailiff Mathiesen and the vicar Storeide.
The "Per" also transported the third shipment east. 17-year-old Reidar Engevik was also onboard, to join the home forces. This was a far more nerve-racking experience, but they made it safely. The picture shows a much more relaxed situation: the "Per" is transporting a wedding party in 1945.
Owner: Hans H. Steinsund. - Date: 1945. - Photographer: Ukjend.
Hans H. Steinsund.
1945.
Ukjend.

The second shipment of arms to Sogn was on the Enstad fishing vessel "Trio". This was the biggest of the shipments. Nils Enstad, Petter Færøy, and young Reidar Engevik were onboard. On their way east, Nils dropped by the German signal station at Tungodden and was given a fresh stamp in his boat passport! There was no quay, so the fishing vessel waited in the sea with the engine at dead slow while Nils rowed ashore. Both the "Per" and the "Trio" had seines over the hatch to avoid suspicion. Both boats had in addition explosives in the hold, with the ignition control in the wheelhouse. Under no circumstances would the arms get into German hands.
The picture shows the fishing vessel after she was extended and had a new wheelhouse. The family Enstad moved to Øygarden in 1961.
Owner: Hans H: Steinsund. - Date: Kring 1965. - Photographer: Ukjend.
Hans H: Steinsund.
Kring 1965.
Ukjend.
resources:
Krigsår i kystbygder. Frå Bergen til Solund. Nordhordland Forlag 1995.
Steinsøy, Alf:Krigshendingar i havkanten. Solund 1987.
Ulstein, Ragnar: Englandsfarten. Bind 2. Samlaget. Oslo 1967.
Irvine, James W.: Men bølgene er jo fri. Shetland/Noreg forbindelsene 1940 - 1945.
Arnfinn Haga. Fleire av bøkene hans har Solund-stoff som inkluderer Shetlandsfart.