The waterfalls in the valley of Nærøydalen

The impressive waterfalls in the innermost part of Nærøydalen - Sivlefossen and Stalheimsfossen are famous tourist attractions. They are both examples of rivers that formerly ran towards Voss. The reason for this is that the river of Nærøydalselvi in the course of hundreds of thousand years has eroded the valley and thus changed the fall direction of a number of tributaries now running towards Sogn. 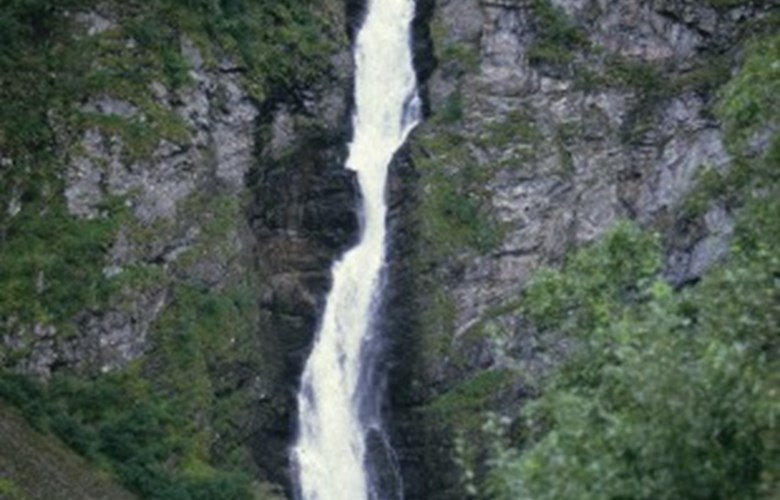 The waterfall of Stalheimsfossen has a drop in elevation of 126 metres.

Stalheimsfossen
Stalheimsfossen is one of the two waterfalls with a free fall at Stalheimskleiva. In the deep gully the waterfall drops 126 metres in elevation. The best view of the waterfall is from the old road at Stalheimskleiva. Before this road was built in the period between 1844 and 1849, the "royal road" along this waterfall was the main artery to Stalheim. In connection with the municipality of Voss' action plan for outdoor activities, the "royal road" at Stalheimsfossen has been upgraded so even people in wheelchairs can use it. The walk is an attractive activity for young and old who want to experience an impressive river and waterfall. The walk to the waterfall takes about a quarter of an hour.

Sivlefossen
Sivlefossen can be easily seen from the third hairpin curve from the bottom of Stalheimskleiva. This waterfall has a drop in elevation of 240 metres. The gully of the waterfall underlines the narrow profile and marked end of the valley.

Sjur Helgeland has revealed how the tune came about: "Many fiddlers were assembled at Lærdalsøyri and had been playing for several days. We played day and night and I was desperately short of sleep. This could not go on so I took my belongings, walked to the quay and took the first boat and headed home for Gudvangen. Then I walked up the valley on a fine day filled with springtime activities. When I had climbed halfway up the steep road called Stalheimskleivi I felt a sudden need to sleep. I left the road and walked into the fine birch forest and by the waterfall of Sivlefossen I lay down and slept for a long while. When I woke up, I found my fiddle and the tune came to me just like that".

Brynhild Vikøren (1905-1959) with an unknown woman photographed by the Sivlefossen at Stalheim. Brynhild may have worked at Stalheim Hotel. Later she worked at the Holbergstuen restaurant in Bergen. She had one son, Ottar Hartmann. Brynhild drowned in the river at Fosse in Vik when she was home on holiday.
Owner: Billedsamling, Universitetet i Bergen - Date: 1930 - Photographer: Knut Knudsen
Billedsamling, Universitetet i Bergen
1930
Knut Knudsen