The main road at Bremangerlandet

A continuous road connection along the Bremangerlandet with ferry across to Måløy came in 1949. In 1977, the island of Frøya was connected to the highway (RV) 616, and the ferry connection Smørhamn-Kjelkenes was established. 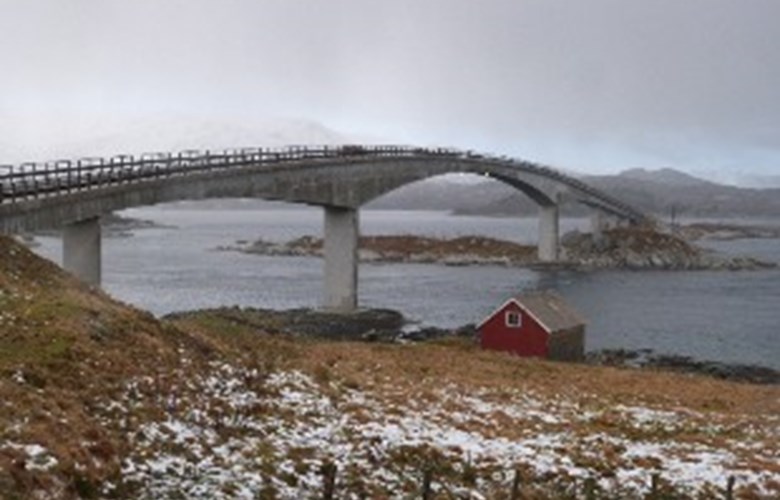 The first road connection on the island of Frøya

The first road to be built by public means in the old municipality of Bremanger was the road Steinset-Kalvåg-Frøynes on the island of Frøya in the period between 1907 and 1912. At that time, Kalvåg was the administrative centre in the municipality, and one of the biggest fishing villages in the county. A large number of fishing vessels were frequently gathered there. The road was built by means from the so-called "spring herring fund". It was the herring fishermen who demanded a road so they could get to the herring fishing grounds at Frøyskjera overland, when bad weather prevented them from getting there by boat.

In the years 1920-1949 a number of rural roads were built at Bremangerlandet. Some of the roads were even built on a voluntary basis. The municipality allocated some means in advance, but most of the means came from relief work funds and means earmarked for roads in the coastal villages. The allocations were small, and, consequently, the road building did not make much progress. In 1927, the road between Dalsbotn and Kanalen was completed. In 1931, the road Kanalen-Førde-Fossane was completed.

A main western connection between Florø and Måløy was projected for the distance Florø-Årebrotsvåg-Sørbotn-Smørhamn-Rydland-Førde-Dalsbotn-Oldeide-Måløy. In May 1935, the work was started on Dalsbotn-Oldeide, and in 1939, the section between Smørhamn and Rydland was started. This road construction was taken out of the road plan of 1921, but reintroduced later on because it was ideal for relief work. In addition, demands were put forward for a better connection to Måløy. Originally this road was planned as a rural road, but after a number of applications from the municipality of Bremanger, the road was built as a main road.

The road to Frøya

In the 1970s, about 1800 people lived at Bremangerlandet, and on the island of Frøya about 650. In January 1972, the construction of two bridges at Oldersundet and Hamrøy was started to link Frøya to the highway. In addition, a ferry quay was built at Smørhamn. The Minister of Transport and Communications, Ragnar Christiansen, cut the ribbon across the Oldersundet Bridge on 22 August 1977. The whole construction work cost NOK 20 million, and the road meant a new and vital incentive for the district.