Stavang church is a longchurch in brick at Stavang in the municipality of Flora. The church, with a seating capacity of 312, was consecrated on 16 June, 1957, by the bishop Ragnvald Indrebø. The architect Ole Halvorsen from Bergen made the designs. Stavang church is a "sokn" church for the Bru "sokn" in the parish of Kinn. 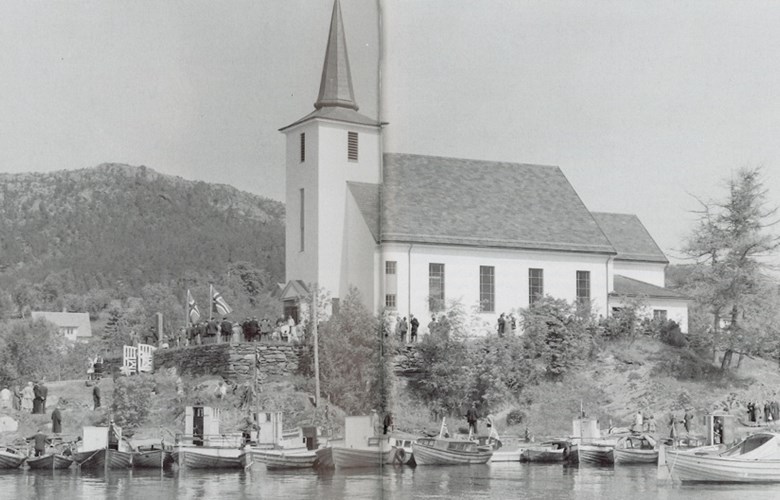 For the consecration ceremony of the church on 16 June, 1957, 90 boats anchored up in the harbour, and 1500 persons wanted to get inside the church, but most of them had to listen to the sermon through outside loudspeakers.

Both the church and the church site are relatively new, but the church in Bru ¿sokn" has traditions dating back to the Middle Ages. From the Middle Ages until 1872, the ¿sokn" church was located on the island of Svanøy, but it was in a bad condition and needed repair. When the issue was brought up in the 1860s to split up the Kinn parish and buy a vicarage at Stavang, the ¿sokn" council decided to build both a new church and a vicarage for Bru on the mainland, and tear down the old church at Svanøy.

The new church site was on a small hill directly up from the quay at Stavang. There might have been a church at Stavang in the 1400s, but we do not know whether this church was located on the same site as the present one. Stavang and Bru were then two different ¿sokns". The Stavang church must have been out of use at that time.

The wooden church from 1873 did not last very long. On the day before Christmas Eve, 1951, it burned down to the ground. This was the third major church fire in the county of Sogn og Fjordane in a decade or so. In 1940, fire struck Øn church in Hyllestad (built 1870), in 1945, Nord-Vågsøy church at Raudeberg burned down (built 1854), and, then the Stavang church after 78 years of service. It took as much as six years before a new church was completed. Nevertheless, the Stavang church was the first church to be built in the county after World War II. In the meantime, the school building was used for church functions. 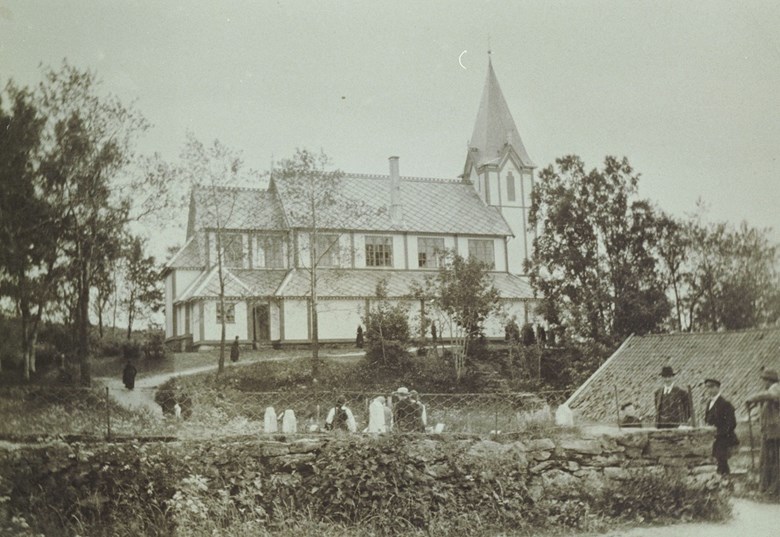 The work with building a new church

It took only five days after the fire before the ¿sokn" council at a special meeting appointed a building committee, chaired by perpetual curate Einar Tuvin. New church designs were produced in 1952-1953, and Tuvin kept the congregation informed of the church issue through a number of articles in the Kinn congregational magazine. However, years passed without any significant progress, more due to bureaucratic rather than practical obstacles. A glimmer of hope came in an article from 1955: "The people of Stavang were all happy when we finally came to the point that the work on the church building could be started and be completed fairly quickly. Nobody had nourished any hope that it would be possible to do this so quickly. On 19 September, the first bricks were laid on the foundation wall, and in a matter of two weeks, the brick walls had reached such a height that the timber work could be started¿". Still, another two years were to pass before the church could be consecrated.

The new Stavang church is one of the tree brick churches in this county, the two others being Svelgen chapel and Farnes church. The exterior and interior walls are dressed and whitewashed. Towards the north an addition has been built containing a meeting room for the congregation. The church has four big, high windows on either side of the nave, whereas the altarpiece is a colourful stained-glass window on the back wall of the chancel. The old church on the island of Svanøy also had some fine stained-glass paintings, so this type of decoration has been a tradition in the old Bru ¿sokn" for a long time. The richly coloured mosaic on the pulpit and the font goes well with the rest of the interior. 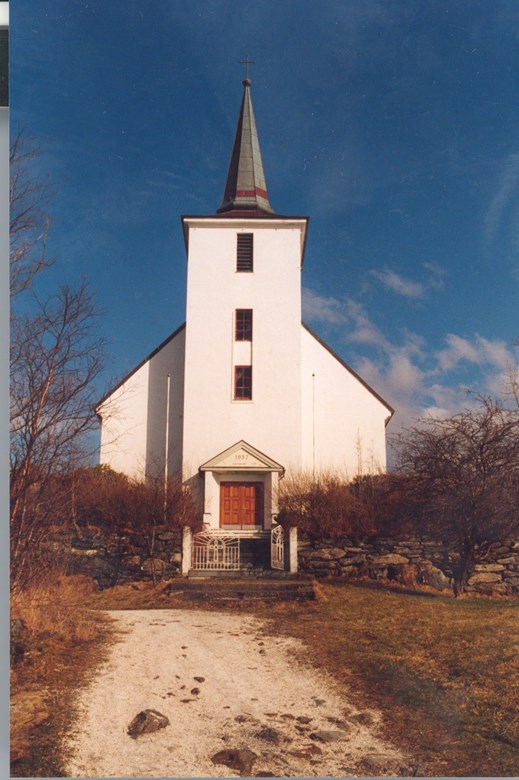 There are two vestries, one for the vicar and the other for children to be baptized. The pulpit steps lead directly from the vestry, so that the congregation can get a full view of the chancel. The lower part of the side walls has wainscotting (wooden panelling) up to a height of about 1.5 metres (about five feet)from the floor. The organ is placed inside the turret, and the organist sits on the south side of the gallery with a window behind him. In this way the organist has good light from behind, and a good view of the church room.
The total building costs in 1957 amounted to 360 000 kroner, plus 40 000 kroner for the organ. For the consecration ceremony, 90 boats anchored up in the harbour, and 1500 people wanted to get inside the church, but most of them obviously had to make do with listening to the sermon through loudspeakers outside.

The altarpiece from 1957 is a colourful stained-glass painting on the eastern wall, made by Egill Rognaldsen. The motif is Christ¿s Ascenscion with Christ lifting his hands to bless the 12 Apostles. There are stigmas on his hands and feet. 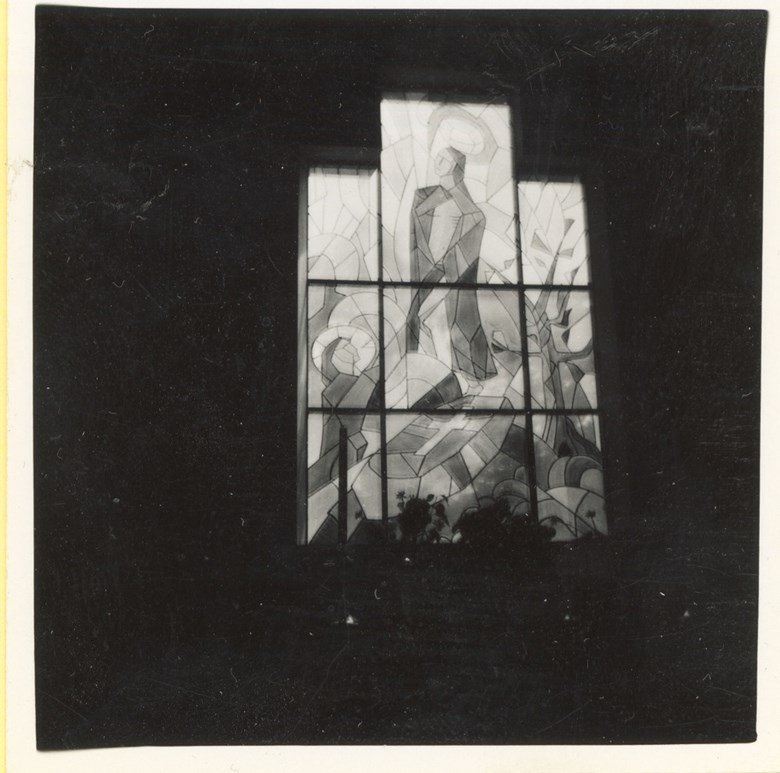 On the altar there are two silver candlesticks from 1957. The Holy Communion objects consist of a chalice and a dish from 1873 and an undated pyx. The dish has the inscription: ¿From the vicar", whereas the pyx is inscribed: "Fach Gedding B Mechlenburg". Both the pulpit and the font are made of wood with inlaid mosaic by Ellen Hernæs, both from 1957. The mosaic on the pulpit depicts the Virgin Mary with the Infant Jesus, and also the Easter scenes. The motifs on the font are ¿The victorious Christ", the dove which is a symbol of The Holy Spirit, and a woman holding forth her child. The baptismal bowl and the holy water ewer date from 1961.

The organ from 1957 has five registers. There are two church bells. One dates from 1952, made by ¿Olsen Nauen Klokkestøperi AS" in Tønsberg, Norway, with the inscription: "When I call for a church meeting, I call peace to the dead, I shall always be the interpreter of the Lord, when He wants to assemble his people". The other bell also dates from 1952, made by Olsen Nauen, and has the following inscription: ¿Land, land, land, hearken to the words of the Lord!"

An altarpiece from 1899 is placed in the meeting room for the congregation and is a canvas painting by Joh. Christensen, after H. Hofmann. The motif is Christ¿s Ressurrection. The painting was used as an altarpiece in the former church at Stavang, and was saved in the 1951 fire.