Selje church is a wooden longchurch located north of the Seljesanden beach in the municipality of Selje. The church, with a seating capacity of 500, was consecrated on 13 May, 1866, by the bishop Peder Hersleb Graah Birkeland. The architect Frederik Hannibal Stockfleth made the designs. Selje church is a ¿sokn" church and also main church in Selje parish. 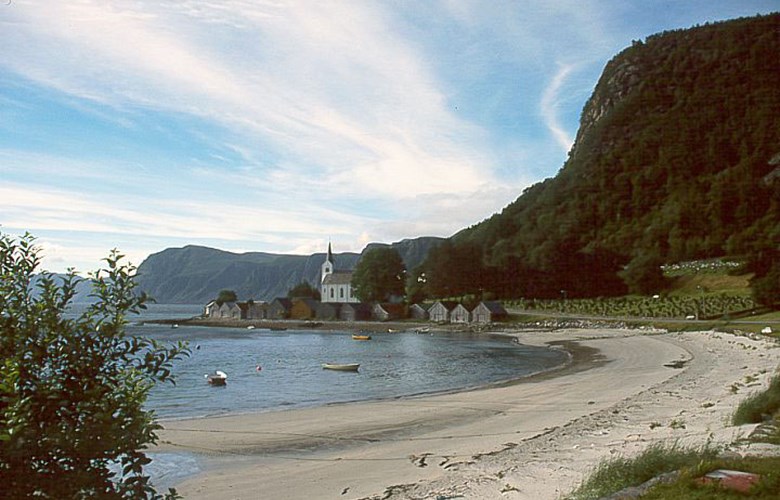 Few churches can match the location and setting of Selje church.

The vicar¿s wife had a say in the localization issue

Selje got one of the first churches in Norway after Olav Tryggvason turned the island of Selja into a holy place of worship in 996. The church he got built under the overhanging rock at Selja was also the first ¿sokn" church in Selje. Later on, the "sokn" church was located at Bø on the eastern side of the island before it was moved to the mainland in 1654. According to legend, it was the vicar¿s wife Maren Søffrensdatter who saw to it that the church was erected close to the shoreline north of the Seljesanden beach, and not by the vicarage as her husband, Jakob Studt, wanted.

When the Bø church was torn down, the building material was floated across the sound to Nabbetangen close to the vicarage. The intention was to raise the church at Hagevollen, not far from the vicarage, but Mrs Maren did not like the thought of having the ¿ghosts" so close to their residence. During the night she asked the servant to sneak off to loosen the ropes on the timber raft. There was a southerly wind, and the float drifted across the bay and landed just north of Seljesanden. When people the next morning woke up and saw what had happened, they took this as a sign that this is where the church should be built, and this was done. 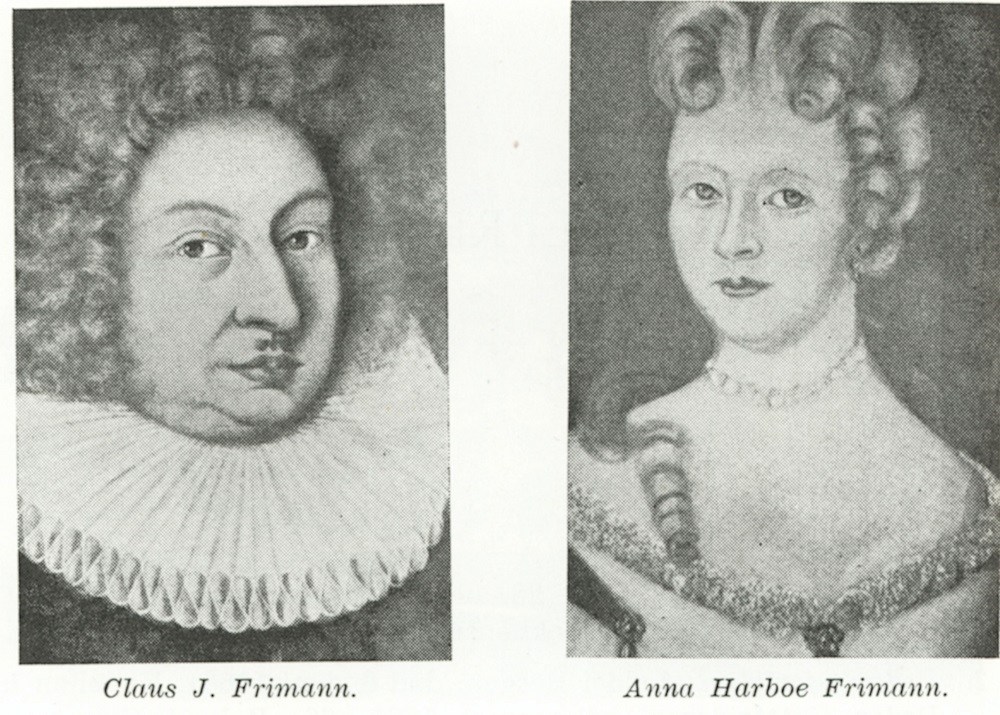 It was the local people of Selje who had been working to move the church, in spite of the fact that it was in a good condition. Perhaps there is some truth in another legend, which has it that the reason for the move was that a big rowboat full of church goers had disappeared. The landing conditions at Bø were also difficult.

The present Selje church was built in 1866, because the old church proved too small. According to a law from 1851, churches should have enough seats for 3/10 of the population in the ¿sokns". Churches that could not comply with this law, would either have to be extended, or new churches would have to be built. Many old churches which had seen neglect and lack of maintenance for years, did not ¿survive" the 1851 law.

Wilhelm Frimann Koren, vicar at Selje from 1826 to 1875 and dean of Nordfjord, enthusiastically went in for building a new church. He soon found out that the old church had a seating capacity of 200, standing room for 40 and additional 40 seats at the back of the church, and thus was hardly adequate for a population of 2168 in the ¿sokn". He wrote to the diocese board of directors, saying that the church was frequently very crowded, and many people could not get inside the church.

The old church had been privately owned since 1724, and maintenance was not given any priority. After long negotiations with the church owners, an agreement was reached in 1860 that the municipality would take over the old church which would then be moved to a new church site at Leikanger, and at the same time build a new church at Selje.

The construction work was started in the winter of 1865 on a site close to the old church, and in spring, 1866, it was completed. The last service in the old church was officiated on 22 April, 1866, and three weeks later, the new church was consecrated. The master builder Rasmus Sætre from Stryn received 6150 "speciedaler" for the work. Many of the workers also came from the inner part of Nordfjord.

With a seating capacity of 600, Selje church was one of the biggest rural churches in the Bergen diocese when it was new. Nevertheless, there were people who had to stay outside the church during the consecration ceremony. At that time, the municipality of Selje was one of the most populous in the county. In connection with the centennial restoration work, new pews were installed, which meant that the seating capacity was reduced.

Selje church is spacious and stately with a steeple above the porch. The nave measures 34 by 14 metres and has a 7.2-metre-high ceiling. The chancel is narrower with five sides of the octagonal form. On the northern side of the chancel there is a vestry with a separate entrance. The many, big pointed-arch windows provide much light in the church room. In the chancel there are five windows, two of which are stained-glass windows. The south wall of the nave has five windows and the north wall four. The central window on the north wall has been replaced by another entrance (in addition to the main entrance through the porch). There are vestries on either side of the chancel. The church has a gallery, where the first organ in Nordfjord was installed in 1890. The walls are of wooden colour, whereas the columns and beams are painted in a pale grey colour. The ceiling is painted white, whereas the pews are painted in two shades of blue.

Throughout the years, the church has been regularly painted and maintained, but without any significant architectural changes. Only in 1954, was electric lighting and heating installed. The churchyard has been repaired many times; the latest change took place in 1995 when a number of old graves were removed, and a new churchyard wall was built.

On the altar there are four candlesticks, two in silver plate from 1952, and two in brass from 1966. The Holy Communion set consists of a chalice, a paten from 1866, a pyx and a wine flagon from 1972. The pulpit and the font date from 1866. The baptismal bowl probably dates from 1866 as well, whereas the holy water ewer dates from 1966. 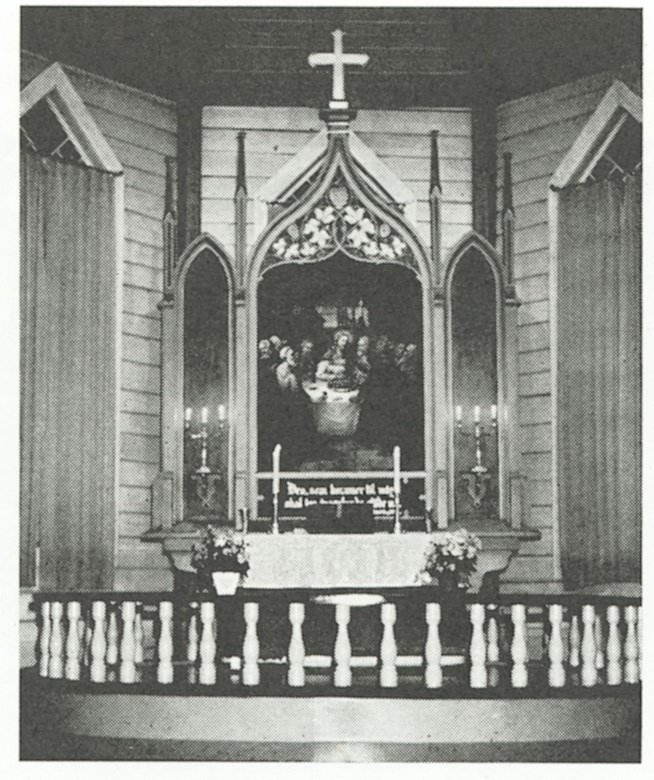 There are six portrait paintings in all. Three of these - probably painted by H. Sager - date from the 18th century and came to the church in 1845. One of these portrays the vicar Claus Johansson Frimann (1666-1715). The second is a portrait of his wife (1673-1769). The third painting shows the vicar Peder Harboe Frimann (1713-1759), son of Claus and Anne Frimann, vicar at Selje from 1745 to 1759, and father of the ¿vicar poet" Claus Frimann. The paintings hang in the stairway up to the gallery.

Two portrait paintings date from 1878, showing the vicar Wilhelm Frimann Koren and his wife Alette Boyesen, both painted for their golden wedding in 1878. The last painting portrays the vicar Koren, painted by Wilhelm Kvalheim in 1927.

The stained-glass paintings in the chancel date from 1990, and are made by Hilmar and Svein Sørensen. The procession cross from 1966 is made in Ireland, and is a gift from the congregations in Bergen in connection with the millennium celebrations at Selje.
The church bell dates from 1866, and is a recast bell made by ¿Laxevaags Værk". It has the inscription: "Glory to God alone".