From the 1890s until around 1920, the old municipality of Fjaler was the most industrialized of the municipalities in the county of Sogn og Fjordane. The largest enterprises before 1900 were the two brickyards. Helle Teglverk was started up in 1895, and Vårdal Teglverk in 1897. In 1905, 52 persons were employed at the two yards. In the early 1960s, Vårdal Teglverk was bought by Helle Teglverk, which was in operation until 1978. 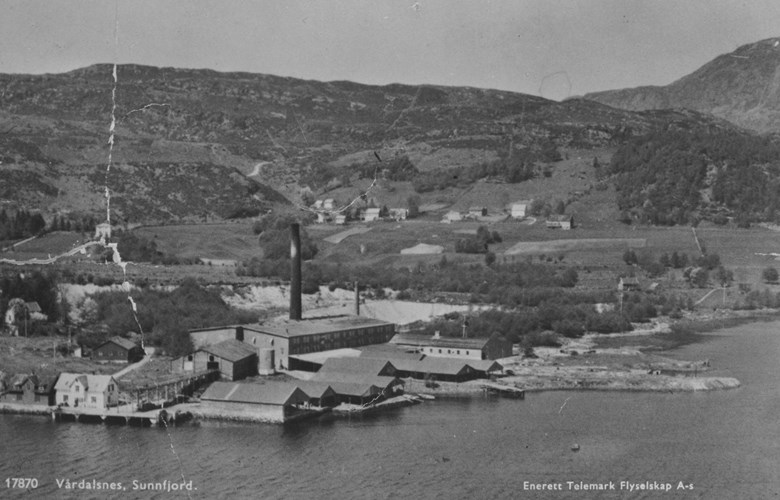 Vårdal Teglverk was situated at Vårdalsneset on the Dalsfjord. It was built in 1898, and it produced brick and tile. The clay was taken from a deposit behind the factory building.

Vårdal Teglverk was established in 1897, with the mayor of the Fjaler municipality, David Bakke, as an enthusiastic advocate. From 1902, the brickyard was managed by Jørgen Helgerud from Øvre Eiker. He had a background as manager of Sandefjord Teglverk (brick and tile works), and he was a master brick maker.

One reason why this enterprise did better financially than the works at Helle, could be that a sales office was established in Bergen quite early. Bergen was its main market, and it was important to have good contacts among the master bricklayers in the town. They made the decisions on where to buy the brick.

As at Helle, the clay at Vårdal was not of the highest quality, but it was good enough to produce burned brick. An unfortunate decision was made, however, when the furnace was planned, with an interior profile too long. The historian Hans Zakariassen has pointed out that the result was disastrous, with great quantities of stone burnt a light colour, which was of little use in the coastal districts.

Generally it was during periods with a demand for brick that production went on all year non-stop. During the winter season, building activity slowed down. Low temperatures also made it difficult to dig clay without frost clods. So production was smoothest in the summer months. In the 1950s both brickyards were short of manpower. They were therefore modernised, but this did not lead to better stone quality.

The brickyards in the Dalsfjord area provided much-needed jobs in the small communities, 35-40 jobs at each. Many combined work there with smallholdings. During recessions, when the storage rooms were full, it was good to have many strings to one's bow. After the war, the works were modernised, and in the 1950s, 65-70 men were employed at the two brickyards.

In the 1920s, the demand for brick was weak, and lay-offs were frequent. Several were unemployed for periods. Yet the organised labour movement came late to the Dalsfjord area, where most of the workers had their backgrounds on smallholdings, and often had smallholdings of their own. Only in the 1930s, the Vårdal Arbeidarforeining (trade union) was founded.

During the 1960s, operations at Vårdal Teglverk were gradually reduced, and was closed down in 1971. The building suffered fires and was later torn down.

The clay has come into the production facility. Here the clay will be poured into a kneading machine, worked up, and then transported on a conveyor belt into the press. The clay is then cut, and the stone dried and burned.
Owner: Fylkesarkivet i Sogn og Fjordane/Kjell Eikemo. - Date: 1950-1955. - Photographer: Ukjend.
Fylkesarkivet i Sogn og Fjordane/Kjell Eikemo.
1950-1955.
Ukjend.

Picture of workers taken in the early 1920s. Many of the workers came a long way, and some had to cross the fjord. Several had smallholdings to run in addition to the job at the brickyard, so the days were long. The day at the brickyard began at 6 o'clock and lasted ten hours at this time.
Owner: Fylkesarkivet i Sogn og Fjordane/Kjell Eikemo. - Date: 1920-1925. - Photographer: Ukjend.
Fylkesarkivet i Sogn og Fjordane/Kjell Eikemo.
1920-1925.
Ukjend.
resources:
Zakariassen, Hans: Teglindustriens historie. Side 191 f.
Sogn og Fjordane fylke, femårsberetning 1901-1905.
Losnegård, Rolf, o.fl.: Dalsfjordboka. 1999.
Sogeskrift for Askvoll kommune. nr. 3. 1990 og nr.10, 1997.