Leikanger church is a wooden longchurch located in the village of Leikanger on the eastern side of Stadtlandet in the municipality of Selje. The church has a seating capacity of 400, and was consecrated on 28 October, 1866. It was built by using the material from the old Selje church which was torn down the same year. The architect in charge of the rebuilding in 1895 was Lars Sølvberg. As of 1 January, 1997, Leikanger church is the "sokn" church for the Leikanger "sokn" in the Selje parish. 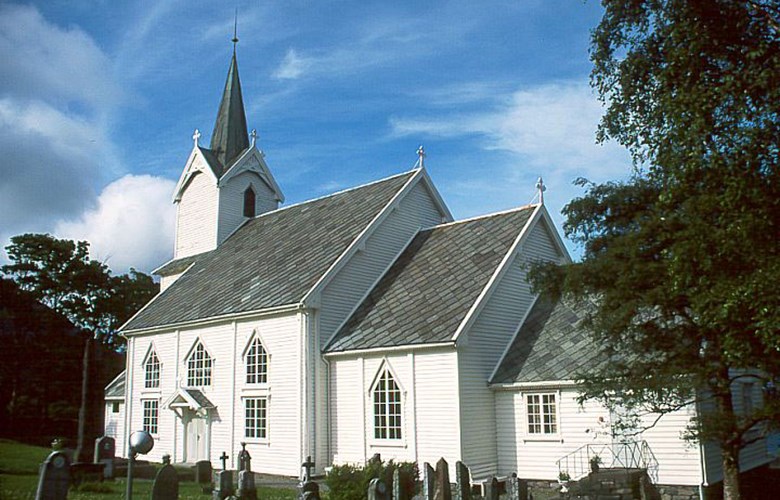 Leikanger church has had three different locations: Bø on the island of Selja, at Selje and here at Leikanger.

The third site for the same church

The church building at Leikanger is now at its third site, but is hardly recognizable of the church that was erected at Bø on the island of Selja in the late 16th century. From 1654 to 1866, the church was located at Selje before it was moved to its present location. It has later been rebuilt, and actually has three altarpieces, from each of its former three church sites.

The old church at Selje was torn down shortly after the last service was held on 22 April, 1866, and all the building material was transported on a square-sailed "jekt" around Stad. Half a year later, the church was ready for use. No other church in the county has moved so many times as Leikanger church. As the church was not new, the Ministry for Church Affairs decided that it was not necessary to organize a new consecration. Instead, a suitable ceremony should be carried out in connection with the consecration of a new churchyard.

The church was erected in the centre of the village of Leikanger, a couple of hundred metres from the sea. There had been no previous churches at Leikanger, but the religious roots were deep. At the isthmus of Dragseidet, about a kilometre further up the hillside, Olav Tryggvason had organized an assembly and introduced Christianity in the four western Norwegian counties in 997. The old road across the Dragseidet, where ships were hauled across to avoid sailing on the dreaded, weather-exposed stretch of sea called Stadhavet, passes close by the church site and further up to the stone cross at Dragseidet.

The new "Legangers Capel" was built with only minor changes to the former church at Selje. The three windows on the south wall were extended, and, in addition, three windows were put in on the north wall, where there had been no windows before. The most significant change was that the church was made somewhat shorter than the old church at Selje in order to be better suited to the population of Stad. This proved to be a short-sighted solution, however, because the church soon became too small. In good weather the room problems was solved by taking out the windows so people could sit on the ground outside and listen to the service inside. The clergyman Johannes Ristesund from Kvamsøy in Sunnmøre later wrote about the singing of hymns at Leikanger: It was like listening to the rolling waves on the Stadhavet. Those who were sitting outside joined in the singing, and it sometimes happened that those outside and those inside had to wait for one another, in order to keep the same rhythm".

In 1895, the church underwent a major rebuilding and extension that the old church was hardly recognizable. The church was literally split in two lengthwise, and the west wall moved out and placed on a new foundation wall. Much of the old building material was replaced. A new steeple was built in framework construction, and the exterior walls were panelled. After the rebuilding, the church was twice as big as before with an almost square nave, measuring about 12.5 by 12.5 metres, and a nearly square chancel, about 10 metres wide, and six metres long. The porch to the west measures about three by ten metres, whereas a later addition of seven by metres to the east contains the vicar's vestry (also used as a meeting room) as well as a baptismal vestry. You cannot see any material from the old church in the interior or the exterior of the church, but there is supposedly some very old material concealed in the walls, perhaps dating from an even older church than the one that stood at Bø. There is also supposed to be a beam in the church that originally was a keel of a boat. 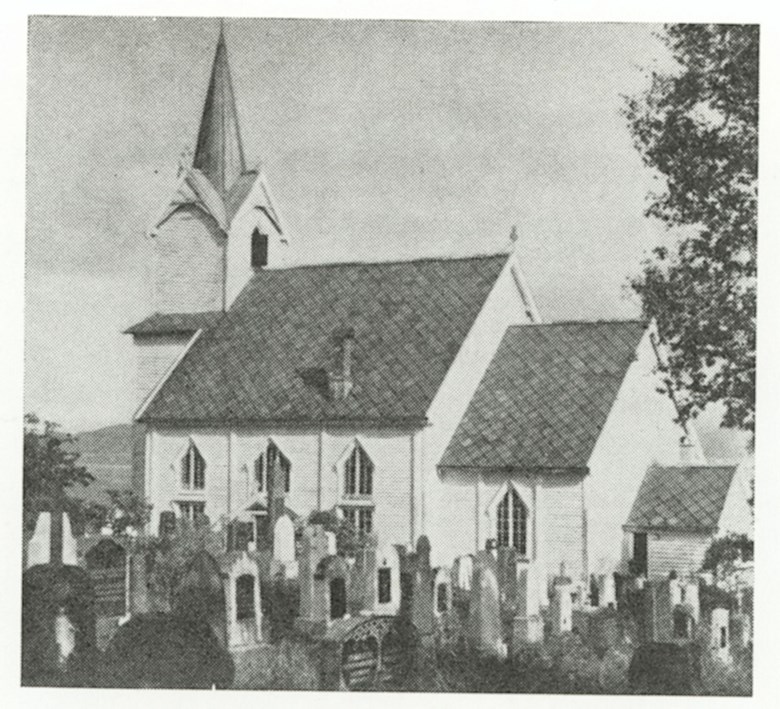 There is unpainted panelling on the walls, both in the nave and the chancel, whereas the ceiling is open up to the ridge with white-painted panelling. The other main colour scheme elsewhere is grey and green, but the gallery front and the railing between the nave and the chancel has two narrow stripes of orange which is a marked contrast to the other colours in the church room.

Two of the altarpieces

The altarpiece from 1694 was formerly in the Selje church, and served as an altarpiece in the Leikanger church from 1866 to 1895. The crucifixion scene is painted by Alexander Didrichsøn Fester, merchant in Måløy and an amateur artist. The yellow-brown cross has an inscription at the top. The facial expression and the greyish-white colour portray Christ as dying. At the base of the cross is a skull and two crossed bones. To the left is Mary in a red robe and light blue shawl on her head. To the right is John in a pale yellow coat and a red cloak with a belt around his waist, in the background Jerusalem and some bystanders. The sky is sombre with grey-green and brownish-red clouds. The ground is also brownish red, but a white lily in the bottom right corner is a sign of life and hope. Below is the inscription: "Behold the Lamb of God" (John 1;29) 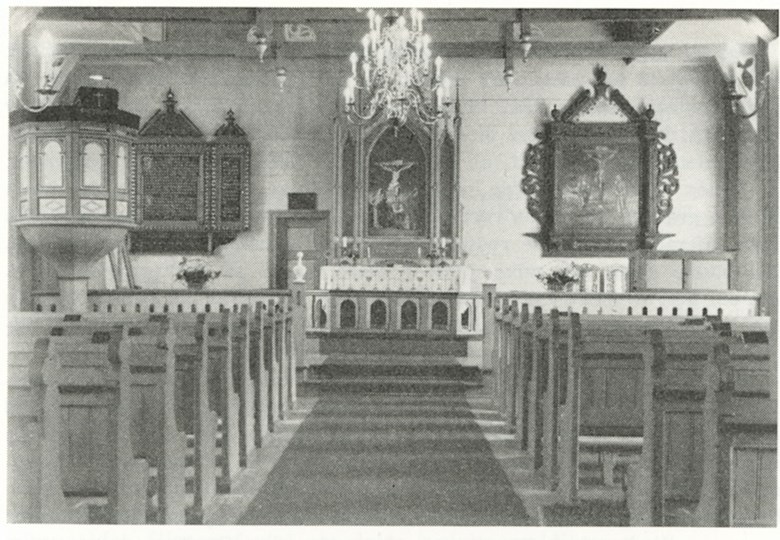 The altarpiece from 1895 depicts the Colgate scene with Mary and John on either side of Jesus on the cross, and a woman who is clutching the base of the cross (probably Magdalene). The altarpiece is painted in Paris by Hanna Terese Lund (1849-1923). It is a copy of Rubens' (1577-1640) Crucifixion (1620). The altarpiece in Leikanger is one of the last known works by Hanna Lund. 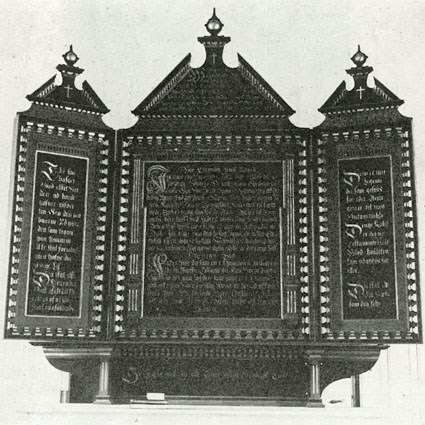 Four wooden crosses from 1996 were used as "cross messages" in the four "old counties" of Sogn, Fjordane, Sunnmøre, and Romsdal, in connection with the invitation to mark the millennium celebration at Dragseidet for the Norwegian Church. Each cross has signatures of the congregations the cross passed on its way to Dragseidet. "Cross message" is an ancient church custom which is prescribed in the "Gulating" law.

The church collecting box, dating from before 1600, is a hollow block of wood with iron mountings and lock. The organ from 1970 has 17 registers and is made by "Vestre Orgelfabrikk". The old organ from 1878 is stored in the church attic. According to the Directorate for Cultural Heritage, this organ is worthy of preservation. The church bell from 1878 is made by O. Olsen & Søn, Nauen, Tønsberg.

In 1895, the church underwent so much rebuilding and extension work that the old church was hardly recognizable. The church was split in two lengthwise, and the west wall moved out and placed on a new foundation wall. Much of the old building material has been replaced.
Owner: I <i>Selja i tusen år.</i> - Date: 1940-åra. - Photographer: Ukjend.
I <i>Selja i tusen år.</i>
1940-åra.
Ukjend.

In the church room, a conspicuous feature is the wide chancel wall with the three altarpieces now hanging side by side. In the middle is the altarpiece from the oldest church on the island of Selja, to the left is the altarpiece from the church at Selje, and to the right is the new altarpiece made after the church was moved to Leikanger. No other church in the county has so many altarpieces, and elsewhere in the country it is highly exceptional to have so many altarpieces in one church. Furthermore, the Leikanger church contains altarpieces from each of the three former and present church sites. The pulpit and the baptismal bowl also come from the oldest church at Selja.
Owner: I <i>Selja i tusen år.</i> - Date: 1966. - Photographer: Ukjend.
I <i>Selja i tusen år.</i>
1966.
Ukjend.

The altarpiece from 1600 comes from the old church at Selja. It is an elaboration of the simplest and oldest type of catechism altarpiece, with richer decorations, doors that can be swung, as well as broken gable sections. Another new feature is the painted columns in the mid section. The text in the gable section is taken from Mark 16;15-16 ('Go ye into all the world, and preach the gospel to every creature..', whereas the main section contains the Apostle's Creed and the Lord's Prayer. The side section to the left has on top the text from John 3;16 ('For God so loved the world, that he gave his only begotten Son, ..'), and below the first part of the double love commandments ('And thou shalt love the Lord thy God with all thine heart..'. The side section to the right at the bottom contains the second part ('Thou shalt love thy neighbour as thyself..' and on top the text from Luke 22; 19-20 ('This is my body which is given for you: ..'). At the base of the altarpiece is the text of the Great Commission according to Matthew 28;18-20.
Owner: I <i>Selja i tusen år.</i> - Date: 1966. - Photographer: Ukjend.
I <i>Selja i tusen år.</i>
1966.
Ukjend.