The wooden clog factory at Selvågen

The farm of Selvågen is located in a small bay on the east side of the strait of Brandangersundet in Gulen. In 1900, a wooden clog factory was established there. The production of clogs came to an end in 1975 after 75 years. In 1994, the clog factory was included in the Directorate for Cultural Heritage's protection plan for technical and industrial cultural sites. 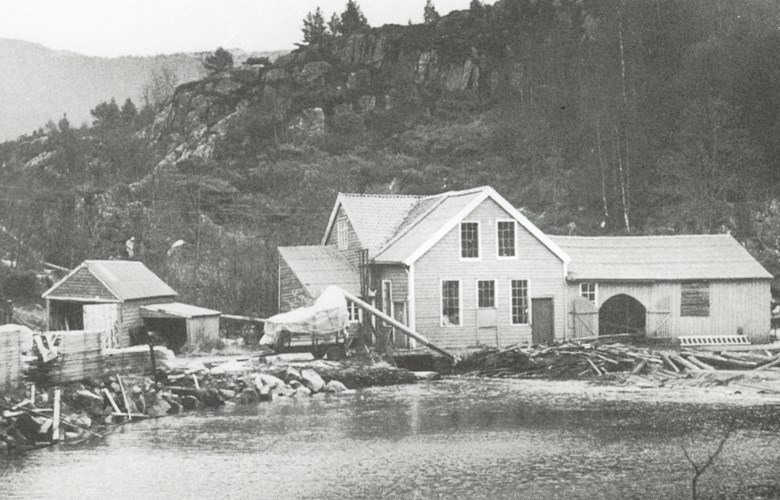 The clog factory in the small and narrow bay of Selvågen is located where the waterfall from the lake of Selvågsvatnet flows out into the bay. From 1900 to 1952 the name was "Bergens Træskofabrik", but then changed its name to "Sellevåg Treskofabrikk".

The farm of Selvågen in Gulen used traditional farming methods in the cultivation of corn as well as animal husbandry. Close to the farm there is a waterfall coming down from the lake of Selvågsvatnet and flows into a small and narrow bay. Early on a watermill was built there, and the first reference is found in the land register from 1723.
In 1870, Endre Torkjelson (1837-1913) bought Selvågen for 400 "speciedalar" He had been a tradesman at Lovisendal in Brekke. Endre Torkjelson started a mill operation in the waterfall and ran this until 1899. In that year he sold the waterfall and 0.20 "skyldmark" of the property to "Bergens Træskofabrik" (Clog factory). The factory was run by the two Bergen men Chr. Arentz and John A. Kahrs. The following year the new factory was completed and the production of clogs started up.
In the 1900 census, six persons are named as workers at "Bergens Træskofabrik". Three of these lived at Selvågen, two at Furenes and one at Brandanger. Torkjel Olai Selvaag, son of Endre Torkjelson, was foreman at the factory. The new industrial activity gradually led to an increase in the population of Selvågen.

Timber from the inner Sogn area

In those days it was very common to start up industrial activities in the neighbourhood of waterfalls. Waterpower from the waterfall was a stable and reliable source of energy. However, the timber raw material had to be fetched from faraway places. Past Selvågen there was a steady stream of boats ("jekts") from Sogn and Sunnfjord on their way to Bergen. The "jekts" could deliver the raw material for the clog production from the inner areas of Sogn, and later transport the finished clogs to be sold in Bergen. In the town there was a big demand for clogs at the turn of the century (1900).
The raw material used in the clog production was pine, preferably knotless. Most of the raw material came mostly from the inner Sogn area and some from Hardanger. At first "jekts" transported the timber to Selvågen, but later on freighters took over the transport. The logs were floated into the narrow bay below the factory at high tide and were kept in the water inside booms. The logs were hauled up to the factory as the production demanded. Initially a hand-driven windlass was used, but later this was replaced by a winch.
It was an advantage to keep the logs in the water as they were better preserved that way. Across the entrance to the small bay a wall was built to keep the same water level all the time so the timber could float. At low tide the river provided enough water to fill the bay.

The waterpower was utilized by the building of a double rock dam with a hatch. From the dam there was a turbine pipe down to the turbine itself at one end of the factory building. The so-called Francis turbine was built for low waterfalls. By means of axles and driving belts the power was transmitted to the various machines in the factory. Dry periods were rare, but they happened occasionally. In that case some other necessary work had to be carried out by hand.

In order to make clogs, the first thing to do was to rough-finish the raw material and this was done on a band saw. A "skant" (yardstick), a kind of template, was used in the work of cutting the various sizes and models. Inches were used as measurements, and the smallest size was 6. Then there were sizes in quarter inches up to 11 ½. Various clog models were produced, the so-called "Sogn" and "Stril" models. The Sogn model was somewhat wider and also had a more rounded toe. Gradually only one model was manufactured, the Stril model.
In order to cut out the clog, the templates were laid on the raw material and then the workers cut around them. Two templates had to be used for each shoe, one from the side and the other for the sole. First they cut the profile from the side and then the sole. One right shoe and one left shoe. All knots had to be removed.
Usually 25 pairs of clogs were produced every hour. The machines decided the speed, but with small sizes the production could go faster. Four men worked on individual machines, trying to keep the same tempo. If not, the work would come to a halt.

After the raw material had been coarsely cut, it went further to the copying machine. A machine formed the clogs after a fastened original model. A sensor milled the clogs accurately after the model. There were two such copying machines with rotating knives. These could shape right and left shoes simultaneously.
Then the clogs went back to the band saws where the ends were cut clean. Now the exterior work was completed, but the work remained to hollow out the clogs. Two machines were used for this process, one to make the opening and the other to drill forward inside the shoe. For this process they also used a sensor and an original. However, much work still remained. The clogs had to be polished on the outside and the inside. The outside used to be polished by hand in the first few years, but after a while they invested in a polishing machine. For the interior work chisels were used, one for the bottom and one for the sides. A sheath knife was used to smooth the edges.
The lacquering process took place in the attic. A black lacquer was laid on the sides and on top, but the clogs were untreated underneath.

From factory to cultural heritage site

At full production about 60 000 pairs of wooden clogs were made annually. At first they were sent in sacks, but later on in wooden crates by boat to Bergen.
Up until the Second World War, there was a high demand for wooden clogs, but this demand gradually declined in the after-war years. The production was reorganized and a production line of wooden handles for various tools was established. In 1952, the company "Bergens Træskofabrik" sold the factory to Joakim Torkildson Sellevåg. He continued the operation under the name "Sellevåg Treskofabrikk". The production of handles and clogs came to an end in the 1960s, but a sawmill was still in operation. The demand for handicraft products for "rose painting" meant that the production of clogs was resumed after some years.
The maximum number of employees was 20. In 1975, the production of wooden clogs was terminated. In 1973, Magne and Jetfred Sellevåg took over the factory and they have continued with the sawmill operation. In 1994, the clog factory was included in the Directorate for Cultural Heritage's protection plan for technical and industrial cultural sites.