Frøya church is a wooden longchurch located at Frøyalandet in the municipality of Bremanger. The church - with a seating capacity of 400 - was consecrated on 11 December, 1865, by the dean Johan Carl Christie. The architect was the painter artist Anders Askevold from Askvoll. Frøya church is a "sokn" church for the Frøya "sokn" and is also the main church in the parish of Bremanger. 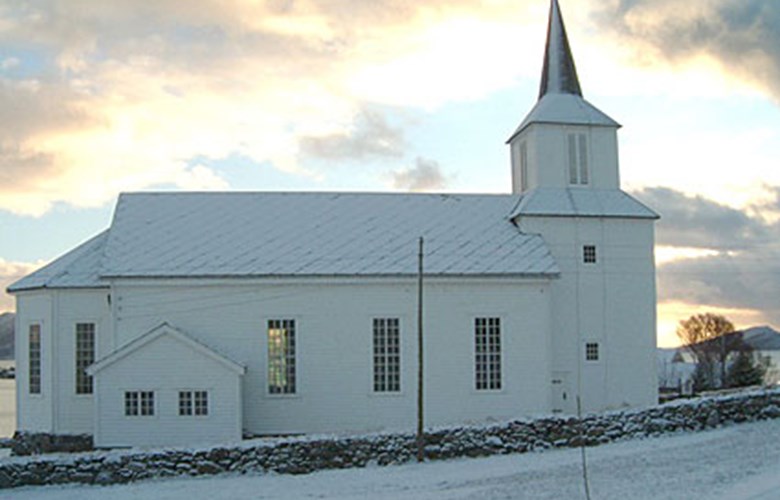 On the island of Frøya a wooden longchurch with steeple and spire was erected in 1865. The church has a beautiful location on the inner part of the island. However, it is extremely exposed to the elements, and the vicar Koren therefore did not expect the church to be standing there for a long time.

The name of the church

The process of changing names did not happen without some political discussion, and the matter was not resolved until the local historian Albert Joleik had written a critical report. In this report from 1948, Joleik concluded that by naming the Frøya church and its ¿sokn" after the neighbouring village was in a way against the 9th and 10th commandment. There was no honour in taking another man¿s property, and especially when the owner wanted to have his returned.

The name issue was one thing. Another discussion going on at the time was when the issue was raised to move the church site from Grotle to Frøya. The matter was raised as early as when Hans Irgens was vicar (at Kinn from 1840-1855) because the location of the church site was so inconvenient to all parties. Besides, the Grotle church was in a very bad state. The vicar Ulrik Koren later wrote in his diary that the church situation in the 1860s was not particularly pleasant as long as they had to use the dark old building. The church was falling apart, and when many people were congregated, it was even dangerous.

But where was the new church to be located, then? Before Koren came to Kalvåg in 1864 as the first vicar in the newly established parish of Bremanger, the localisation issue had already been debated for a while, and the people who lived on the island of Frøya and those who lived in the villages on the other side of the sea of Frøysjøen wanted the church to be moved to Frøya. However, the people in the Bremangerpollen area protested. Instead, they wanted two smaller churches to be built, one at Bremangerpollen and the other at Kjelkenes. Many aspects had to be taken into account, and the discussion dragged on for some years, but the eventual choice was Frøya. In the royal decree of 28 March, 1863, a point was added that the vicar in the new Bremanger parish had to be prepared to function in yet another church which later was to be built in the district of Gulen. Many vicars came and went before this point came into effect as the Midtgulen church was not completed until 1904.

People from Gulen and Botnane all got a shorter way to church than before, but they still had to cross the sea of Frøysjøen. The Bremanger people were in a luckier situation, but it was bad enough to go by boat round the point of Novene to get to church. In 1914, ten years after the Midtgulen church was built, the Bremangerpollen church at Hauge was consecrated. On the island of Frøya a longchurch in timber with steeple and spire was erected in 1865. The vicar Koren then wrote that the church was beautifully located on the inner part of Frøya, but it was still very much exposed to the elements. He thought that the church would be so much exposed to stormy weather that it would not be standing there for very long.

Koren refers to the interior of the church as a spacious and light house of worship with a new beautiful altarpiece. The congregation disagreed whether the pews should have doors or not. The ¿door people" won the day, which Koren thought was a mistake. In his opinion the doors were neither decorative nor useful, and he predicted that the doors would be removed by and by. The vicar was proved right, because in 1940, the pews were replaced, and at the same time a new floor was laid, and wainscot was put up on all the walls. All of this was painted in oil.

The chancel in Frøya church has five side walls of the octagon, a symbolic form also found in the pulpit. There are galleries on either side of the chancel with a good view of the congregation below. There are four high, simple latticed windows in the chancel. They all have light curtains to soften any glare from the sun. The windows in the nave are similar to the ones in the chancel. The main colour scheme in the church is light blue and green, but with a contrasting reddish brown colour on the door frames, mouldings, and on the side walls of the pews. The lye-treated walls give the church room a warm atmosphere. The main gallery in the west end protrudes on either side, and the whole front is divided up into blue sections with small red-speckled, decorative columns in between. The pulpit is also decorated in the same way. The gallery rests on five solid columns in the central nave. Between the chancel and the nave there is a small partition slightly higher than the altar rail.

The old altarpiece from the Grotle church draws the historic lines back to a life rich in church traditions among the coastal population. It was the blue colour in this object of art which formed the basis for the choice of colour scheme when the Frøya church was redecorated prior to the centenary celebration in 1965. For the centenary, an extension was built on the northern side of the chancel with toilet facilities and a spacious, combined baptismal vestry and meeting room.

For the first few years, the church had a rather high spire, but the harsh weather conditions made it impossible to keep it in place. In addition, it was hard to prevent the turret roof from leaking. In 1933, the old steeple was torn down and replaced with a new one with a broader base. In the turret base a larger porch was built. The turret neck was built square and low, and today it is decorated by a rather short and sturdy spire, better adapted to the prevailing weather conditions. Electric lighting was installed in 1949, and electric heating in 1958.

The altarpiece from 1865 is made by Anders Askevold. The motif "The Holy Communion" is most likely a copy of the painting by Rubens (1577-1640) entitled ¿In praise of the holy communion".
On the altar there are two tall pewter candlesticks from 1965, and two three-branched candelabras in silver from about 1960. The Holy Communion objects consist of a chalice from 1865, a dish from about 1930, a chalice and a dish dating from 1953, a pyx from 1865, and a wine cruet. The pulpit and the font both date from 1865. The oldest of the two brass baptismal bowls comes from the old Grotle church, whereas the other one dates from 1865. In addition, there is a holy water ewer in silver.

The old altarpiece dates from 1752. It hangs on the north wall in the nave, and it consists of three sections: a bottom section with an inscription, a central section with a painting portraying the institution of the Holy Communion, and a top section with the Calvary scene. On the left-hand side of the top section there is a sculpture of Moses with the law tablets, and to the right is a sculpture of Aaron as high priest. At the very top there has probably been a wooden sculpture of the victorious Christ, but this is now gone. The bottom section has an inscription (Matthew, 12; 28) with golden letters on a black background. Professional assistance will be needed to preserve this altarpiece for future generations.
The wall tapestry from 1965 is made by Johanne Førsund. The organ from 1926 has 12 registers and is made by ¿Vestre Orgelfabrikk". The church bell from 1865 has the inscription ¿Bremanger 1865. Glory to God alone". It is made by "Laxevaags Værk".

Strong and somewhat dark colours in combination with good lighting and lye-treated walls give the church a warm atmosphere. The chancel is open and wider than most churches. The colours are inspired by the altarpiece and have characterised the church room since the centenary celebration of the church in 1965.
Owner: Bremanger kyrkjekontor. - Date: 2003. - Photographer: Knut Arne Vadøy.
Bremanger kyrkjekontor.
2003.
Knut Arne Vadøy.