Loen church is an octagonal wooden church situated on a hill overlooking the village of Loen. The church has a seating capacity of 190, and was consecrated on 9 September, 1838, by dean Wilhelm Frimann Koren on behalf of bishop Neumann. The master builder was Elling Waldboe, but there is no reference to any architect. Loen church is the "sokn" church for Loen "sokn" in the parish of Stryn. 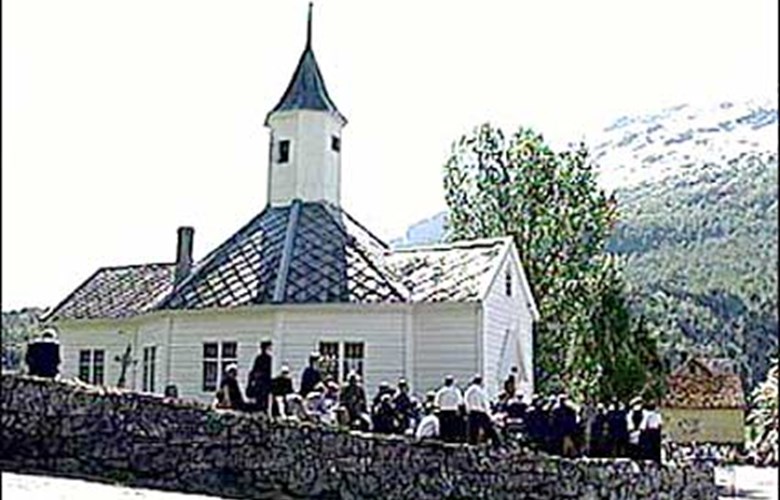 Loen church, situated on a small hill above the centre of the village, can seat only 190, and is thus one of the smallest in the region of Nordfjord. The nave is formed like an oblong octagon with three windows on either side, and in the middle of the roof there is a small octagonal steeple. The interior walls are painted in grey, the vaulted ceiling is painted in a light colour in the centre and a reddish-brown on the sides. In the east end there is a square chancel, and later on an extension was built, containing the vestry. The chancel has small-paned windows on the side walls, and a ceiling painted in a light blue colour, which gives a pleasing contrast to the elegant, old interior. The chancel partition consists of two columns towards the centre and balustrades up on each side. The nave is 12.5 metres long and has a maximum width of 10 metres. The almost square base of the chancel measures 5.5 by 5.5 metres.

The porch in the west end has outside stairs on the south side. As the church has no gallery, the organ has a rather unusual place in a room on the way up to the steeple. From the church room we can see the organ pipes and catch a glimpse of the organist's face. The church colours have remained unchanged since the centenary festivities in 1938. In that year the organ got its present placing, and electric lighting was installed. In the same year some of the old interior objects were returned to the church. 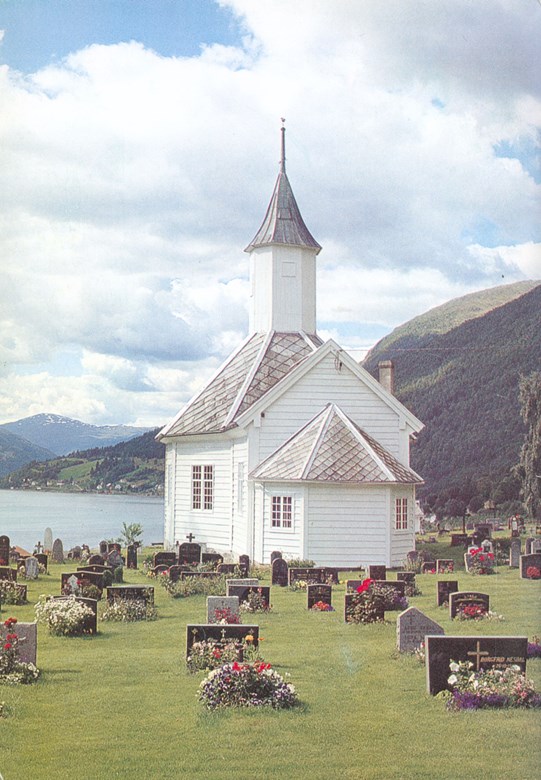 Modelled after the Innvik church

In the local history book the church building is described in rather critical terms. According to the writer, "the church cannot have been built based on designs as the cog joints have been made in a haphazard way. There is little correlation between the various parts of the church, and, for this reason, does not have the same elegant style as its sister church at Innvik". This is laying it on thick when he says that the church was erected in a haphazard way. The church was built in a fairly accurate east-west direction, and experts are of the opinion that the building shows a well-planned construction. The master builder has obviously been inspired by the Innvik church, even if the various parts of the Loen church do not show the same degree of harmony. At any rate, this small house of God is a characteristic feature in the village, and, as the church has not been subjected to any significant renovation and changes throughout the years, the Loen church is one of the best preserved churches of its kind in Norway.

The altarpiece and other interior objects

The altarpiece probably dates from the early 17th century. It is a so-called catechism altarpiece which, after a decision by a Bergen synod in 1579, for some time superseded altarpieces with painted pictures. The altarpiece frame is the most characteristic feature. The semi-circular wings, the angel heads, the decorated moulding are all typical examples of a factory-like production in Bergen at that time. Both the altarpiece and the pulpit in the Loen church have most likely been made in Bergen. Only in 1667 was the altarpiece installed, and later on installed in the new church. After some time, the altarpiece was painted over, and then restored in 1937-38 by Domenico Erdmann and Olav Seter from the Directorate for Cultural Heritage. The altarpiece consists of three arched fields of equal size showing catechism texts. The upper mid-section has a simple cross with the Christ monogram IHS 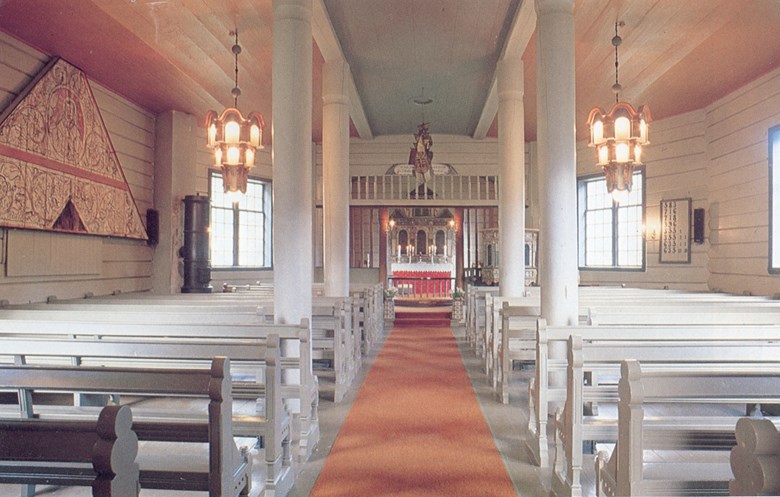 On the altar there are two three-branched candelabras in silver from 1975, as well as two big bronze candlesticks from 1977. The Holy Communion objects consist of two chalices, one in silver, and the other in silver plate, a dish, pyx, and a wine flagon, all three in silver plate.

The pulpit from the 17th century had the same place also in the old church. It was restored in 1937-38. A very old, golden chasuble, maybe dating from the 17th century, is also found in the church. There are two church bells, one may date from the Middle Ages, and the other, with an inscription in Latin "(The Lord's) Words last forever", dates from 1594.

On Wednesday, 16 September, 1936, the small octagonal church in Loen was the mourning place for the bereaved after one of the most tragic natural catastrophes in this country. Outside the church 21 coffins were lined up with bodies from the second Lodalen disaster.

The funeral was broadcast on national radio. Only the closest relatives were allowed inside the church. The then Crown prince Olav sat in the chancel, representing the Royal Family. His presence conveyed the Royal Family's sympathy in the tragedy that had hit the small rural community so incredibly hard three days earlier.

The day of the funeral was marked by quiet mourning and the gravity of the moment. The Loen vicar in 1936, Eilert Eriksen, later gave his account how it was to be standing in the midst of this tragic event. He simply put it like this: "There is a kind of sorrow that is so hard to understand that we fail to find words to express it. We can only sit down and weep together." After the first funeral, others followed. A total of 33 bodies were found and buried. The remaining 41 persons who lost their lives vanished in the Lovatnet lake.

However, this was actually the second time that disaster struck the rural community. Some 30 years earlier, in 1905, a large slab broke loose 500 metres up in the mountainside of Ramnefjellet and crashed into the Lovatnet lake. It caused a tremendous flood wave which nearly swept away the hamlets of Bødal and Nesdal. In the 1905 disaster 61 persons lost their lives. Only nine bodies were found, the other 52 found their graves in the lake.

The people of Lodalen were faithful church goers in the Lo church as it was then called. On the rare occasion that their seats were unoccupied, the usual reason was that they could not cross the lake that day. The church provided them with comfort to come through the tragedy that had twice struck this small rural community. Here they could mourn, and pray to God for comfort and strength.

From the interior of the Loen church. To the left is the triangular painting which dates from approx. 1650. It is four metres wide and painted on wooden boards. The motif is 'The blessing Christ' in a Renaissance style. The painting was 'refound' in the church attic by the vicar Eriksen, restored by Domenico Erdmann, and put up on the northern wall in connection with the centenary festivities in 1938.
Owner: I <i>Loen kyrkje 150 år 1838-1988.</i> - Date: 1988. - Photographer: Olav Jakob Tveit.
I <i>Loen kyrkje 150 år 1838-1988.</i>
1988.
Olav Jakob Tveit.