Tungodden - signal station in a rain of bullets

It is hard to believe that the Germans would build a signal station on the outermost point of Oddenova. The temptation became too great for the allies to let this bold monster operate freely.

After the MTB attack in 1943. The station, which was about 25 metres above sea level, was immediately abandoned, but after a short time, the work on a new station, with better cover further inland, was started.

A place more blessed by nature for security can hardly be imagined. Tungodden cuts into the Sognesjøen so far that there is an unobstructed view of the sea-lanes of Ytre and Indre Steinsund, and a wide open view of all movements on the Sognesjøen.
The terrain of Oddenova is completely flat out to the drop into the sea on the west side, toward the sea-lane of Ytre Steinsund, and extremely exposed to wind and weather with no rocks to hide behind. The Germans came here in 1941 and started building. A building in 2 ½ storeys outermost on the cliff to the sea, without any protection in front, was asking for countermoves. 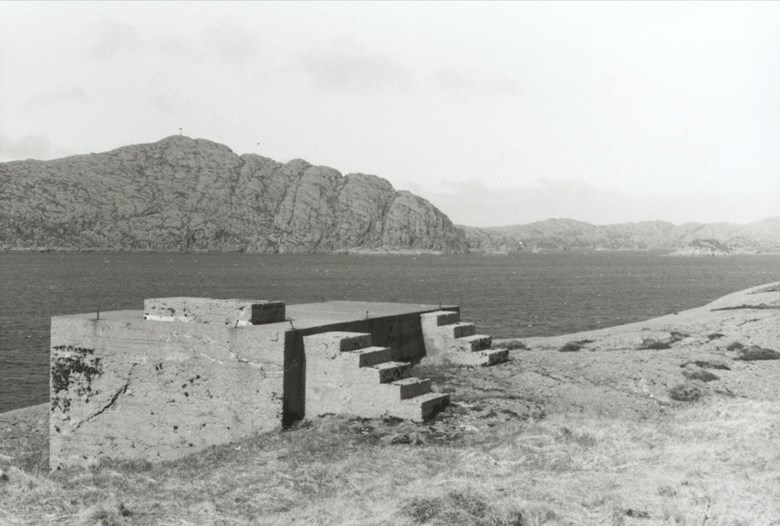 Solund had at that time no electric power supply, no roads, and only a few large quays. At Tungodden the harbour conditions were poor, and there was no quay. The Germans put all the building materials ashore at Novegytten, where wind and weather from the south are strong and unpleasant.
The station was of standard build: a central building for the crew with living quarters and a kitchen, on the first floor a telegraph station and lookout tower. Ten metres to the north there was the air-raid shelter with a room for a power generator and a depot for weapons and equipment. Around the station there were several gun positions, and round the whole installation barbed wire and landmines. A spring of water with excellent capacity emerged during the construction.

In addition to the signal station, the installation was meant to be a passport checkpoint for local vessels and fishing boats. For this reason Nils Enstad stopped here on his way to Sogn with a load of weapons. The vessel waited on the water, with seine over the hatch, while Nils rowed ashore and received a new stamp in his passport.
Clearly visible toward the horizon over low land, the station monitored a very important territory, and was a tempting target for planes and naval vessels. Early in February 1943, two sub-chasers (MTBs) with infantry soldiers on board visited Krakhella and picked up the radio operator Oskar Netteland, and Tungodden was their target.

Bullet holes from below, through the chairs

They spent a week under a camouflage net near Gildreneset, but bad weather obstructed them. They needed good weather because the boats would have to cross the North Sea at full speed after the attack. On a late evening at the end of the same month, two Norwegian MTBs (motor torpedo boats) sailed in under cover of Oddelandet, stopped below the station and opened fire. Then full speed out to sea. Signals about a hostile attack went immediately to the German security vessel south of Tungodden. The vessel opened fire on its friendly station, believing that it had been taken. This made the devastation even more total. Two German soldiers were killed. In the confusion the Germans fired at one of the two residential houses on the farm.

In cracked rowboat without a boat drain plug

The people at Tungodden fled in rowboats east to Steinsund during the night. Wounded German soldiers set out to sea in a leaky boat, rowing the 7-8 kilometres to the doctor at Hardbakke.
After this attack a new station was built further inland on the cliffs closest to the farmhouses, in much better cover. Now only the uppermost part of the watchtower was visible from the Ytre Steinsund sea-lane. They built low barracks, and were undisturbed for the remainder of the war. The old station was dismantled. The new one stood for some time after the war, but all the buildings are now gone. The station at Tungodden was manned by 7 - 12 persons.