The waterfalls in Flåm and along the Aurlandsfjord

In the valley of Flåmsdalen and along the Aurlandsfjord the landscape is dominated by a number of waterfalls. Some of them are among the most famous tourist attractions in Norway, such as the waterfalls of Rjoandefossen and Kjosfossen in the river of Flåmselvi. Flåmselvi was protected against any hydro-electric development in the so-called "Verneplan III" (Protection Plan III) for watercourses. 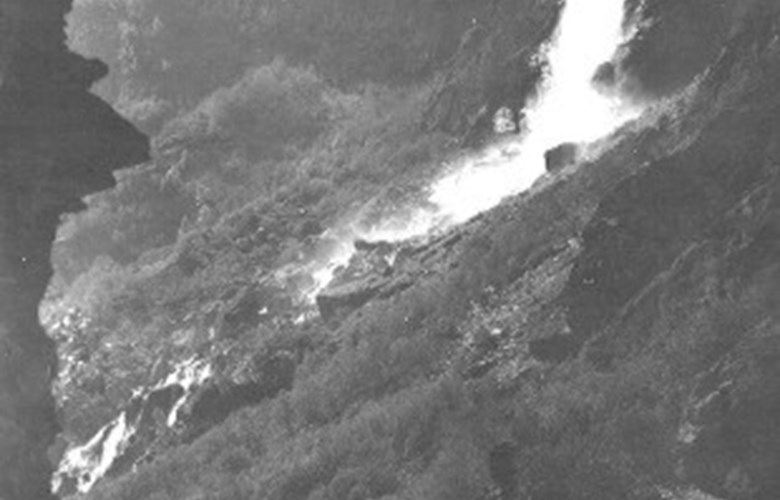 An old postcard showing the impressive waterfall of Rjoandefossen and the challenging terrain the construction workers of the Flåm Railway were faced with.

The waterfall of Rjoandefossen
Rjoandefossen flows down into the valley of Flåmsdalen east of the lake of Vassetvatnet. According to the name expert Erlend Vinjum, the name of the waterfall may be interpreted by the first part of the word: "Rjoande". This can be explained with the Old Norse verb "hrjoða" which means to throw off or spread. This agrees with the way the waterfall plunges down a 140-metre-high precipice and then spreads out when hitting the ground.

The waterfall of Kjosfossen
Kjosfossen is perhaps the best known of the waterfalls in the Flåm valley watercourse. It has become a major tourist attraction as the Flåm Railway makes a stop there so tourists can take pictures at close range and may even catch a glimpse of the dancing wood nymphs.

By the waterfall there is the Kjosfoss power station that provides electricity for the Flåm Railway. The lakes of Reinungavatnet and Seltuftvatnet have been regulated to function as reservoirs for the power station. The regulation work in 1944 led to an erosion of a gravel ridge at the eastern end of Seltuftvatnet. By and by large amounts of slag, charcoal and burned rocks were uncovered. It turned out that these were remnants of an iron forge dating back to the early Iron Age, to the first years AD. These finds are still the earliest iron forges ever found in Norway.

In addition to fine waterfalls, the area of Fronnes and the valley of Frondalen has an exciting history, a beautiful culture landscape as a result of farming and mountain-farming activities. There are also finds from prehistoric times, such as an old site that may date from the Iron Age. We also find a number of burial mounds - nine in a cluster, and one separated from the others. These mounds have not been dated, but according to the county archaeologist Eva Moberg, they may date back to the Bronze Age (the period between 1800 and 500 BC), based on their location and appearance. The farm Frondalen is also referred to in the Sverre Saga, in connection with king Sverre and his followers called "Birkebeinarane" losing their way in the mountains because of bad weather. Thus king Sverre ended up at the farm in Frondalen in 1177.

Fronnes is a much-used area for hiking by tourists and local people alike. In 2006 a management plan for Fronnes was worked out, and this is meant to be useful in the management of the area.

The waterfall of Flugandefossen
Flugandefossen is located along the Aurlandsfjord, directly opposite the village of Aurlandsvangen. The waterfall has a drop of 75 metres and is included in the list of important waterfalls within the Nærøyfjord World Heritage area. Maybe the waterfall has got its name because of its gentle and flying character?

According to Erlend Vinjum, longline fishing in the fjord was an important source of income in the 1920s and 1930s. Lines were placed along the whole length of the fjord branch at regular places known as "sett". One of these "sett" was located at the point of Flugandeneset by the waterfall, where the line was tied to a wire on land and rowed out into the fjord in the direction of a house called "Duehuset" at Aurlandsvangen.