Davik church is a wooden longchurch located in the village of Davik in the municipality of Bremanger. The church, with a seating capacity of 500, was consecrated on 6 July, 1886, by the bishop Fredrik Waldemar Hvoslef. The architect Georg Andreas Bull made the designs. Davik church is a "sokn" church for Davik "sokn" in the parish of Davik. 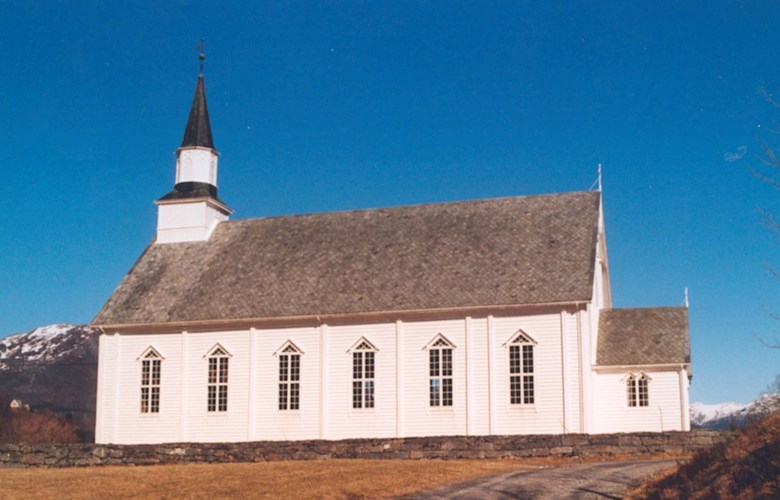 In the 1870s and the 1880s, Davik experienced an unusually hard conflict as to the location of the new church. The long-established church site on the southern side of the fjord met with competition from the only alternative that the 'sokn' council went in for, viz. a new church at Haus, on the opposite side of the fjord. The diverging opinions were decided by where people lived.

In 1870, the then dean Wilhelm Frimann Koren raised the issue of a new church in Davik. The old cruciform church frequently proved to be too small. Many members of the congregation had complained about this, and they were supported by the church staff who confirmed that there was not enough room in the church. In the following years, size, choice of building material, as well as financing of the project were taken up for discussion, but only in 1876 did it turn into a major conflict on the subject of location of the new church.

However, people on the southern side protested. The vicar Lassen supported those who objected to the building plans at Haus, and this protest movement gained support also from people at Ålfoten and Davik. They were far from willing to let their children cross the fjord to prepare for their confirmation, and people from Rugsund also joined in the protest. One of the arguments used against a church on the northern side was that the landing site was not good enough. The "sokn" council, however, adamantly stuck to their decision. In their opinion, it would be dangerous to build a church at such a weather-exposed place as Davik, and argued vehemently against those who opposed moving the church. The council had decided to put in an advertisement in the local papers "Fjordenes Blad" and "Ålesunds Tidende" to invite tenders for building materials.

The construction work started in 1885

The many opponents, however, were working behind the scenes. The vicar Nikolai C. Lassen wrote a letter on the matter to all the relevant authorities. A "reliable man" from the southern side, Martines O. Frimannslund, was sent to Bergen on many occasions to explain the issues to the diocese board of directors. The arguments flowed back and forth for many years. For a while the construction work was stopped completely when the Ministry of Church Affairs opposed the building of a church at Haus. The "sokn" council had the mayor Ole Haus on their side, and Haus was the only alternative. After having sent an application and been rejected three times, their patience had come to an end and was replaced by anger, also with the officers in charge at the Ministry. The Ministry sent a letter to the "sokn" council in 1882, where they in no uncertain terms were blamed for dragging their feet. Eventually the "sokn" council had to admit defeat, and in 1884, the preparations for a new church at Davik could start in earnest.

Villagers gave stones for the foundation wall without any compensation, and they also took part in the construction of the wall and the transportation of the building material. In May, 1885, the construction work itself was started, and about 20 men worked 12-hour days, finishing the exterior by Advent. The interior was completed during the winter months and the following spring. The new, big church was built next to the cruciform church which was not demolished until the new church had been completed. On the day of consecration, the bishop, deans and vicars and other church staff members first entered the old church. When they came out, the bishop led the way with the gold cross on his chest and the altar chalice in his right hand. Behind him came the Nordfjord clergymen in solemn procession. Members of the congregation lined the road and many elderly people cried openly when the church plate was taken out of the old church. 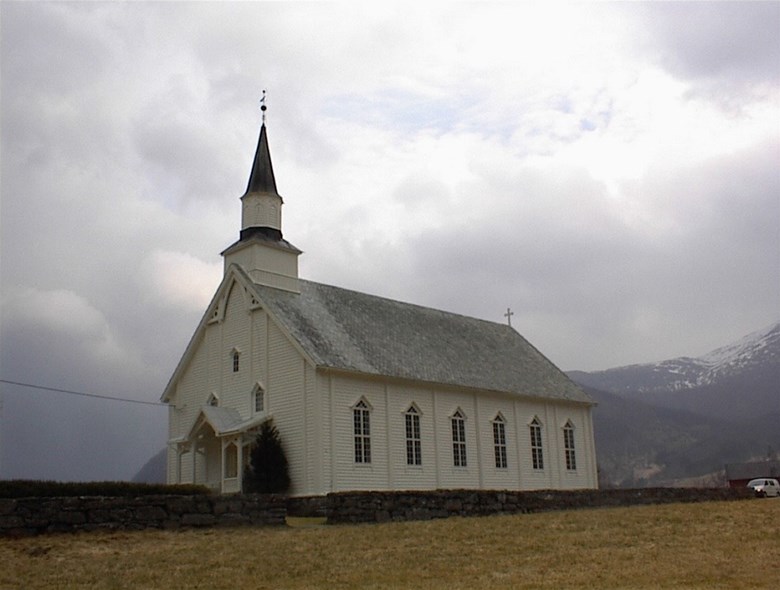 "Simple, but elegant in its simplicity" is one statement about the Davik church. It is easy to agree with this statement. The fine, white wooden walls and the old untreated pinewood floors give the church a natural, clean look. The cleaner lady in the church would very much have liked the floors to be varnished, because it is hard work to scrub the big floor areas, as well as scrubbing them thoroughly from time to time, which must be done on this type of floor.

The church itself is not particularly long, but it is unusually wide. Before the organ was installed in the gallery in 1933, the church could seat 700 people. Davik church is thus one of the biggest in the county. The chancel and the nave are partitioned only by a low balustrade, and have the same width as the porch. The square chancel has permanent benches along the side walls. The pew seats are painted blue, and otherwise oak-coloured with individual numbers for the various farms and families. The slanted ceiling in the nave and chancel are painted white, but towards the side walls of the nave, the ceiling is lowered and flat. The church room has columns supporting the gallery as well as functioning as roof supports to the sides. Along the walls there are five pointed-arch windows on either side, with green and red top sections. The altar rail is oval with a white-painted balustrade, similar to the low chancel partition. The usual vestries are located behind the chancel. On the western wall is the spacious porch with stairways on either side leading up to the gallery. In the corners of the porch there are small rooms with toilet facilities.

The steeple is placed on the roof ridge itself. The turret base is square, the steeple octagonal and the spire is covered with copper. The impression of an unusually big and fine church is strengthened precisely because of its wide west wall and the pure, elegant lines in the architecture. 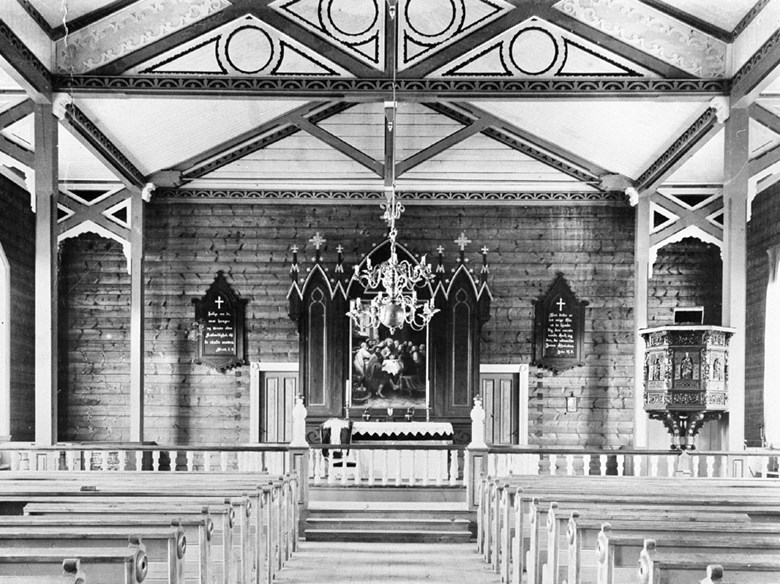 The altarpiece dating from 1885 is a painting by Anders Ohrem and Ole Marius Holmøe, with the motif of the "Holy Communion". On the altar there are two brass candlesticks from 1714-1716, a gift from the curate Fr. Holberg and others. The third altar candlestick has the inscription "Gift from the Davik Christian Youth Organization, 1915". On the altar there is also a copy of Frederik V's Bible, ninth edition, published in Copenhagen, 1760. The Holy Communion set consists of a chalice and paten, both in silver, and a pyx and a wine flagon in black crockery with a golden cross. 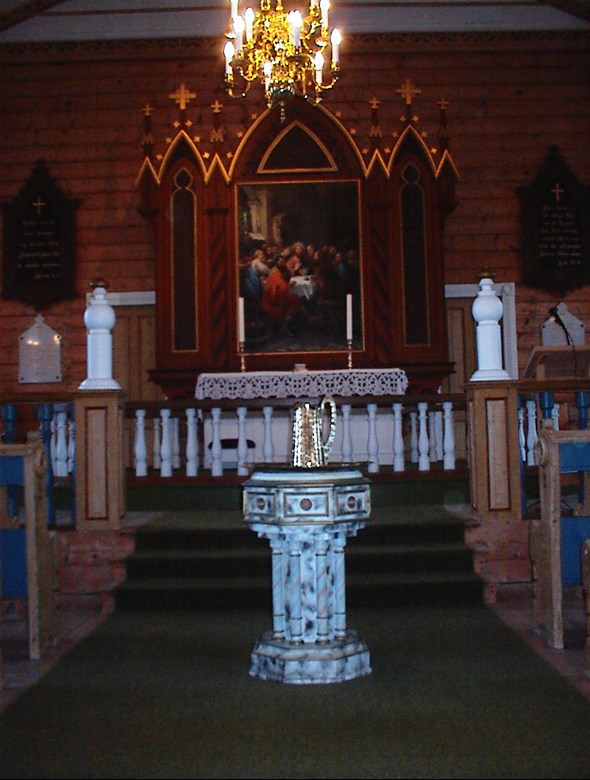 The font dates from 1886 and is made by Ole Marius Holmøe. The brass baptismal bowl probably dates from 1620 with a picture of the Virgin Mary, receiving the message that she was to become the mother of Jesus. It is marked with the letters C - V - G - E - M. Around the picture of Mary there are two inscriptions in old Gothic type. These have not yet been interpreted. The holy water brass ewer is a gift from Per Hamre who also made it.

The church has three chandeliers. The brass chandelier from 1752 has the inscription "This chandelier has been given to the Davik church by the vicar and the congregation in Davik "sokn" - In God's glory and to the adornment of the church - M.DCC.LII - 6 September". The two others are of a more recent date. One has the following inscription: "Gift from Marie and Alfred Myrvang 1954." On the newest is the inscription: "Gift from the vicar and the congregation 1955". The organ dates from 1933 and has 15 registers, made by "Vestre Orgelfabrikk". The church bell from 1885 is made by the German "der Bochumer Verein für Gußstahlfabrikation", with the inscription: "Glory to God in the highest - 1885". 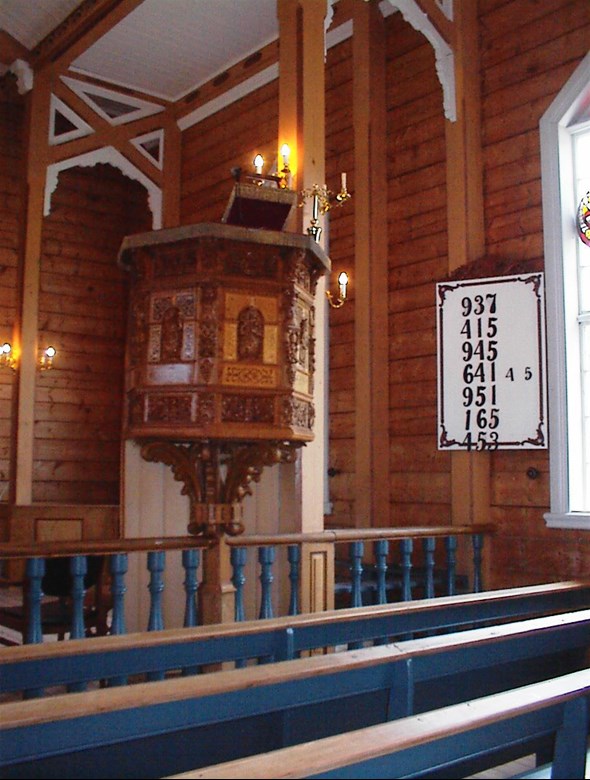 Chancel and nave have the same width, and are only divided by a simple, low partition on either side of the aisle. The 19th-century ideals of light churches both in terms of exterior and interior have been respectfully adhered to here.
Owner: Fylkesarkivet i Sogn og Fjordane, SFFf-90162.0005. - Date: Ca. 1900. - Photographer: C. Christensen Tomhav.
Fylkesarkivet i Sogn og Fjordane, SFFf-90162.0005.
Ca. 1900.
C. Christensen Tomhav.

The altarpiece is a painting by Anders Ohrem and framework made by Ole Marius Holmøe. The motif is the 'Holy Communion'. On the altar there are two brass candlesticks from 1714-1716. The font dating from 1886 is made by O. M. Holmøe. The brass baptismal bowl probably dates from 1620, whereas the holy water ewer is of a more recent date.
Owner: Bremanger kyrkjekontor. - Date: 2003. - Photographer: Knut Arne Vadøy.
Bremanger kyrkjekontor.
2003.
Knut Arne Vadøy.

The pew seats are painted blue, and otherwise painted in oak colour with individual numbers for the various farms and families. The walls are of wooden colour. The church room has columns supporting the gallery, also functioning as roof supports to the sides
Owner: Bremanger kyrkjekontor. - Date: 2003. - Photographer: Knut Arne Vadøy.
Bremanger kyrkjekontor.
2003.
Knut Arne Vadøy.