Midtgulen church is a wooden longchurch located at Kjelkenes, on the mainland part of the municipality of Bremanger. The church, with a seating capacity of 200, was consecrated on 3 May, 1904, by the bishop Johan Willoch Erichsen. The architect Lars Sølvberg from Utvik made the designs. Midtgulen church is a "sokn" church for the Midtgulen "sokn". The "sokn" was transferred from Bremanger to Davik parish in 1966. 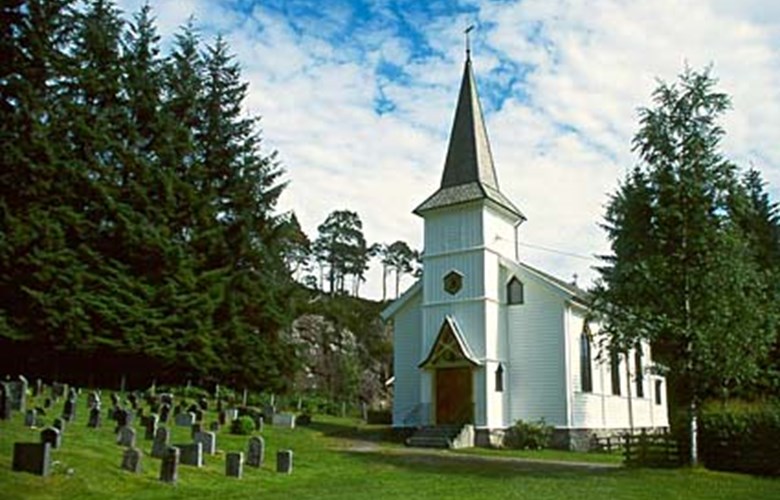 The fine church site has a sheltered location close to the bay of Hjellvika and a pine forest.

The old municipality of Bremanger comprised some areas around the Gulafjords, while the majority of people lived on the island of Bremangerlandet where the "sokn" church was located. The local people of Gulen promoted the church issue more in the form of a wish rather than a demand, and they discussed the matter more among themselves than with the vicar.

They realised full well what the vicar thought about the issue. The first vicar in the parish, Ulrik Koren, was not particularly enthusiastic about building a church at Kjelkenes, as this would imply crossing the sea of Frøysjøen in all kinds of weather. In his first period as vicar, when the church site was at Grotle, he had experienced scary sea crossings more than once. At the same time, one of the conditions implied in his work as a vicar on these islands was that if a church was erected in the district of Gulen (Midtgulen), he would have to serve there as well. In his diary notes he refers to the case. He did not believe that the congregation had any plans of building such a church. At any rate, no mention of it had been made to him during the ten years he had served as a vicar, and he thought it highly unlikely that there were any imminent plans either. The vicar on his part took no initiative to build more churches in the parish.

When the people of Gulen got an auxiliary graveyard in 1879, this was a step closer to getting their own church. In the early 1890s, the matter was formally put on the agenda for the local council. There was no discussion whatsoever concerning the location of the new church; it had to be next to the graveyard.

The people of Gulen got a fine and suitable church site close to the pine forest in the sheltered bay of Hjellvika. Various organisations and individuals joined forces to work and give gifts as the church was being built. The Gulen Rifle Club paid for the coloured window panes used in the church until the restoration work in 1954. The local youth organisation ¿Framover" donated money for the first organ, and the congregation raised money for the baptismal bowl, and other objects and furniture.

At first there were simple windows in the chancel, but for the 50th centenary celebration two stained-glass paintings were mounted, and also new windows elsewhere. The windows at the end of the nave also provide lighting for the gallery. The ceiling is octagonal and flat both in the chancel and the nave, but it slants towards the side walls. The architectural details are simple yet elegant. The small round altar rail has the same form as the gallery front. On either side of the walls carved dragon heads ¿swallow" the cross beams. There are also carved decorative elements between the brace beams and the walls. Some places in the church room have been decorated with gold-painted mouldings. A rather unusual architectural detail is the staircase leading up to the gallery at the northern end of the nave.

The colour scheme in the church is a consequence of the redecoration of the church in 1954. The main colours are green, brown, and faint yellow. In addition to maintenance and redecoration, the baptismal vestry was restored in 1991, at the same time as toilet facilities, a ¿coffin room", and a storage room for tools and equipment was built on the northern side of the church. The vicar¿s vestry is on the southern side, and this has not been changed since it was built. The exterior of the church was repainted in the summer of 2000, and was returned to its original white colour with brown window frames. The steeple is square and built a little into the very roof of the church. It is built like a tall turret base with a copper-covered spire.

The altarpiece entitled ¿Good Friday" is made by Frida Rusti (1861-1963) from Bergen. The painting portrays the crucified Jesus dead on the cross. The crying, kneeling woman to the left is probably Mary, the mother of Jesus. Behind her is a young man (perhaps John). Under the painting is the inscription: ¿Father, into thy hands I commend my spirit" (Luke, 23;46).

The wedding chairs from 1997 are made by Ottar Dahl from Kjelkenes. The vellum is tanned in the traditional way by craftsmen from Møre. The motifs of the stained-glass paintings from 1954 are ¿The good shepherd" and ¿The sower". Both the pulpit and the font date from 1904. The brass baptismal bowl has the inscription: ¿He that believeth and is baptized shall be saved" (Mark, 16;16). The holy water ewer dates from 1952 and is made in silver plate. It has the inscription: ¿Midtgulen church 1952". The votive ship model is a row boat with five pairs of oars and sail. The organ from 1929 has seven registers. The church bell from 1904 is made in Bochum, Germany.

It was a small but beautiful church that the people of Gulen eventually built. For centuries they had had to brave the weather-exposed crossing of Frøysjøen on their way to the church at Grotle and later on to Frøya. The wish for a church on the mainland was put forward at the same time as a new church site to replace the Grotle church was taken up for consideration. However, 50 more years would pass until their wish came true.
Owner: Bremanger kyrkjekontor. - Date: 2003. - Photographer: Knut Arne Vadøy.
Bremanger kyrkjekontor.
2003.
Knut Arne Vadøy.