The Vingen site is today the second biggest rock-carving field in Norway with some 2000 figures. Nevertheless, it was a stroke of good luck that made this place known to the outside world in 1912. 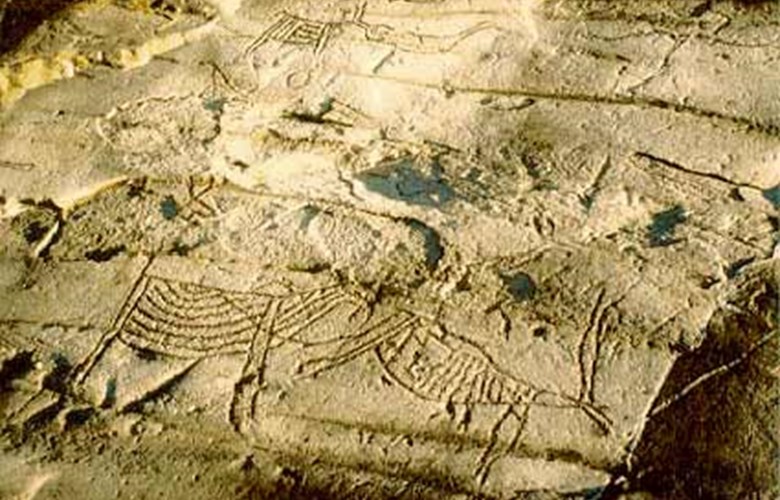 The motif material in the Vingen site is dominated by various deer figures. According to more recent interpretations, the deer may also have been a fertility symbol, or linked to notions of life, death and reincarnation.

It is highly likely that the people of Vingen had known about the rock carvings for a long time without making too much of an issue about it. This happened only when the lawyer Krisitan Bing in 1910 was told by Abraham Honnskår about "some animals carved in rock". Bing was in fact a keen mountain climber and Honnskår was his guide on the climb up the steep Hornelen mountain. Bing then contacted the owner of Vingen, Thue Gullaksen, who showed him even more figures. A short while afterwards, the photographer O. Espevoll was invited to the farm and 60 of the rock carvings were registered and documented.
In 1912, Bing published his finds, and thus the Vingen site opened up for archaeological studies. A comprehensive registration work was initiated and more and more figures have been uncovered. Out of the more than 2000 figures registered today in the Vingen site, about 1500 have been found in Vingen itself, whereas the remaining 500 are located on the Vingelven farm, in Fura and on the island of Hennøya.

For obvious reasons some of the rock carvings had been covered with vegetation throughout the centuries. A case in point is the so-called Swedish turnip rock. As the name suggests, the soil on this rock was used to cultivate swedes. As there were too many people and too little soil, every available piece of land had to be taken into use. A long while after the last swede was harvested, some figures were found on the rock, but the rock was marked by the digging of spades. Consequently, the Swedish turnip rock is marked both by Stone Age art as well as more recent agricultural activities. There are probably still many undiscovered rock carvings in this area, both under the turf and elsewhere.

Parallel to the extent of the find, people have also tried to imagine what the society was like that created such carvings. The abundant material of motifs makes Vingen a key area in Norwegian and Scandinavian rock-art research. According to the experts, these figures may have been created over a time span of two thousand years, from about 3-4000 years B.C. The motif material is dominated by various deer figures, but there are also examples of carvings that may represent snakes and dogs, in addition to some figures of people of both sexes. Besides, there is also a group of abstract representations, with some resembling weapons or tools, whereas others cannot be categorized in any way. It is above all the most recent carvings that have an abstract form.

What are the rock carvings meant to represent?

What was the purpose of the Vingen rock carvings? Can they reveal anything of the times when they were made? The fact that the deer motifs are so predominant has been a key element in these interpretations. According to the oldest interpretation, these figures represent a hunting magic where it was thought that they would enhance their chances of a better hunting result. This interpretation is partly based on the fact that the Stone Age society was a hunters' society where the deer was an important prey. Recent historical records from Vingen corroborate this line of thought because as late as in the second half of the 19th century, one method of killing deer was to chase them off cliffs.
On the other hand, more recent interpretations put less emphasis on hunting magic, but are more inclined to look upon Vingen as a ceremonial site. One could, for example, imagine that the site was used to mark the transition from childhood to adulthood, or in connection with other no longer existing types of ceremonies. One suggestion that has been put forward is that the deer represented something more to the Stone Age people than simply as a source of food. According to these interpretations, the deer may have been a fertility symbol, or could possibly have been linked to notions of life, death, and reincarnation. This idea of a fertility cult is also supported by a large number of woman figures and various carvings that may be interpreted as female sexual organs.

A meeting place and a cult site

The rock artists themselves have left no clues for future generations, and more interpretations are likely to follow. What all these interpretations have in common, however, is that they envisage Vingen as a major meeting place. Based on the chase hunt of deer, we know that this is a type of hunting method that demands a comprehensive organization. Many persons were needed to form lines and chase the animals over a large mountain area, at the same time as many people were needed to be ready to kill the deer when they came tumbling down the mountainside. Even if this can be looked upon as a rather brutal way of hunting seen with more modern eyes, it was, nevertheless, a very efficient way of getting meat. The meat was undoubtedly a welcome addition to their diet which was more or less based on fish. When so many people were gathered in one place, it is a fair assumption that this also implied festivities according to the worldly and religious norms of the times, as well as a chance for people of marriageable age to get acquainted.

In 1980, the Vingen Landscape Preservation Area was established. It covers an area of 5000 decares (about 1250 acres), comprising in addition to the whole area of Vingen, also parts of the neighbouring farm of Vingelven. Various measures have been implemented to protect the rock carvings against natural and man-made influence. Since 1996, the area has been integrated in the national rock-art project of the Directorate for Cultural Heritage.