Stedje church is a so-called longchurch (basilica type), built of wood and located at "Øvre Stedje" in the municipality of Sogndal. The church has a seating capacity of 600, and it was consecrated on 17 December, 1867 by bishop Peder Hersleb Graah Birkeland. The architect Eilert Christian Brodtkorp Christie designed the church. Stedje church is a "sokn" church for Stedje "sokn" and it is the main church in the Sogndal parish. 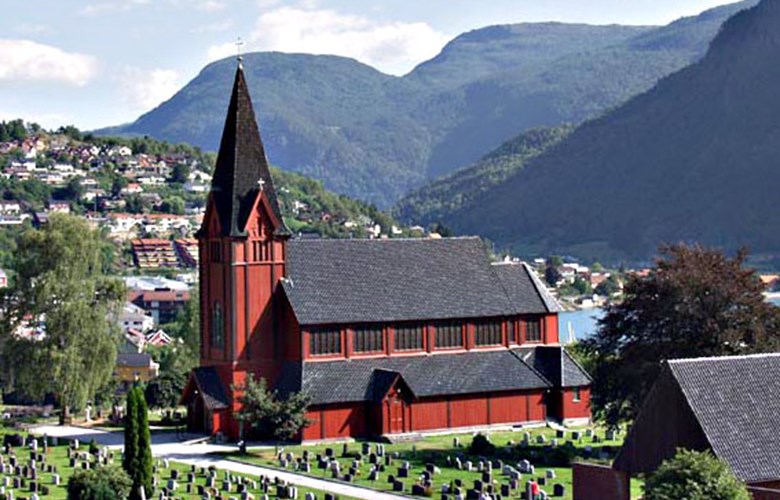 The church stands on the same site as the old stave church. The church site is a terrace on the west side of the valley.

St Olaf himself is said to have been standing there to mark the future site of the church. The runic stone at Stedje is just one of the testimonies that Stedje is one of the oldest church sites in Sogn. In the Middle Ages the church was the biggest in Sogndal and it also had a status as a main church or county church. The first reference to the church is found in the Sverre saga in connection with Sverre's punishment of the inhabitants of Sogndal in 1184. The church was at the same site as the present church. The church site is a terrace on the west side of the valley.

The present church at Stedje was erected during the building boom in this country in the latter part of the 19th century. It is one of the most monumental churches in the county. The three-naved church is evidently inspired by the stave church style. When you enter the church, the most conspicuous feature is the glass mosaic in the inner walls high up in the chancel. The windows were inserted in 1943, in connection with a major restoration work that lasted until 1950. The windows to the north and south show the four evangelists, whereas the window on the east wall shows the crucifixion, Mary and John. Both these pictures and the glass mosaic in the vestries are signed "Studio J. Rognaldsen", Bergen. All the pictures are composed of three sections in width and concluded by a clover-leaf form at the top.

The chancel has high walls, and it is built with a central room as in the church nave. In the chancel the central nave is supported by eight columns, and with steep sloping walls out to the sides of the lower walls. The high inner walls are marked by a dado under the windows. In the church room itself, the central nave is separated from the side aisles by six columns. Up along the walls there are windows with small-paned coloured glass in leads.

The municipal council of Sogndal had resolved that an octagonal church should be built at Stedje to replace the stave church. The commissioner made a deadline for the building project, and when the building master and the church architect Johannes A. Øvsthus failed to keep it, he was dismissed from the project. On the advice from the vicar Dahl in Lærdal, a request was sent to architect Christie in Christiania (Oslo). He accepted the commission.

Now the old and small stave church would be replaced by a new church that could accommodate many more churchgoers. The architect and the local council agreed that the new church would have a seating capacity of 700, and it would be built in the same style as the planned church at Lærdal. Christie both designed the church and made arrangements that it would be prefabricated in the capital. The materials were loaded on ships and transported to Sogn in the summer of 1867. A total of five ships came with materials for the three churches at Sogndal, Borgund, and Årdal. In a matter of a few months the new, big church at Stedje was completed.

About 3000 persons attended the solemn consecration on 17 December, 1867. Now they had got a much more spacious, lighter and more elegant church than the previous one. However, for many people this was an event that was also tinged with sadness. The old stave church was mainly torn down because it was too small, not because it was on the point of collapsing. Elderly people in the village thought it would have been a better solution to extend the old church instead. 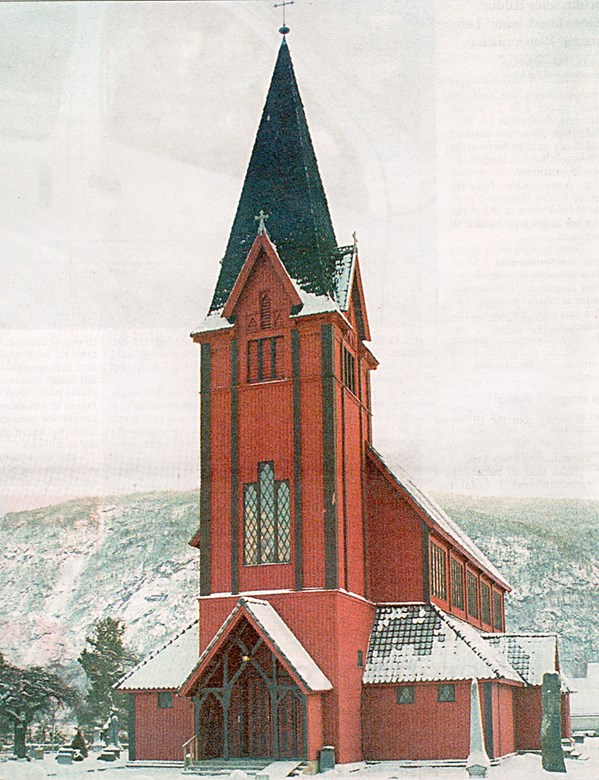 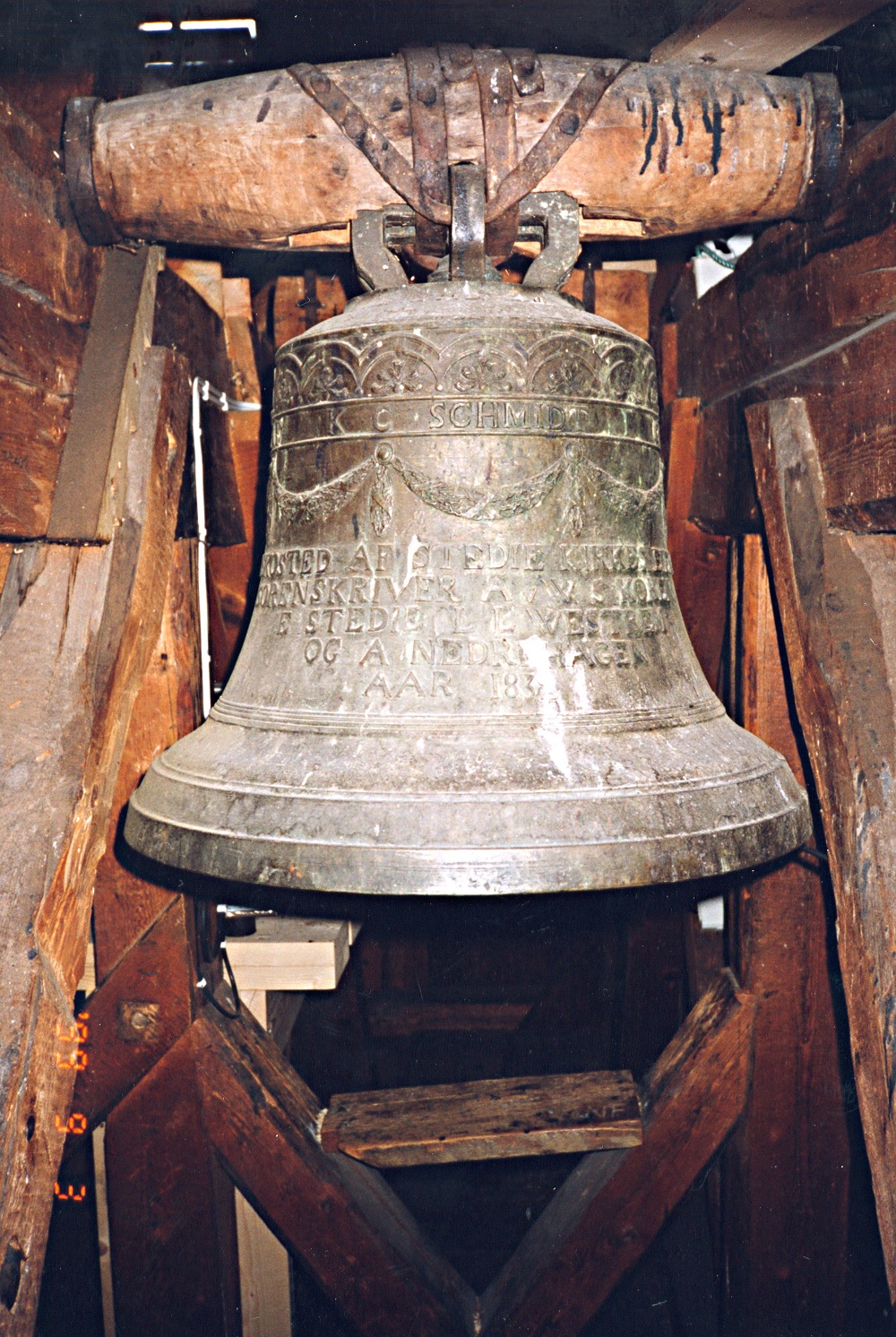 Stedje church cost 6634 "speciedaler", close to 2000 speciedaler more than what was budgeted. In order to honour the regular instalments, a special church tax was levied on all the farms, whereas crofters and sea crofters had to pay a smaller sum. Glazed roof tiles from the Netherlands were one of the budget items that led to the extra expenditure.

In 1899, wood stoves were installed, and a decade later the gallery was extended to make room for the new organ that the village people had raised money for. The organ was taken into use in 1911. After a while new doors were made along the side walls, and a solid stairway was built up to the gallery. In 1929, electric lighting was installed, and a new chandelier was put up in the chancel. At the same time, the interior of the church was panelled and painted, and double-glazing windows installed with coloured small panes. All these alterations made the interior of the church much lighter and warmer.

In connection with the centenary of the church in 1967, another major interior restoration and redecoration was carried out. At the same time, the old font made of soapstone was taken into use again.

On the altar there are two high brass candlesticks with a base of three balls. They have an inscription, showing that the vicar Peder Pedersen Skütte and his wife, Anna Nielsdatter, gave these to Stedje church. Skütte was vicar in Sogndal from 1610 to 1637. In addition, there are two smaller candlesticks made of brass. The altar set consists of a silver chalice from 1680 with an inscription; a silver paten, probably from before 1700; a pyx and a wine flagon made of black ceramics. 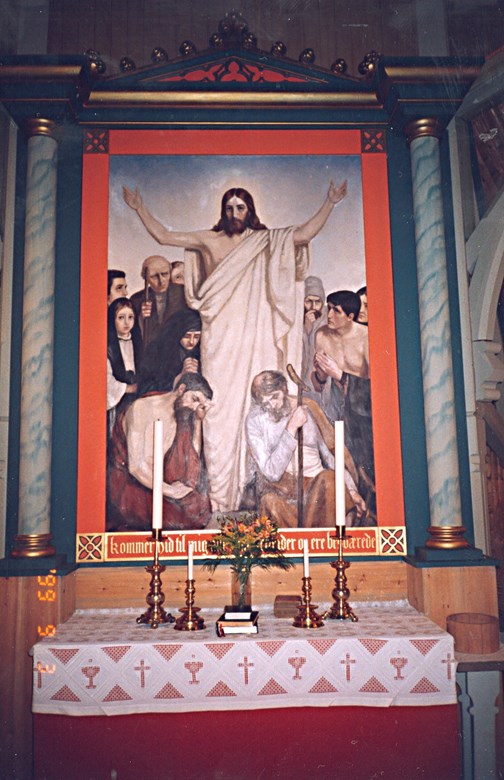 The square font from the Middle Ages is made of soapstone. The baptismal bowl and the holy water ewer are made of brass. The painting "Jesus and the children" from 1979 is made by H. Brusdal, and hangs on the north wall of the chancel. The brass chandelier dates from 1672. The organ dates from 1967 and has 30 registers. It was made by "Vestlandske Orgelfabrikk".

From 1867 the church had a Christ figure, made by the sculptor Brynjulv Bergslien from Voss, but as early as 1890, a decision was made to get an altarpiece. The crucifix now hangs on the northern column in the chancel. The altarpiece from 1891 is a copy of the painting 'Christus Conselator' by Carl Bloch (1834-90). The inscription refers to this with the quote from Matthew 11,28: 'Come unto me, all ye that labour and are heavy laden, and I will give you rest'. It is believed that it is either Cecilie Dahl (1858- 1943) or Christen Brun who has made the copy. The frame has two columns. When you compare the three altarpieces of Sogndal, Eid and Naustdal, which are all copies of the same painting, the different frames make for a different impression of the picture.
Owner: Sogndal kyrkjekontor. - Date: 1999. - Photographer: Fotgraf: Ukjend.
Sogndal kyrkjekontor.
1999.
Fotgraf: Ukjend.

There are three church bells in all. The biggest bell dates from before 1400, and it is one of the biggest in the country, weighing as much as 1100 kilos, measuring 76 centimetres in height and with a diameter of 94 centimetres. The bell is decorated with a picture of Mary and the Infant, and has an inscription in Latin. The smallest bell dates from 1584, without any inscription. The picture shows the medium-sized bell dates from 1832, and this has an inscription which tells us who has paid for the bell and where it as cast. Dating: 1999. Owner: Sogndal kyrkjekontor. Photographer: Unknown.
Owner: Sogndal kyrkjekontor. - Date: 1999. - Photographer: Fotgraf: Ukjend.
Sogndal kyrkjekontor.
1999.
Fotgraf: Ukjend.
resources:
Aaraas, Margrethe Henden m.fl.: På kyrkjeferd i Sogn og Fjordane - 2. Sogn. Selja Forlag. Førde 2000.