Flåm is one of the most popular tourist destinations in the county of Sogn og Fjordane. The main reason is the Flåm Railway which winds its way up the valley of Flåmsdalen to Myrdal. Down by the quay is the railway station and a stone's throw away lies Fretheim Hotel. The hotel was established about 1890 when English tourists came to fish salmon in the Flåmselvi river. 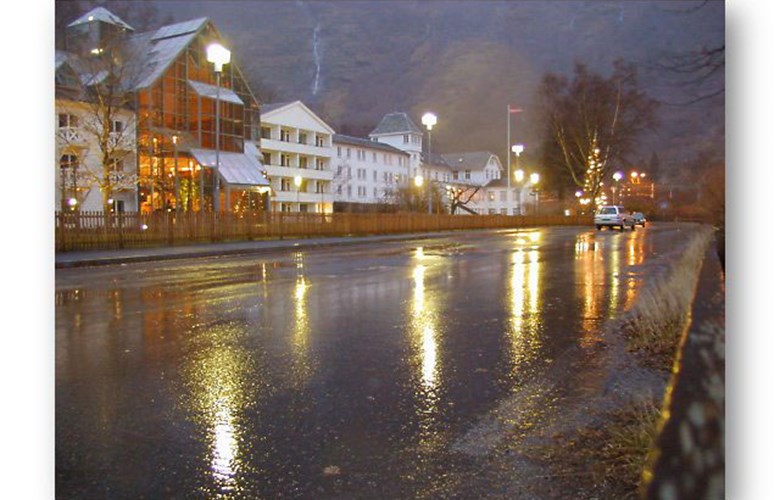 A rainy day in Flåm. Fretheim hotel is now a modern hotel with a high international standard. The new wing from 2000 can be seen to the left in the picture with the new tower built in glass and steel.

About 1860, the first English anglers came to Flåm to fish salmon in the river. Many of them then stayed at the farm "Nedre Fretheim". Christen Fretheim (1848-1916) owned this farm and was said to be the richest man in the village at that time. He was a giant of a man and a very enterprising man. About 1870, Fretheim started to accommodate guests on his farm, but it was not until about 1890 that we can talk about a hotel operation. On the farm there were two residences not too far apart. These two houses were joined shortly after 1900 to become Fretheim hotel.

In 1878, a quay was built at Fretheim to serve the steamers of the local steamship company "Fylkesbaatane", and in 1882, Christen Fretheim was employed as its first shipping agent. When the Flåm sub-post office was established in 1890, Christen Fretheim became the first manager.
In the 1890s, the tourist traffic through the valley of Flåmsdalen increased considerably. In connection with the construction work of the Bergen Railway between 1894 and 1909, the road up the valley became an important transportation route. At an early stage, Fretheim started up a transport business by horse and cart from Fretheim hotel up to the railway station at Myrdal. When the Bergen-Oslo Railway was opened for traffic in 1909, this transportation business became even more important. Travellers came by boat to Flåm and needed transport up to the railway station at Myrdal. Those who came by train, needed to be taken down to Flåm, some to continue their journey by the local steamer, whereas others chose to stay overnight at the hotel.

Tourists, steamship quay, post office and railway were all important elements that formed the basis for the establishment of Fretheim hotel.
Christen Fretheim died in 1916, and the running of the hotel was taken over by his cousin, Marthe Fretheim. In spite of the First World War and the hard inter-war years, the Fretheim hotel experienced a healthy growth both in terms of number of tourists and economy. Marthe Fretheim was referred to as an especially friendly and skilled hotel hostess and she made the hotel famous. When she died in 1933, Astrid Fretheim and her brother Atle took over the hotel, basing their operation on the work and traditions that Marthe had developed.

The Flåm Railway and a deep-water quay

In 1940, yet another important addition to tourism came to Flåm when the Flåm Railway was opened for traffic. This railway line has gradually become a major tourist attraction. The steep, 20-kilometre-long line with 20 tunnels provides travellers with breathtaking views. Fretheim hotel is located close to the terminal of the Flåm Railway on the quay at Flåm, and the hotel has naturally benefited much from this central location.
Every year a number of cruise liners come to Flåm. In May 1999, a new big deep-water quay was opened, which meant that the cruise liners could dock at Flåm. Up until then, the cruise liners had to anchor up out on the fjord and use tenders to convey people ashore.

Fretheim hotel has carried out a number of extensions and modernizations since the time the two farm residences were joined together. In 2000, another major modernization and extension project was carried out, which means that the hotel now has 120 rooms. The hotel is now a quality hotel with an international standard. The hotel has seven panorama suites of a very high standard, all with an excellent view of the fjord. The fjord view can also be enjoyed from the balconies of some of the other hotel rooms, as well as from the new tower.
The hotel also has a big and light restaurant, a bar on the second floor and a pub in the basement. By the lobby and the reception there is a souvenir shop, and also a hairdresser.

In addition, Fretheim hotel offers course and conference programmes and facilities. The hotel has their own conference hosts that help with the planning and implementation of the events.
During their stay at the hotel, guests can experience various types of adventure tours and activities. A return trip on the Flåm Railway is a must, and there are many different boat trips to choose among. One boat trip takes you to Undredal where you can taste the local goat cheese, before continuing into the spectacular Nærøyfjord to Gudvangen. Some guests might be interested in biking or hiking trips on the popular "Rallarvegen" (the Navvy's Road). For the more hardy outdoor enthusiasts, the hotel can offer a "Wilderness camp" and canyoning.

Christen Fretheim (1848-1916) started the hotel operation on the farm Fretheim in the late 19th century. English anglers and an increasing number of tourists were the most important reasons why the hotel was established..
Owner: Fretheim hotell. - Date: Ukjend. - Photographer: Ukjend.
Fretheim hotell.
Ukjend.
Ukjend.