The mountain farms at Lidal

The isolated farm of Lidal is situated down towards the sea on the east side of the Fjærlandsfjord. A narrow and steep valley leads up to the more open north-south valley of Breisetedalen. Previously there were five farms which had had mountain farms from days of old. 1965 was the last year there was any activity at Røysete, the main mountain farm, also known as "heimestølen" (the home mountain farm). Bjørg Lidal Skeide was one of the last milkmaids. 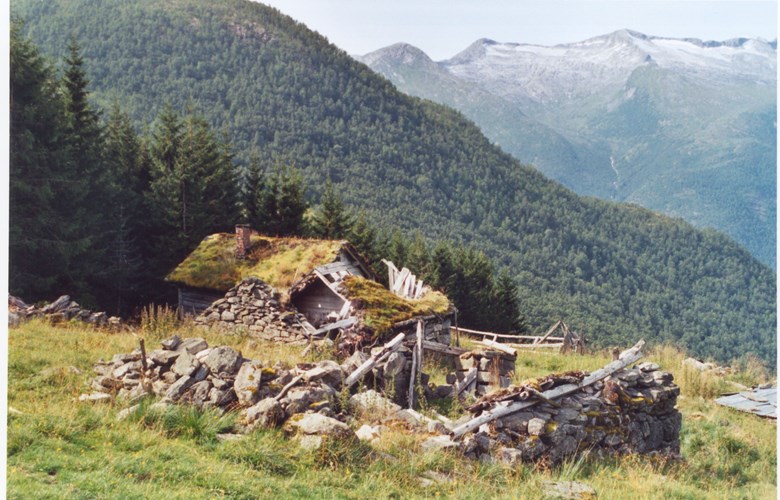 View from the east down towards Lidal and the Fjærlandsfjord. Røysete is located in the upper part of Lidal where there is a valley towards Romedal to the south, and another valley upwards towards Kvanndalen.

Holding no. 3 (Perane), no. 1 (Tråingane) and no. 5 (Dalingane), had a common mountain farm ("heimestøl") which was in use from about 10 June, depending upon the spring conditions. Holding no. 1 had a "vårstøl" (spring mountain farm) used in spring and autumn. From this place they could carry the milk home morning and evening.

The main mountain farm ("heimestølen"), was Røysete with grazing in the valleys of Kvanndalen and Breisetedalen. In the latter valley, Breisetedalen, there were two high-altitude mountain farms, Breisete and Myrsete. These two farms lay close together. At Breisete there were dairy activities from about 1912 to about 1960. There was no such activity at Myrsete after 1962, and at Røysete there were no activities after the summer of 1965.

Bjørg Lidal Skeide, born 1941, was milkmaid at the mountain farms in Lidal until the activities ended in 1965. The following is her account of the work with making cheese and churning butter.

Putting on the cheese kettle

Once a week it was time for making cheese and churning. Then we spent the whole day up at the mountain farm. Normally we walked down home every day apart from Sunday. Occasionally we made cheese twice a week. In the morning we had to fill the cheese kettle quite full and light a fire under before taking care of the morning milking chores. Then most of the milk had boiled enough when we had finished separating the milk and washing and cleaning the utensils. The cows had been let out and the cowshed cleaned as well.

First we had to make ¿gamalost" (literally old cheese). The sour milk had boiled and the cheese fallen down to the bottom of the kettle. Then we had to ladle the whey into a narrow wooden box and put the cheese into wooden boxes. These boxes were of different sizes. We put woollen cloths in the bottom of the boxes which had holes so the whey could run out. Then we let the cheese ¿rest" for a few days until the cheese got a firm consistency. Then the cheese was overturned and left to mature while we turned it from time to time. The cheese was kept on a shelf above the open fire to be smoked and dried properly. Then it was time to wash and scrub the kettle to make it as spotlessly clean as possible.

When this work was completed, it felt good to sit down and relax for a while. We had a meal which often consisted of "raw cheese" (was taken out before the whey and cheese separated). We had sour milk, raw cheese, a little sour cream and sugar. It tasted very good.
The day was still young - the morning chore and meal usually finished about ten.

The churning of butter

Afterwards we had to start the churning. The sour cream was put into the churn which stood on a stool, and then we started on the butter-making process.
Some times this did not take long, but at other times things went more slowly. We took out the tap at the top of the churn to let in air, but also to be able to keep an eye on the sour cream. Suddenly the sour cream separated into butter and buttermilk. The buttermilk was poured into a bowl, and the butter was first put in water. After kneading the butter, we put it into a wooden box. Then we salted the butter, and in the afternoon, we kneaded it once more and put it into another wooden box which had been carefully scrubbed and washed.

Bjørg Lidal Skeide was milkmaid at Røyset for the last few years the mountain farm was in use. Nearly forty years later, the situation for the mountain farms of Røyset, Myrsete and Breisete is the same as for so many others in Sogn. We find sites with foundation walls, stone wall fences, open fields, derelict houses and cowsheds, the occasional utility article, but we also find examples of well-maintained houses or even new houses. The mountain farms represent outlying areas, still rich in traces of days gone by.

At Røysete there are two houses under roof, several others where the roof has broken down, five-six foundation stone walls, stone wall fences, and a substantial number of utility articles here and there. This is indeed a miniature cultural landscape of historical interest which speaks and remains silent at the same time.