Beitelen is one of the most famous landmarks in the Nærøyfjorden World Heritage area. The characteristic mountain top offers an excellent view of the fjord system. 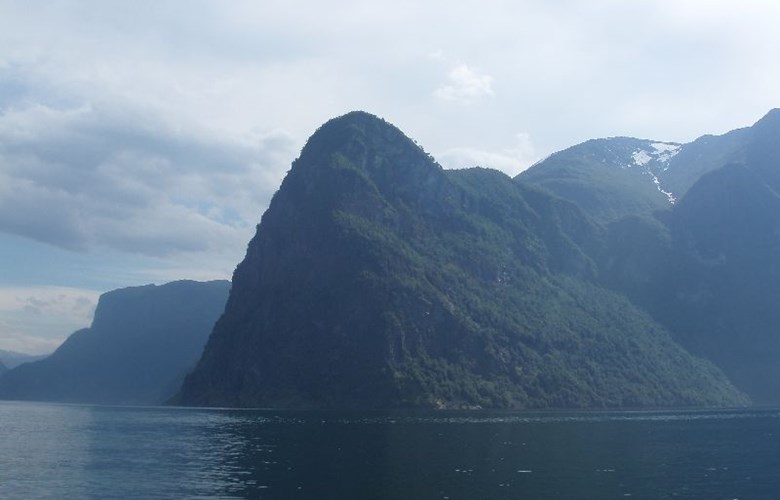 Beitelen dominates the entrance portal to the Aurlandsfjord and the Nærøyfjord.

A portal in the fjord system
Beitelen rises to an altitude of 675 metres, forming a dramatic entrance portal both to the Aurlandsfjord and the Nærøyfjord. At Beitelen we find one of the best stands of deciduous trees with linden (lime tree). At this locality we also find the grass species drooping wood reed (Cinna latifolia) which is usually found further to the east.

The place name of Beitelen
According to the local historian Johs. B. Thue, the word "beitel" comes from the Old Norse noun for chisel. A "beitel" is in fact also the Dutch word for this tool. Thue's interpretation is that this somewhat slanted mountain can be compared to the chisel as a wedge-like tool, used to form the raw material. Thus the place name can have its origin in myths and popular beliefs dealing with way the landscape was formed by supernatural forces.

The hike up to the viewpoint
The trail up to Beitelen goes up by way of the high farm of Stigen, located at 350 metres above the fjord level. The trail up from the fjord is very steep, but safe. The farm was settled from the Black Death until the 1960s when people left the farm. In the 1990s the present owner bought one of the holdings and put the farm in working order. Today the farm is operated in the summer months with facilities for meals and accommodation.

Fishing at Beitelen
In the fjord below Beitelen it was common to use longline to fish torsk and ling, especially in the 1920s and 1930s. The longline from Beitelen could be placed in many directions out into the fjord.

It occasionally happened that more unusual species were caught during this traditional fishery. Erlend Vinjum writes about a case when a basking shark had become entangled in a herring net. The basking shark can become huge and this one weighed about two tonnes. Even if liver from basking shark is a valuable commodity, the basking shark was lifted up onto the steamer "Stavenes", and then sunk in the fjord at Beitelen.