The history of the village of Gudvangen starts about 1800. In that year the innkeeper of Arnehus at Dyrdal, Jens Knutsen Kappadal, moved to Gudvangen. The traffic on the Nærøyfjord increased from the mid-17th century when the national royal postal road by way of Lærdal, Gudvangen and Voss was established. It was a long distance to row from Lærdal to Gudvangen, and for this reason the inn at Arnehus was established. 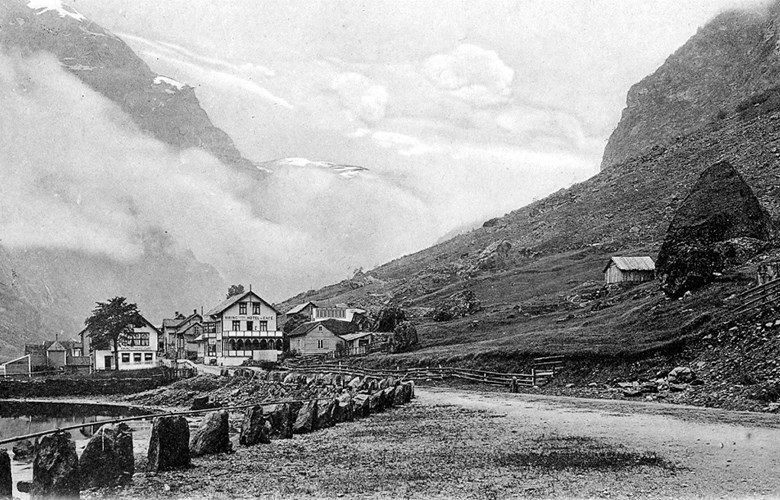 Vikingvang Hotel to the right and the Annexe to the left. In the foreground a parking space for horses and carts in connection with the conveyance of tourists from the cruise liners.

Jens Knutsen moved two old houses, called court houses, from Arnehus to Gudvangen. In these two houses court sessions had been held, where tax collector, district recorder and farmers met to resolve important issues. Jens Knutsen probably used these two houses for serving food and provide accommodation for travellers.
In 1827, Jakob Rosenwinge Ringkjøb, born in the county of Nordland, came to the place. However, Jakob died shortly afterwards in 1832, and in 1841, his widow remarried Jens Fynboe Wilman, from Orkdal in Trøndelag. Now newer and bigger houses were built, and this family ran the place until the 1860s.

In 1869, Johan Daniel Schultz from Askøy and his wife Kristine Margrete Larsen from Aurland came to the place. The couple used a big building to the west of the quay as a hotel and called the hotel Schultz Hotel. This building along with others were taken down and moved away a few years later.

In 1879, the place changed owners once more. Ole Knutsen Helland from Lærdal and his wife, Brita Kristoffersdotter Torsnes from Balestrand bought the inn. They built a new hotel on the west side of the road towards the quay and called it Hellands Hotel. However, Ole Knutsen died already in 1882, and Brita ran the hotel as a widow for a number of years. On the opposite side of the road were the two old court houses which had now been joined into one building. In this house Brita ran a general store, but she did not make any profit and it all ended with bankruptcy and auction. 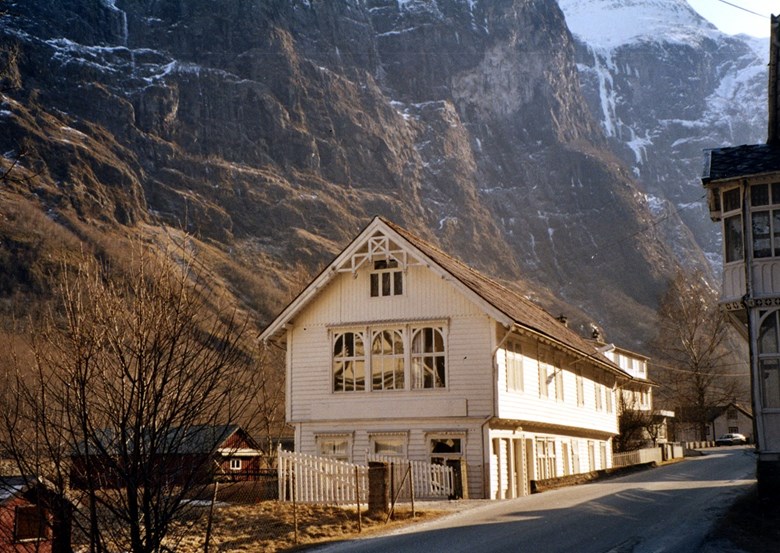 In 1891, Alfred Barclay Meidel came to the hotel. He had earlier sailed as a pilot in foreign trade, but now he came from Oddadalen Turisthotel. About 1895, he built an addition to the hotel with a big dining room to the south, and the main entrance was moved from the east side to the north side of the building. Now the name was changed to Vikingvang Hotel. The two court houses on the other side of the road - now one building - called the Annexe, also belonged to the hotel property. The roof was lifted to make room for full height on the second floor, and the dormer in the middle of the house was removed.

In 1899, yet another change of ownership took place when Christian Dinger took over the running of the hotel. He came from Freiburg in Germany and was manager at Stalheim Hotel from 1897 to about 1911. It is not likely that he himself worked at the hotel at Gudvangen as the Stalheim was a big tourist hotel with much traffic and many guests during these years. 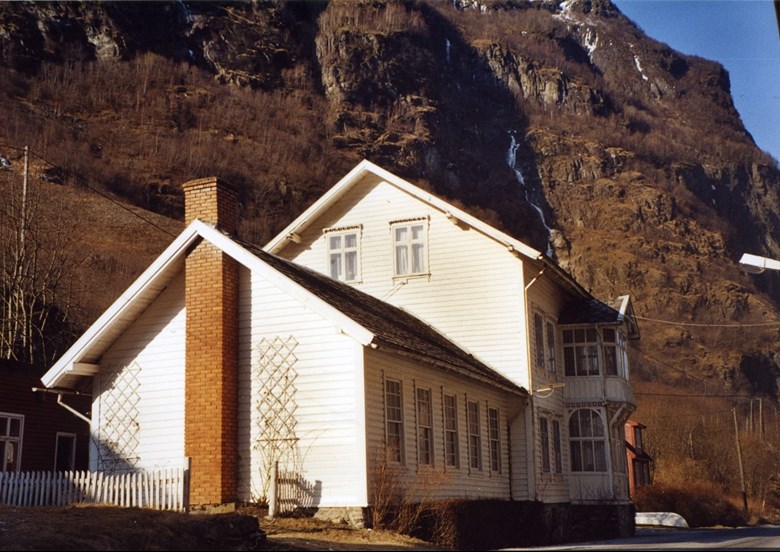 The hotel building became a residence

The Annexe. This was originally two court houses that in the early 19th century had been moved to Gudvangen and joined into one building. The serving of food and accommodation started in this house.
Owner: Aurland kommune - Date: 2006. - Photographer: Åsmund Ohnstad.
Aurland kommune
2006.
Åsmund Ohnstad.
resources:
Ohnstad, Åsmund: Manus til gardssoge for Undredal og Nærøy. 2006.Ohnstad, Anders:Bygdebok for Aurland. Bind 1, 1960.