Askvoll during the Viking Period

Askvoll is centrally located on the sea lane, and in the surrounding area several sea battles were fought during the Viking Period. The Norse saga literature gives more information. 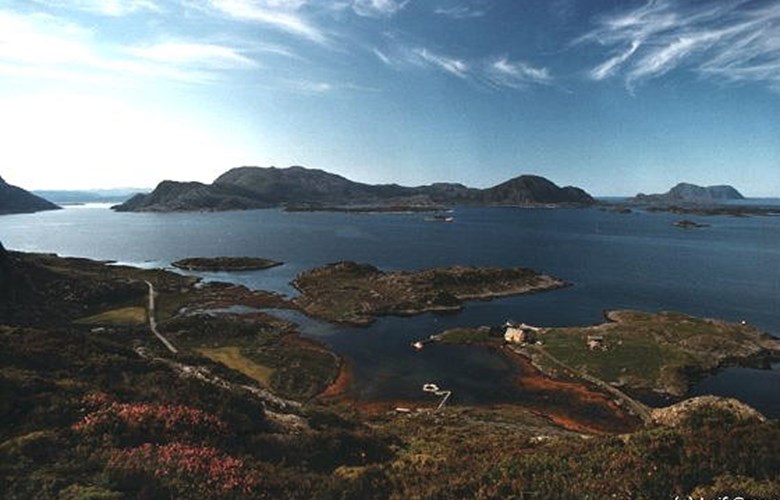 Alden and the northern part of Atløy seen from the point of Staveneset. On the sea there earl Håkon fell, while his opponent earl Atle received his death wound.

The battle in the bay of Stavenesvåg

Near the rock carvings at the point of Staveneset, there are a number of old burial mounds. They may date back to the Viking Period, when, according to the saga, there was a battle in the bay of Stavenesvågen a short distance further west. According to Snorri Sturluson's saga of kings called Heimskringla, the earl Håkon, King Harald Hårfagre's (Fairhair's) ally, and the earl Atle fought for supremacy over the area which later became the county of Sogn og Fjordane. In this battle Håkon (Grjotgardsson) fell, and Atle was injured and died later at Atløy. According to the scald Øyvind Skaldespille, the fighting was furious.:
"And the bay was all mixed red with the blood of men, the honourable, who tumbled around the son of Grjotgard in the great fight at Stavenes."

Atle is believed to have been buried at Atløy after the battle, and this may be the origin of the name of the island. The later king Eirik Blodøks (Bloodaxe) is believed to have had an estate there, and according to the Egil saga, the scald Egil Skallagrimson once visited at a feast while the king was sacrificing to the Norse gods. Large quantities of beer were consumed, and Egil began to perform mocking songs. He got into a fight with one the king's men, Atløy-Bård, who tried to put poison into his beer, but Egil killed him with his sword. Egil had to escape, but could not find a boat. He therefore swam across to a smaller island, with his spear, sword, and helmet on his back.

It could have been the straits of Sauesundet that Egil Skallagrimson swam across in order to hide. This narrow sound, at any rate, was the scene of another sea battle later in the Viking Period. Snorri's saga of kings gives an account of how the king Olaf den heilage (later Saint Olaf) lay in ambush at Saudungssund, in order to attack the earl Håkon. They placed one ship on each side of the sound, with a solid rope between them. When the earl arrived at the sound in his longship, he thought they were two commercial vessels, and let his men go forward between them. Then king Olaf and his men pulled the rope under the keel of the longship and pulled it up. The moment the rope caught the longship, the stern went up in the air and fell forward on its nose, so that the sea rushed into the stem and capsized it. King Olaf picked up Håkon earl and some of his men, while others were killed or drowned. The earl had to swear that he would never again oppose the king, and that he would leave the country. He then had his ship back, and they went their separate ways.

Sauesund is known from the early Middle Ages. It is believed that a battle was fought in this sound between earl Håkon and King Olaf (Saint Olaf) den heilage, in 1014.
Owner: Leif Grane. - Date: 2000. - Photographer: Leif Grane.
Leif Grane.
2000.
Leif Grane.