Flåm church is a wooden longchurch from 1670. The church has a seating capacity of 160 and was built by the master builder Magne Essen. This church replaced another church that was torn down in 1670. This was most likely a stave church standing approximately on the same site as the present church. Flåm church is today a "sokn" (sub-parish) church for the Flåm "sokn" in the Aurland parish. 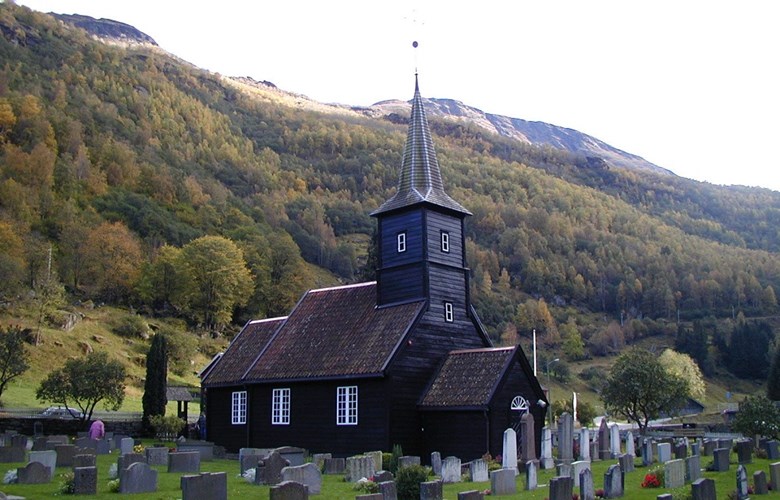 The church is located on the farm Flåm

The church site at Flåm is close to the river, near the old Flåm farmyard. Flåm church is a small and intimate church, very similar to the other 17th-century churches in the county. The church has horizontal, brown-painted panelling. On either long side there are three windows, two in the nave and one in the chancel. The church tower stands above the western end of the nave, whereas a porch has been added towards the west. In addition to the main entrance through the porch to the west, there is also a door on the south wall of the chancel.
1667 is frequently mentioned as the date of the church construction, but recent research has shown that it was erected in 1670. The local historian Svein Indrelid is of the opinion that the master builder Magne Essen broke the agreement with the deanery secretary and built a new church at Fretheim in 1668 instead of at Flåm. However, when this church was taken by a storm the following year, the new church was erected in 1670 on the agreed site on the Flåm farm, close to the old stave church that was torn down the same year. 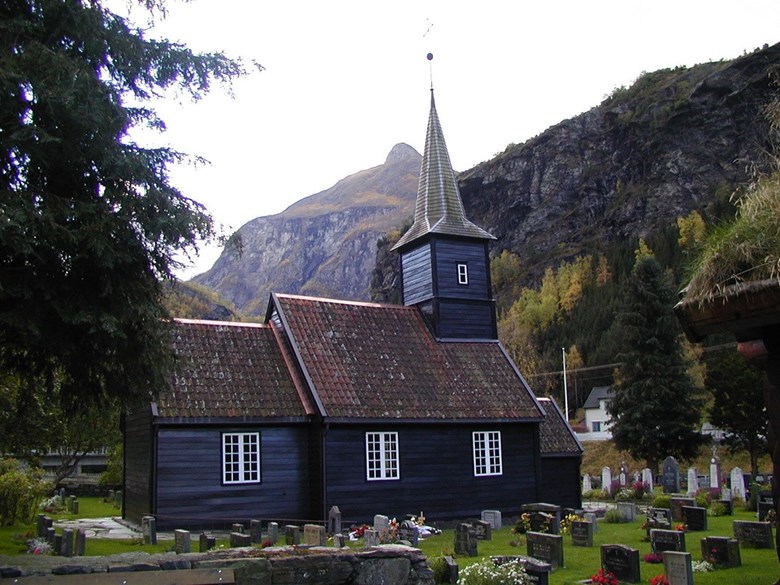 In the following years the church was improved, for example with a new porch in 1680. A few years later, in 1686, the church was referred to as a log construction with church tower and porch, with a nave measuring 8.7 times 7.2 metres, with a square chancel measuring 5.4 metres on all sides, and a square porch measuring 3 metres on all sides. The church was otherwise in good repair, and the inspection report reveals that the interior was richly decorated.
The exterior of the church was tarred at first, but in the years 1828-30 it was painted white, and all the lively decorations inside were painted over. The church was painted white when the church expert Bendixen was there in 1904, and the interior walls were painted in pale red and yellow colours. The flat ceiling in the nave and the vaulted ceiling in the chancel were both painted white. This lasted until 1926, when a new porch was built, the church tower was rebuilt, and the whole exterior of the church was painted brown. Some of the white paint inside was removed in 1929 (a small section in the nave and one in the chancel). Only in the late 1960s was all the interior paint removed by the curator Ola Seter and Ola Grevstad. It was a donation by Fretheim Hotell which made it possible to wash off the paint.

The altarpiece form 1600/1681 is a rebuilt Renaissance altarpiece, 216 centimetres high, which originally must have been in the old stave church. The work on the top section and the ledge between the two levels may indicate that this was carried out by a professional carpenter. The columns and the wings are of inferior quality and probably date from the rebuilding period. The year 1681 is painted on the altarpiece and may refer to both the rebuilding and to the painting itself. The altarpiece has inscriptions with names of those who gave money to build it. The painting in the top section portrays the Calvary group - Jesus on the cross with Mary and John on each side. The other paintings are quite unusual to be found in an altarpiece.

The knight's robe from the 14th century is made of half-silk fabric and was woven in Venice. It is the only one of its kind in Norway, re-sewn and maybe used for a while as a chasuble, and eventually as an antependium. It has woven figures and is made both of linen thread, silk thread and "silver thread". So-called half-silk from the Middle Ages is extremely rare.

The chancel partition in baroque style dates from 1670 when the church was built. The wooden pulpit dates from 1667. The wooden baptismal font is undated. The brass baptismal bowl is also undated, whereas the holy water ewer dates from 1982. There are four brass altar candlesticks, two big ones and two small. The altar set consists of a chalice and paten in gilded silver, dating from the 16th century. The church has three church bells; one from about 1500 without any inscription, one from 1864 with inscription, and a third from 1992. The organ has four registers and dates from 1979. 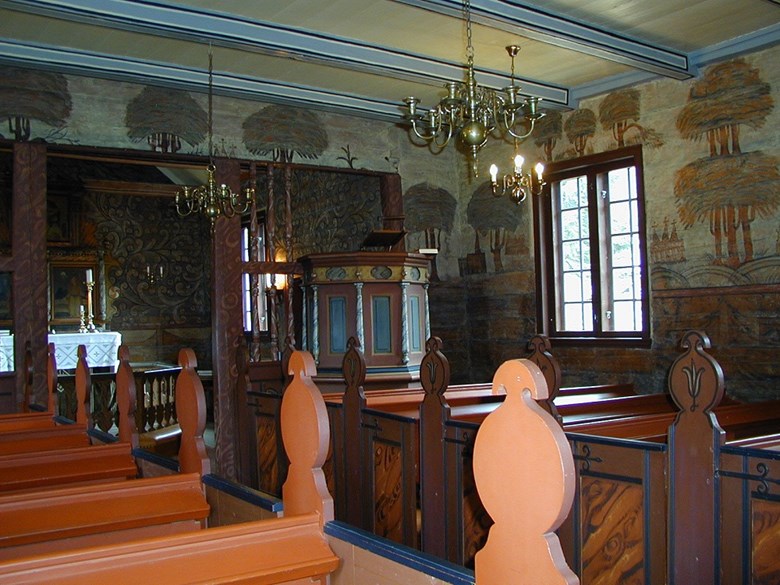 The congregational house in the outskirts of the churchyard is an old log cabin from 1830, previously located on the neighbouring farm and was on the point of being torn down. The labour youth association in the village fought to protect the log cabin against the will of the municipal council, and they eventually succeeded. The cabin has now been restored and modernized and now serves as a vestry, meeting room for the congregation, and so on. There is also an exhibit of the old knight's robe that was used as an antependium for a long time. 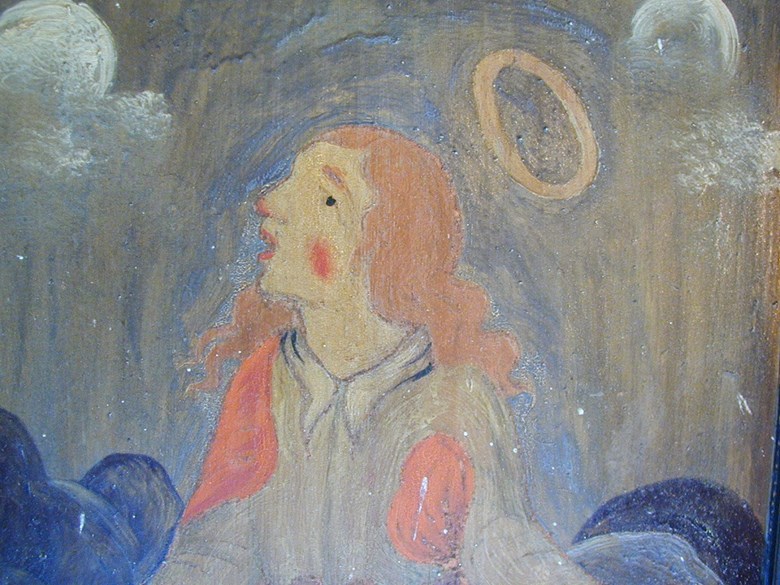 When you enter the church, you are immediately struck by the impressive and rich decorations. Walls and ceiling, both in the nave and the chancel, are covered with a lively and colourful paint. The decorations in the chancel are probably the oldest ones. Wainscoting covers the lower part of the walls, and higher up there are motifs of roses and acanthus leaves. Between the nave and the chancel there is low beam with a balustrade underneath. At the back of the nave there is a very narrow gallery with a staircase leading up from the nave. The pews still have doors.
Owner: Aurland kyrkjekontor. - Date: 2002. - Photographer: Bjarne Aagaard.
Aurland kyrkjekontor.
2002.
Bjarne Aagaard.

Detail from the altarpiece: John looking up at the cross. The characters on the altarpiece are dressed in mountain and farmers' clothes, and this is a good example of local adaptation and interpretation of the Christian message.
Owner: Aurland kyrkjekontor. - Date: 2002. - Photographer: Bjarne Aagaard.
Aurland kyrkjekontor.
2002.
Bjarne Aagaard.
resources:
Aaraas, Margrethe Henden m.fl.: På kyrkjeferd i Sogn og Fjordane - 2. Sogn. Selja Forlag. Førde 2000.