The Kinna church is built in stone, probably some time in the 12th century. It is the oldest and the only one of its kind in the region of Sunnfjord, and it is one of the most impressive medieval monuments in the west of Norway. It was the main church in the parish of Kinn until 1882, when a new church was built in the newly founded city of Florø. 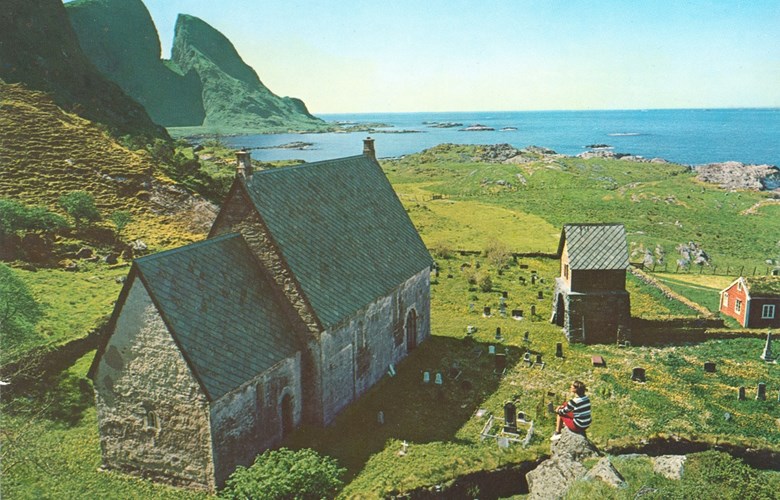 The Kinna church with the ocean and the characteristic outline of the 'Kinnaklova' mountain as a backdrop. The entrance to the church is through the belfry, erected in 1911-1912. The two church bells in the belfry used to be in the church, one dating from the 1650s and the other from 1859. In 1985, an open-air amphitheatre for the chronicle play of 'Kinnaspelet' was built to the south of the churchyard.

Earlier researchers were of the opinion that the church could date from the early 11th century, but the most common dating estimate now is the 12th century, with the chancel built half a century before the nave. There can be no doubt whatsoever that the church at Kinn and the monastery at Selja share a common historical background. The legend of St Sunniva and the holy men who suffer the martyr death on the island of Selja is recorded in three different sources from the Middle Ages.
From the island of Kinn we have a similar legend. In this case the princess is called Borni, and she is a member of Sunniva's party, and suffers the same fate. On the island of Selja a monastery was built, on Kinn a church was raised, both some time in the 12th century.

Einar Seim (1885-1978), the learned farmer at Kinn, thinks that the island must have been a settlement for Christian hermits who came from the west in the 9th and 10th centuries, and this may be the reason why a church later was built at Kinn. Some researchers think that both Kinn and Selja might have been centres for Christian hermits and missionaries from the Celtic church in Ireland and the British Isles. The stone crosses found in this county, like the one found at Svanøy, may signify a Christian influence prior to the year 1000. 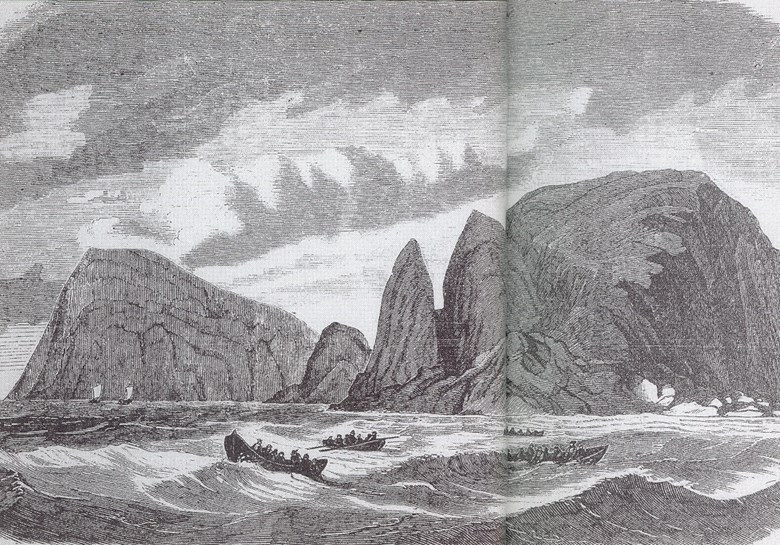 The richest church in Sunnfjord

People may wonder why such a big and impressive building was built at this location so close to the ocean. We have to bear in mind, however, that the sea has been the main artery of communication up until the present time, and Kinn is close to the outer sea lane along the coast. This sea lane also served as a pilgrim route from church to church on the journey to Selja and the Nidaros cathedral in Trondheim.

Since time immemorial Kinn has probably been a centre for the herring fisheries, and many fishermen gathered here to harvest the "silver of the ocean". The rich herring catches in the mid-19th century have been well documented, and there are references to the herring fisheries at Kinn in historical records.

The Kinna church has always had a sound economic footing, and in the Middle Ages it was the wealthiest church in Sunnfjord. The church received one third of the tithe of fish and grain, and in years of good herring catches this meant prosperity in the church coffer at Kinn. The church owned many farms in the parish, some even as far away as in Dalsfjorden and Nordfjord. In the 14th century, the Kinna church also had cattle they leased to farmers who needed more animals. In the 17th century, records show that the Kinna church offered financial assistance to the churches at Innvik and Vilnes. 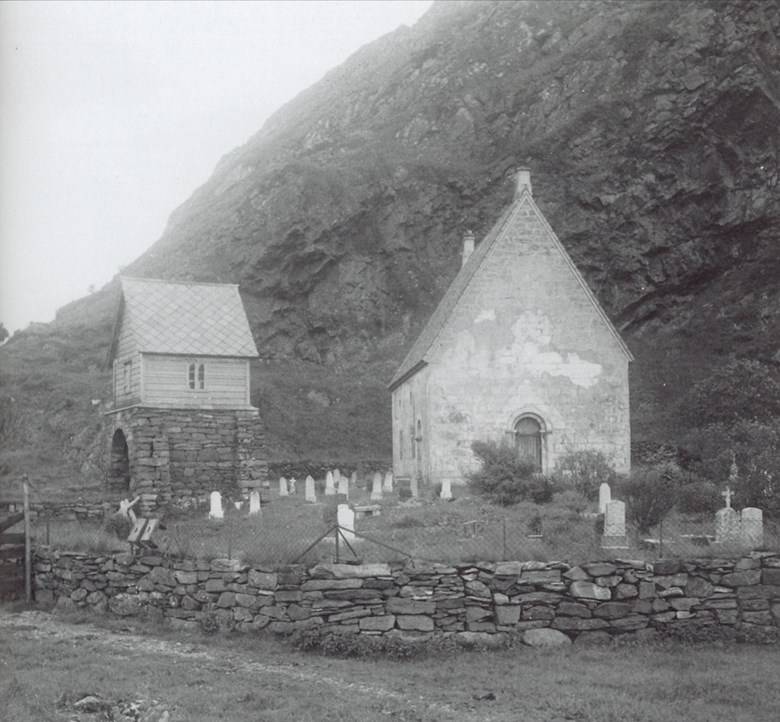 Nowadays the Kinna church is used only during the summer months. It is also a historical assembly site, especially during the annual chronicle play around mid-summer. The belfry is placed on a double stone vault which leads to the graveyard around the church. The oldest bell dates from about 1650, and the other from 1849. There have been a number of porches, all built in wood. The present porch is new, built in the early 1980s. The church itself is built in a Romanesque style with Roman-arched windows and doors. The municipality of Kinn bought the church in 1866, and in 1868-69, major repair work was carried out.

The "lectorium" constitutes the oldest part of the church. Research has shown that it most likely was built in the mid-13th century, and the wooden reliefs have been carved by artists at the royal court in Bergen at the time of Håkon Håkonson. It is considered to be one of the finest gems from Norwegian medieval art.

The altar in the chancel is made of soapstone, and in the stone slab on top there is a small hole covered with a marble lid. This is where the holy objects and relics were hidden. The three saint figures in the triptych on the south wall in the chancel are made in the Netherlands, perhaps a gift to the church in the early 16th century. At Kinn these figures have been renamed Ingebjørg, Borni, and Sunniva, all linked to local legends. The altarpiece was built in 1644, probably by Peter Negelsen who made altarpieces and other religious objects of art for many churches in this country.

The pulpit was made in the early 1700s by Mads Nilsen, Bergen. Above the pulpit there is a richly decorated, carved canopy.

The Kinna church was restored in 1911-12, and many things that were wrongly done 50 years earlier were then corrected. One case in point is that the windows were restored back to its former Romanesque form in a soapstone framework. New pews were also made, and parts of the old ones are now standing along the side walls.

Another restoration effort was carried out in the late 1960s under the auspices of the Directorate for Cultural Heritage in conjunction with the Kinn "sokn" council. The interior walls were whitewashed and a new organ was bought during this period. The open-air amphitheatre on the southern side of the church was built in connection with the very first performance of the chronicle play "Kinnaspelet" in 1985. 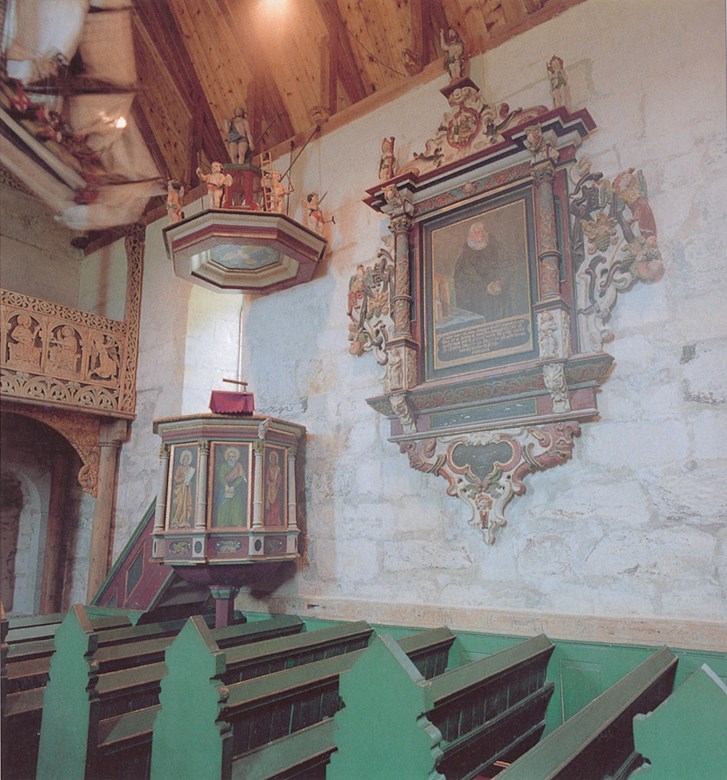 The location and the architecture of the Kinna church is unique, and it is the only church built in stone in the region of Sunnfjord. There is no clear explanation why such a costly building was located here on a mountainous island far out by the open sea. The answer, however, must be found in what was the origin of the legend material linked to Borni and St. Sunniva. To the left the belfry which was built on a stone vault in the last restoration in 1911-1912.
Owner: Vest Foto-samlinga. - Date: 1960-åra. - Photographer: Vest Foto.
Vest Foto-samlinga.
1960-åra.
Vest Foto.

The church seen from the south. The picture is taken before the churchyard was levelled in the autumn of 1984 and the permanent open-air amphitheatre for the chronicle play was built the following year. We can also see the belfry built in 1911/1912. The old cottage close to the church is now used by the congregation. In the background the islands of Litle Batalden and Batalden.
Owner: Hermund Kleppa. - Date: Kring 1975. - Photographer: Ukjend.
Hermund Kleppa.
Kring 1975.
Ukjend.