The waterfalls in the Nærøyfjord

There are as many as 25 waterfalls of various sizes along the Nærøyfjord. The waterfall called Kjelfossen is the most impressive of these, but there are also others that are worth mentioning. 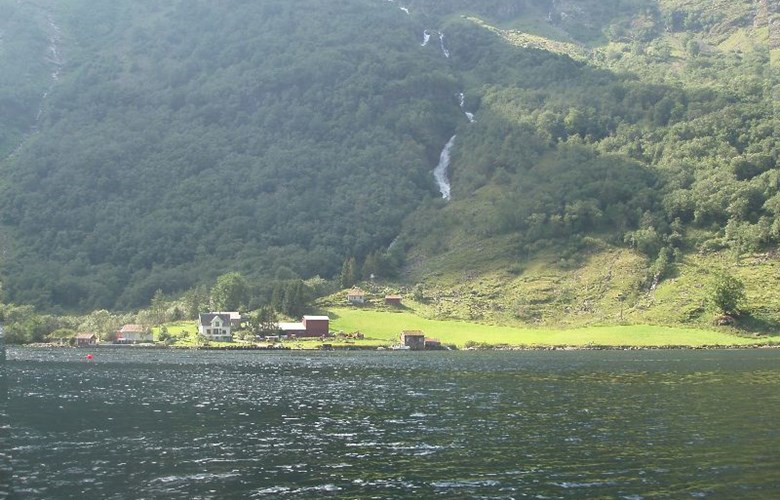 The river of Tufteelvi runs down to the fjord at the farm Tufto. Along this river there is an old track leading up to the mountain farms at Rimstigen, Today this has become a popular hiking trail.

Kjelfossen
Kjelfossen - which is also called "Stor Kjelfossen" - is a part of the river Kjelfossgrovi that has its source in the mountain lakes of Kjellfossvotni at about 1180 metres above sea level. The waterfall runs down south of the farm of Ramsøy, to the east of Gudvangen at the head of the Nærøyfjord. Kjelfossen has a free fall of 150 metres and a total drop of 840 metres. According to Statistics Norway, this is the highest waterfall in Norway.

Kjelfossen is said to have got its name after a milkmaid lost her cheese pot into the waterfall. The legend has it that she put the pot in the river, but failed to notice that the water was rising. The pot therefore floated up and was pushed off the cliff at the waterfall.

The river of Tufteelvi
The hamlet of Bakka is the first settlement along the Nærøyfjord northeast of Gudvangen and Ramsøy. The hamlet is located on the northwest side of the fjord, consisting of the farms Bakka and Tufto. At Tufto the river Tufteelvi falls down the mountainside. Along this river there is a track leading up to the mountain farms of Rimstigen, Breidalen and Røyrdotten up to an elevation of 1300 metres.

The waterfalls of Odnesfossen and Styvefossen
Just around the next bend in the fjord we come to the short but beautiful waterfall of Odnesfossen. Odnes is a pasture belonging to the Styvi farm, and owing to the well-managed cultural landscape, the waterfall blends nicely with the landscape. Behind the farmyard at Styvi the river of Styviselvi runs down the mountainside and forms a small waterfall. The two waterfalls at Styvi can be best viewed by hiking the old postal road between Styvi and the so-called "Bleiklindi" (the pale linden tree), a rare and protected mutant variety of a linden tree with yellow leaves in the spring and summer months and with green leaves in the autumn. This tree has become quite an attraction for visitors to this area

The waterfall of Lægdafossen and the river of Sagelvi
At the very entrance to the Nærøyfjord, just before the fjord branches off to the Aurlandsfjord, the point of Krossnes is located. Sagelvi and Lægdafossen are located just before getting to this point. The waterfall is held to be one of the most important ones within the Nærøyfjord World Heritage area with its drop of 75 metres. At the mountain farm of Lægdene there was a fine pine forest in the mid-19th century that was cut down. The name Sagelvi below the mountain farm comes from former sawmill activities along the river.

Lægdafossen has a free fall of 75 metres and is held to be one of the most important ones in the World Heritage area.
Owner: Nærøyfjorden Verdsavpark - Date: 06.08.07 - Photographer: Trude Knutzen
Nærøyfjorden Verdsavpark
06.08.07
Trude Knutzen
resources:
The West Norwegian Fjords. Norwegian Nomination 2004. UNESCO World Heritage List. Miljøverndepartementet.