Brekke church is a longchurch built in wood, located in the village of Brekke on the Risnesfjord in the municipality of Gulen. The church has a seating capacity of 390, and was consecrated on 19 November, 1862 by the dean Thomas Erichsen. The architect Christian Henrik Grosch designed the church which is said to be the third at this site. Brekke church is the "sokn" church for the "sokn" of Brekke in the Gulen parish. 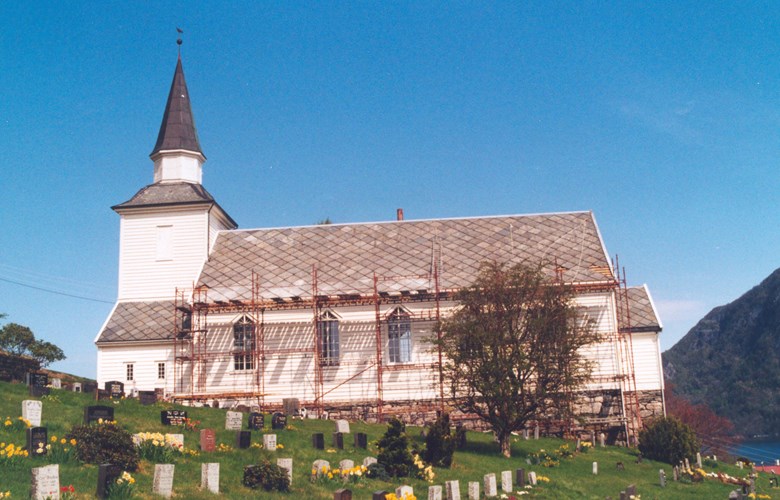 The building of a new church

A church which is almost in ruins does God little honour and is of little use to man. The conditions for the congregation at Brekke were extremely miserable 150 years ago. When the church building was on the verge of falling apart, the diocese board of directors demanded a new church building, unless extensive repairs and extensions could be carried out immediately. The result was a new church, undoubtedly inspired by the ongoing construction of a new church in the neighbouring village of Eivindvik. At Brekke, however, they did not tear down the old church until the new church was completed.
As was the case elsewhere, the ground work was carried out in the form of duties, and the local farmers were also responsible for getting the building material transported to the building site. As the old church was still standing while the new one was being erected, the new church was put up on the south side of the old church on the lower part of the churchyard which was extended in 1861. The interior measurements of Brekke church are 16.8 by 10.2 metres for the nave (about 55 by 34 feet). The chancel has the same width and is 5.1 metres long (about 17 feet). The porch has a length of 4.6 metres (about 15 feet). Originally there was only one staircase up to the gallery from the turret base, and the church also had a vicar's vestry behind the chancel.

The present steeple is fairly identical to the original, but the first steeple was slimmer and not built so solidly, and could not withstand the strong southerly winds in the area. In 1884, some 20 years after the completion of the church, the steeple was torn down and a lower one was built in its place. However, the local people did not at all like the low steeple. They wanted a high, majestic steeple similar to the first one. Early in the 19th century, there were many people who went in for both building a new steeple and giving the interior a warmer atmosphere by means of panelling and painting. Only in the 1930s were the plans realised under the guidance of the architect Lars Norevik from Ortnevik. The reconstruction was completed in 1939. New rooms were added; a combined vestry/meeting room was built on one side of the porch and a mortuary on the opposite side. Today the mortuary is in an annexe, and toilet facilities have been installed in its stead.

A new steeple was built to its former height and covered with copper plates. The weather-exposed south side was restored with new window frames and panelling. Inside the church the pews were made more comfortable, and also moved a little forward to make room for a passage along the sides. At the same time, the walls were panelled from floor to vault. The stoves bought for the church in 1901 did not produce much heat, and the congregation also complained about too much smoke in the church. Consequently, in 1933, the stoves were replaced by two new, bigger stoves. These were used until electrical heating was installed for the centenary / centennial in 1962. The interior paint work in the 1930s took place under the guidance of the artist Mons Breidvik (1881-1950). He came from the farm Breidvika a little further west of Brekke. He did not want to receive any pay for this work.

Repainting of the interior

Originally the church was built with horizontal timber painted in a greyish blue colour. In the 1930s, the walls were painted in red and the pews in a reddish brown colour. According to the former verger Ivar Botnen, the paint must have been of inferior quality, because the pews and the walls were never completely dry. A number of stories still circulate about people leaving the service with smears of paint on their Sunday clothes.
For the centenary / centennial in 1962, the pews were repainted in more "appropriate" colours, this time in green and pearl grey. The pew doors are painted white with blue areas in the middle. This vivid blue colour recurs elsewhere in the church as well, as is the case with the green borders, for example around the areas on the pew doors. There are two high, pointed windows in the chancel, one on each side, and in the nave there are three windows on either side. The inspiration from the stave churches can be seen in the plain but elegant columns along the central aisle of the nave. There are four low columns under the gallery on both sides, with three columns on either side of the central aisle. However, in spite of these solid columns, the strong southerly winds have tilted the church structure. The whole building tilts to the north, and from the floor up to top of the columns there is actually a vertical deviation of 18 centimetres (about seven inches)!

The altarpiece from 1862 shows "Jesus in the garden of Gethsemane", painted by Anders Askevold. The motif is from Luke 22;43: "And there appeared an angel unto him from heaven, strengthening him". The altarpiece was not completed for the consecration ceremony, and a simple white wooden cross was used in the meantime. This cross is now placed in a side room by the organ. The altarpiece is paid for by crofters, servants, and retired former farmers.
On the altar we see two undated brass candlesticks. For Holy Communion purposes there is a chalice, a paten, and a pyx (a container for consecrated wafers), all in silver. There is also a wine cruet in silver plate. All these objects are undated.

Both the pulpit and the wooden font date from 1862. The brass baptismal bowl is undated with the following inscription: "He that believeth and is baptized shall be saved" (Mark 16;16). The holy water brass ewer from 1980 and two brass chandeliers from 1962 are gifts from the Brekke association of farmers' wives .
In the church there are two tapestries from 1950, made by Emma Breidvik after a cardboard design by Mons Breidvik. The organ dates from 1930 with seven registers plus one. The church has two bells; one undated but probably from an earlier church, and one from before 1850, recast in 1946.

The chancel has a plain but warm form, and the light panelling provides a good backdrop for the altarpiece and the tapestries on the sides. The tapestries are made by Emma Breidvik, the one to the left shows an angel and the one to the right depicts a representation of the Crucifixion at Calvary. The altarpiece is painted by Anders Askevold and its motif is 'Jesus in the garden of Gethsemane'.
Owner: Fylkesarkivet i Sogn og Fjordane. - Date: 30.07.1999. - Photographer: Lisabet Risa.
Fylkesarkivet i Sogn og Fjordane.
30.07.1999.
Lisabet Risa.