Ervik church is a longchurch built in brick and concrete, located in the bay of Ervika, far to the west at Stadtlandet in the municipality of Selje. The church, which has a maximum seating capacity of 150, was consecrated on 14 June, 1970, by the bishop Per Juvkvam. The architects Arnstein Arneberg and Olav Platou designed the church. From 1 January, 1997, Ervik is a ¿sokn" of its own in the Selje parish. Before that date the Ervik church had status as a chapel. 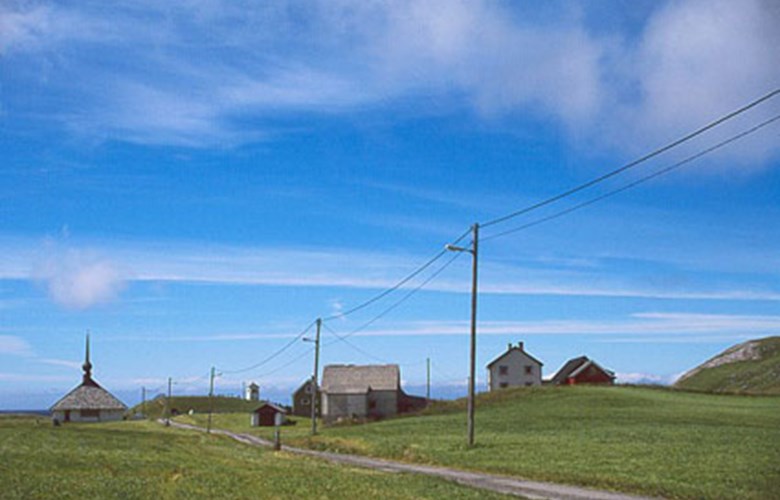 In calm and stormy weather, Ervika is unique. It is a fertile village with a viable agriculture, a two-km-long sandy beach, which in good weather reminds one of the Mediterranean, and endless breakers from a never-resting ocean. And, as a finishing touch, the chapel and the graveyard, bearing testimony to the drama when the coastal steamer 'Sanct Svithun' went down on a September evening in 1943.

Churchyard since the 16th century

The churchyard by the bay of Ervika dates back to before 1550, and it was probably sailors who lost their lives in shipwrecks who were the first to be buried here. The dreaded, open sea lane of Stadthavet is by many people considered to be the biggest graveyard along the Norwegian coast. According to one legend, Portuguese sailors were the first to find their graves at Ervika. The distance to the ¿sokn" church at Selje was the main reason why a graveyard was established here, the vicar Peder Harboe Frimann reported in 1746. "At Ervigen (sic) at Stadtlandet there is a long-established graveyard, where the inhabitants of the farms furthest to the west at Stad bury their dead, as they cannot be conveniently taken to the graveyard at Selløe (Selje). And to the said farm of Erviig (sic) vicars for a long time have travelled at Christmas or just after Christmas to hold a service for the inhabitants there."

Graveyard with a church bell

It was an old custom that the Selje vicar once a year held a service at Ervika. In the early years the service was held in early February when many people were there for the seasonal fisheries. At the same time, the vicar held funeral rites over those who had been buried in the previous year. Gabriel Heiberg, vicar at Selje from 1806 to 1826, moved the date for the service to midsummer. In his opinion, the midwinter service was especially inconvenient because of the frequent storms which made the voyage highly dangerous.

The graveyard at Ervika is located in a mound of sand, and this has accumulated over the years, which means that there are at present graves in at least three ¿layers". In 1906, the graveyard was walled in, and a portal of whale bones was built. The following year a belfry was erected, containing the old bell from the church at Bø, dating back to about 1315. This bell has the following inscription: ¿Jon Biarnarson ordered me. Jac. Jaccob (Jakob Jakobson) made me." At first the bell hung in the church at Bø, later on from 1654 in the mainland church, and from 1866 in the Leikanger church. The bell cracked in 1844 and was recast with a new inscription: ¿I was made by Knud Andersen Sundt Bergen MDCCCXLIV SDG AGÆ (1844 Soli Deo Gloria - Aleine Gud æra ~ Glory to God Alone").

The first initiative to build a church at Stad was taken after the sinking of the south-bound express coastal steamer "Sanct Svithun" on 30 September, 1943. It was in fact British fighter planes which bombed the ship, based on the information that there were German soldiers onboard. 50 people lost their lives in the tragedy, whereas 78 were saved through heroic efforts of the local people. One of those who were saved was the inspector of ships Brekhus, and he was the first person to launch the idea that Ervik should get a memorial chapel, both in memory of those who lost their lives, as well as those who took part in the dramatic rescue operation. However, the Nazis ¿stole" the idea, made designs and laid the foundation stone for a chapel. This interference did not serve the church issue at Ervika at all, and many years were to pass before the church project was restarted.

About 1960, the issue was once more brought up, this time with the headmaster Adolf Ervik taking the initiative. A building committee raised the necessary start capital, and contacted the renowned architect Arnstein Arneberg, who had designed the Olso Town Hall, and later the Høyanger church. Arneberg, however, died on 6 June, 1961, just a few days before he was about to travel to Ervik to become familiar with the site. Olav Platou then took over the work of completing the project. Throughout many years people had worked locally to raise enough means, both public and private, before the building could be started in 1968 on a site by the old graveyard, a stone¿s throw from the rolling ocean.

Two years later, the memorial chapter was completed, one of the most characteristic of the newer church buildings in the county. Ervik church is built in concrete and brick with an unusual onion-domed steeple to the west where the ship bell from "Sanct Svithun" serves as a church bell. The interior is furbished as a local church community centre with the church room containing a nave and a chancel, with a partition door to one big and one small meeting room. In the spacious vestibule there is an exhibition of several objects from the "Sanct Svithun" tragedy, such as the ship siren, a lifebuoy, a memorial board with the names of those who lost their lives, as well as a number of paintings and photographs.

A 60-cm-long ship model of "Sanct Svithun" is placed in the wall between the big meeting room and the cloakroom in such as way that it can be seen from both sides. The walls in the church room consist of white-painted brick, whereas the meeting rooms have panelled walls. All the rooms have panelled ceilings as well. The church room has five windows with stained-glass paintings. When the partition doors are opened, the number of seats doubles from 75 to 150. The small meeting room also serves as a "roadside church" in the summer.

The altar table from 1970 is made of marble. There are two candlesticks, a gift from Harald Strand, Randi Prostad and Irene Sætren. When "Sanct Svithun" went down in 1943, Irene was just a baby, and the youngest person to be rescued. The candlesticks were bought in 1960, and they were kept in a safe until the chapel was completed in 1970. The seven-branched candelabra with an inscription also dates from 1970. The Holy Communion set consists of a chalice, paten, and a wine flagon. The font, the baptismal bowl and the holy water ewer in silver are from 1970, all gifts from the ¿Det Stavangerske Dampskibsselskab" (The Stavanger Steamship Company). 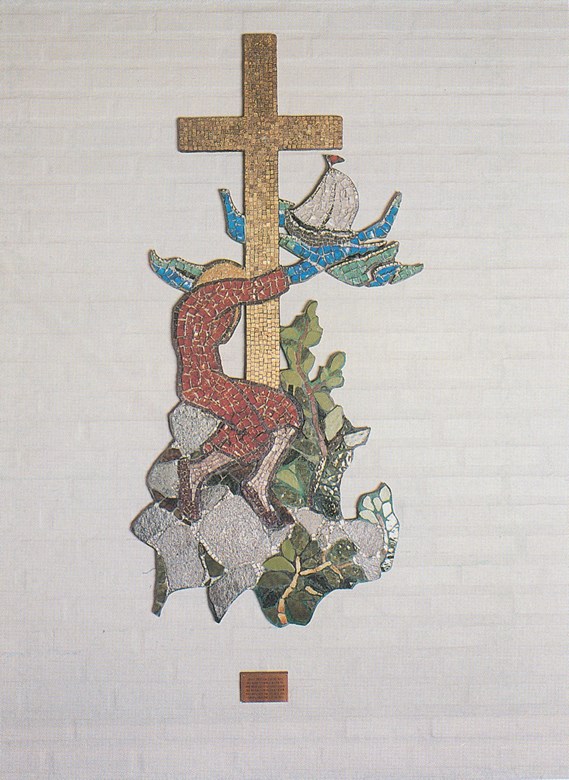 The stained-glass paintings are a gift from Heyerdahl¿s trust fund. The Dutch icon from 1996 shows St Sunniva. The relief of the Holy Communion on the back wall of the church is a gift from the families and relatives of those who lost their lives in the tragedy. The collection box was originally the ship siren of "Sanct Svithun".

The electronic organ dates from 1990. The memorial board from 1976 with the names of the deceased is made of copper. It hangs in the vestibule, and is another gift from ¿Det Stavangerske Dampskibsselskab".

The altarpiece from 1979 is made by Kalla Skrøvseth, who was inspired by the story of the 'Sanct Svithun' shipwreck. The main motif is a woman clinging to the cross. In the background is a ship in rough seas. The material used is crystal and slate, gold and silver.
Owner: I <i>Sanct Svituns krigsforlis - Eit 50 års minne.</i> - Date: 1993. - Photographer: John Kråkenes.
I <i>Sanct Svituns krigsforlis - Eit 50 års minne.</i>
1993.
John Kråkenes.

The church bell was formerly used as a ship bell on the coastal express steamer S/S 'Sanct Svithun'. The bell has the inscription 'May happiness and Success * follow you * Sanct Svithun * 1927 * Danziger Werft Danzig'. The bell was later given to the people of Ervik by 'Det Stavangerske Dampskibsselskab', and has been used in the steeple since 1970. Then the bell got a new inscription: 'To the people of Ervik, in recognition and appreciation of the rescue operation that saved many lives when S/S 'Sanct Svithun' went down on 30 September, 1943'. The anchor from 'Sanct Svithun' is placed outside the church entrance.
Owner: I <i>Sanct Svituns krigsforlis - Eit 50 års minne.</i> - Date: 1993. - Photographer: John Kråkenes.
I <i>Sanct Svituns krigsforlis - Eit 50 års minne.</i>
1993.
John Kråkenes.