Bakka church is a so-called longchurch made of wood, located in the hamlet of Bakka in the Nærøyfjord. The church, with a seating capacity of 200, was designed by the architect Christian Henrik Grosch and consecrated on 11 May 1859. In that year, Nærøy became a "sokn" (sub-parish) of its own, separated from the Undredal "sokn". Nærøy "sokn" is the smallest "sokn" in the county of Sogn og Fjordane and the Bjørgvin deanery with 104 registered members in 1999. Every year one or two children are baptized and the same number for confirmation candidates. 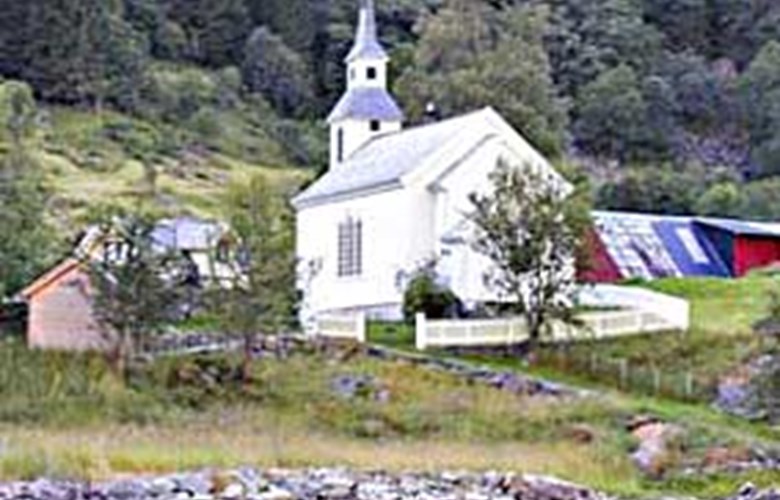 Bakka kyrkje must be among the most photographed churches in Norway. Every summer thousands of tourists pass the church on the many cruise liners, boats and ferries plying the Nærøyfjord. And there, just like a doll's house against a backdrop of dramatic mountains, the white-painted, idyllic Bakka church is located.

The location of the church

Bakka church was the result of a long struggle concerning the church location in the Undredal "sokn". The issue of moving the old stave church from Undredal to Nærøy was actually the first item on the agenda when the Aurland municipality was established in 1837. The issue had been discussed ever since the 1820s because the people along the Nærøyfjord had such a long distance to get to church. Another reason was that the majority of the population in the Undredal "sokn" then lived along the Nærøyfjord or in the valley of Nærøydalen. Getting to church was especially dangerous in the winter months, and there are many stories about cancellations of church services, in spite of the fact that the valley of Nærøydalen and the Nærøyfjord from the late 18th century had become part of the Royal Postal Road between Bergen and Christiania (Oslo).
In 1851, a law was passed to the effect that each church should have seating capacity for one third of the congregation led to a renewed discussion. However, as the stave church was too small, the board of aldermen decided to build a completely new church at Bakka. At the same time, the "sokn" was split up, and the Bakka church now served all the villages and hamlets from Stalheim on the border to Voss all the way out to Breisnes in the Aurlandsfjord. The church for the Nærøy "sokn" was located at Bakka because the hamlet was the midway point in the new "sokn".

The Bakka church is a simple, small, white-painted wooden church with a big window in three sections on either side of the nave. The nave measures 13.5 times 7 metres, plus a 4.4-metres-long chancel with the same width as the nave. The altarpiece stands in a narrower section of the chancel, 1.7 metres times 4.3 metres. The porch faces west, measuring 3.6 times 3.8 metres with a somewhat smaller tower above. Facing the east a small vestry has been built, and the Bakka church is thus the only church in Aurland containing a vestry. The interior walls are painted in a wooden colour as they have always been. The ceiling is flat, and in the western end there is a small gallery. The chancel arch, the pulpit and a board in the ceiling have been restored with a marbling paint, a colour used by the curator Ola Seter and his assistant, Ola Grevstad, about 1970. (They did a similar restoration work both at Undredal and Flåm, as well as in other churches in the county in the 1960s and 1970s). These areas had been painted over in a white colour since the 1950s, a colour that still remains in the pews and the altarpiece.

In the church room itself we notice a number of text sections. Above the chancel arch bible texts are painted directly on the wall, and there is another one on the crossbeam above the chancel arch. On either side of the end wall in the chancel are painted the names of those who financed the church. An interesting point in connection with the row of names and the share they paid is that it corresponds exactly to the distribution of ownership of the Undredal church that they previously owned. The building of the Bakka church was a part of the plan whereby the church owners at Undredal sold the church to the village in return for paying for the new church at Bakka.
In addition to the pulpit from 1859, the altarpiece from 1907 and the organ from 1999, the interior comprises four altar candlesticks, an altar set (chalice, paten and wine flagon), a wooden baptismal font from 1936 with baptismal bowl and holy water ewer made of copper, a golden wooden cross and a church bell, both dating from 1859.

Most cases involving organs deal with raising enough money to buy a new one. In the case of Bakka, however, the money was secured, but the location of the organ caused problems. The issue came to a head when the Directorate for Cultural Heritage threatened to list the 140-year-old church to force through his will of placing the organ in the chancel and not on the gallery.
In 1997, it was decided to buy a new organ at a price of NOK 534 000. The idea was to place the organ in the chancel to avoid having to make any alterations on the gallery. The following year, however, when the organ builder came on an inspection tour, he maintained that the organ should be placed on the gallery. This will improve the sound significantly, he said. Supported by an organ consultant and the Bjørgvin deanery, an application was sent to the Directorate for Cultural Heritage in February 1999 to place the organ on the gallery. The application was turned down twice. According to the Directorate for Cultural Heritage, the Bakka church was of such a high cultural-historical importance that no changes in the gallery would be permitted. In addition, the argument from Oslo was that the architect of the church, Christian Heinrich Grosch, was one of the foremost church architects in Norway in the 19th century, and the Bakka church was the first church he designed in the Bjørgvin deanery. Moreover, as the church was more or less unchanged since it was built in 1859, the Directorate was of the opinion that the church should not be changed. The Bakka church was considered to be a cultural heritage monument of national importance, and they were even considering listing the church to avoid the placing of the organ on the gallery.

The Ministry for Church Affairs made the final decision in accordance with the view of the Directorate for Cultural Heritage. The organ was taken into use - in the chancel - at a special service on 21 November 1999. The church was filled with 130 people, not a bad turnout for a village with 20 inhabitants. The Aurland congregation magazine reported that this was the day when the sound of organ music could be heard in earnest in the Nærøy "sokn".

What catches the eye when you enter the Bakka church is the big, new organ (to the left in the picture), placed against the north chancel wall. The village people wanted the organ on the gallery, but were not allowed to do that by the Directorate for Cultural Heritage. The organ was built by Nils Arne Venheim. The pulpit, dating from 1859, rests on the front pew. It is high, with five sections and columns in between.
Owner: Aurland kyrkjekontor. - Date: 2002. - Photographer: Bjarne Aagaard.
Aurland kyrkjekontor.
2002.
Bjarne Aagaard.

The altarpiece from 1907 is painted by Nils Bergslien, and the frame with carved ornaments is made by Magnus Dagestad. The motif is Jesus in the Garden of Gethsemane. At first, a simple, gilded cross served as an altarpiece.
Owner: Aurland kyrkjekontor. - Date: 2002. - Photographer: Bjarne Aagaard.
Aurland kyrkjekontor.
2002.
Bjarne Aagaard.
resources:
Aaraas, Margrethe Henden m.fl.: På kyrkjeferd i Sogn og Fjordane - 2. Sogn. Selja Forlag. Førde 2000.