Hans Dahl from Granvin in Hardanger, built a summer resort in Balestrand in 1893. From 1919 he lived in Balestrand all year round. Dahl painted the spectacular scenery of the western part of Norway - vestlandet - and often put beautiful, blond girls in national costumes in his paintings. Dahl was well known abroad; he was a close friend of the German emperor and was well liked in the village. 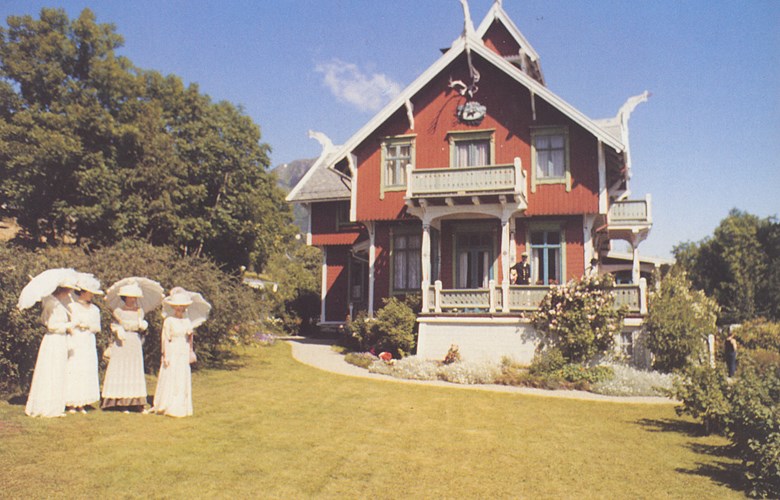 Hans Dahl's villa in Balestrand, built in 1893. This photo was taken when the NRK were making a program about the German Emperor's trips to the Norwegian fjords. They then reconstructed the garden parties given by Dahl in the honour of the Emperor. The ladies in the photo portrayed ladies from the upper classes in Bergen who visited Balestrand to take part in the glamorous life around the emperor.

Hans Dahl was born in Granvin in Hardanger in 1849. He was married to Helene Bewer (1862-1927). Hans Dahl graduated as an officer in 1871 and served in the "Bergenske Brigade" until 1874. He then tendered his resignation to become a painter. While attending the military academy he apprenticed with, among others, J.F. Eckersberg and Knut Bergslien. He also studied in Karlsruhe and Düsseldorf. There, Hans Gude was one of his teachers. In 1892 he bought a property in Balestrand but lived in Berlin until 1919. This year he moved to Balestrand to live permanently. In 1902 Dahl was appointed knight of the order of St. Olav, 1st class.

Dahl had his first exhibition in Düsseldorf in 1876. Already then he had found a style and subjects which he later kept to. Dahl lived in Germany from 1888 but every summer he went to Norway to make sketches of the "vestland" scenery.
In the 1890s a new school of art arose, and artists like Dahl were not very popular in the leading circles in the capital. He was particularly criticised by the art historian Jens Thiis. There are no paintings by Hans Dahl in the National Art Gallery. Thiis was much opposed to his kind of painting. The artist Christian Krogh also disapproved of the so-called Düsseldorfers. Hans Dahl however, maintained his opinion of art. He had good writing skills and enjoyed a debate. In the publication "Malerne og publikum" he wrote that he wanted art to be comprehensible to ordinary people. He did not want it to be highbrow culture for the elite. Dahl often described the scenery of the western part of Norway in brilliant sunshine with smiling people in national costumes. He was not highly valued as an artist by art critiques in his own time. However, he had a large market with private collectors.
In the 1980s paintings by Hans Dahl have fetched prices around 200 000 kroner.

Hans Dahl was concerned with his health. He often slept on the veranda in winter time. Both his beard and bed clothes were rime frozen in the morning. However, Dahl dressed in woollen cloths and thought wool particularly important to people's health. He wrote both articles and a small book about this. In the publication "How to strengthen ones Health and Work Capacity" he puts forward his thoughts and in 1928 he gave a lecture in Oslo. He thundered against the medical experts who were present. Dr. Tannberg said: "I am no supporter of all this wool." Dahl did not change his mind because of this. He was otherwise a light-hearted man. "Keep a cheerful mind in Storm as well as in Sunshine" he once wrote.

A friend of the Emperor

. The German emperor was an annual summer guest in Balestrand until World War I. He liked both Dahl and his work. Dahl's home was in many ways also the Emperor's home when he visited Balestrand. Dahl was the emperor's good friend. He also acted as a consultant when Wilhelm started the work with the statues in Balestrand and Vangsnes. Every summer there were garden parties in Dahl's garden. Then Dahl acted as host and the Emperor was the guest of honour. Ladies from the upper classes in Bergen had come to Balestrand. On the other side of the picket fence the wide-eyed villagers were watching.

Dahl kept in contact with the Emperor throughout his life, and we expect that this was a deep personal friendship. Dahl was highly valued both by Wilhelm I and Wilhelm II. Wilhelm II bought many paintings from Dahl. In 1910 Dahl was appointed Royal Prussian Professor of Art.

Well-liked in the village

On the19th of February 1919, Hans Dahl was 70 years old. He celebrated by throwing a party in his villa. Sigurd Kvikne was one of the guests and said in his speech that Hans Dahl had made Norway known abroad and that Balestrand owed him great thanks because so many visitors had come here. While Dahl lived in Balestrand he made many travels in the district. He went to both the mountains and the different arms of the fjord in search of subjects to paint. He often brought girls with him as models. The persons who modelled for him characterised him as a nice man, kind and understanding. Dahl usually employed two girls as models. He paid them 80-100 kroner a month. "It was a lot of money in those days", said a woman who worked as a model for many years. Hans Dahl died in Balestrand and is buried in the graveyard by Tjugum Church.

It is said to be Adelsteen Normann who made Dahl settle in Balestrand. Dahl's villa was of a similar design as Normann's. Like many other houses in Balestrand it was built and manufactured by the firm Jacob Digre in Trondheim. When Dahl died, the property was transferred to Eline Dahl who was married to Ludwig Wiese. They lived in England and used the place until 1958 when the house and a large part of what was in it were sold at an auction. Anders Kvalheim who was a teacher, then bought the property and lived there until 1966 when Oddvar and Solveig Ugulen bought it.