Few associate grain cultivation with the Solund landscape. Nonetheless, even in the smallest of streams there are visible signs of flour milling. Legal estate documents tell of over 20 farm flour mills in operation. 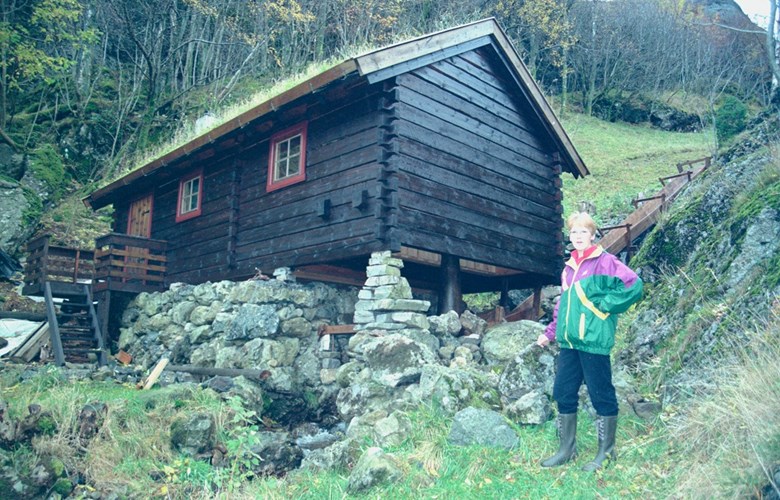 The restored mill at Furevika. This mill was referred to as early as around 1750. To the right there is a glimpse of the water wheel, to the left the entrance to the fireplace and the stone slab. The mill was in use until some time after the Second World War. Even during the war, when the Germans sealed the mill and banned the milling of grain, it was in use. The owner did not regard this as much of an offence.

The desire to be self-sufficient, coupled with the pleasure of seeing one's own water wheel at work, may be the main explanation that so many farm mills were built out here. Moreover, most of the lakes were so small that there was hardly more water than for this single autumn milling.
If it was at all possible to make a pond big enough to mill the year's harvest, the mill-race and other equipment were put up in the river. A small milling plant was required as well, but only a few farms found the materials in their own woods. Others found materials drifted ashore on their beaches, or they used worn out boards from boats.

So far no research has been carried out into the origins of the millstones in Solund. The sizes varied much. On a few occasions they found millstones in neighbouring Gulen. There are known millstone quarries in Hyllestad and on Losna. But when they went to the trouble of setting sail to bring home such a heavy load, the shortest distance was not always decisive. More important were shipping lanes with a steady wind for the sails.
On the low islands to the west of the Straumsfjorden, grain was not cultivated. Further east the soil was deeper and more fertile. The fields were small and could be numerous, all with names of their own. An immigrant wife from Bremanger called these fields "apron patches".

The history of farms and families gives information that potatoes and oats were the most common crops. Oats grew willingly and met very important needs in the households. Admittedly, other cereals were tried as well, from time to time, such as barley and wheat.
A good place for the cultivation of grain was believed to be Oddekalv. Close by, barren Storøy is located. But even there cereal was grown, and of the heaviest quality, it was said. These islands have their backs on the ocean. Southward- looking Kråkevåg was, as could be expected, good cereal land. But, unbelievably, at small Lending they sowed 1 ¼ barrels and harvested seven! This was one of the best yields out there.

Value added with a mill

In the 18th and 19th centuries, the mills are mentioned in legal documents concerning settlements of estates. A strange fact is that a mill at the seat of Buskøy is mentioned several times, although it is believed that it never existed. Later the mills may have been out of operation, and their value was hardly worth mentioning. When the grain cultivation came to an end after the Second World War, most of the millstones had been in the rivers for 2-3 generations.
The mills at Furevika and at Lia had the best and steadiest water supply, and people arrived there in rowboats with their sacks of grain to mill when possible. The Furevika mill is the biggest, being in operation until after the war. At Losna there were two mills or more in the same river.

It was not easy in all places to get the grain well dried before the milling. At some farms there is still the stone slab which was installed beside the fireplace in the "eldhus"(a cottage used mainly for washing clothes and baking), and in this way became a cereal drying stone. Only when the grain was very dry, the flour could get high quality. If not, the flour stuck to the millstones and got lumpy.
At Furevika they built a two-room, spacious mill plant of whole timber from their own forest. In one of the rooms there were a fireplace and a large stone slab, so the people there and visitors could go home with a good result
With one exception, there are today only stone walls and place names which tell of sounds from mills in hidden bays and straits.

At the Kvernhuselva (river)in the Bjørnefjorden, this big stone can be found. Swearwords could well have been uttered, since a slice was broken off during the transport to the river. A lot of water was required, but either there were two mills here, or the mill was moved for better utilization of the water.
Owner: Stig Steinsund. - Date: 2000. - Photographer: Stig Steinsund.
Stig Steinsund.
2000.
Stig Steinsund.
resources:
Steinsøy, Alf: Solund. Gards- og ættesoge.Bind 1 og 2. Solund 1982.
Furrevik, Anne Grethe: Gardskverna i Furrevik. I avisa Ytre Sogn. 17.07.1993. Høyanger.