Mjømna church is a so-called longchurch made of wood situated on the island of Mjømna, in the far western outskirts of the municipality of Gulen. The church has a seating capacity of 310, and was consecrated on 5 November, 1901, by bishop Johan Willoch Erichsen. Anders Korsvold from Gulen was both architect and builder. The church is a "sokn" church for the "sokn" of Mjømna in the parish of Gulen. The ¿sokn" was established by royal decree on 23 June, 1900. 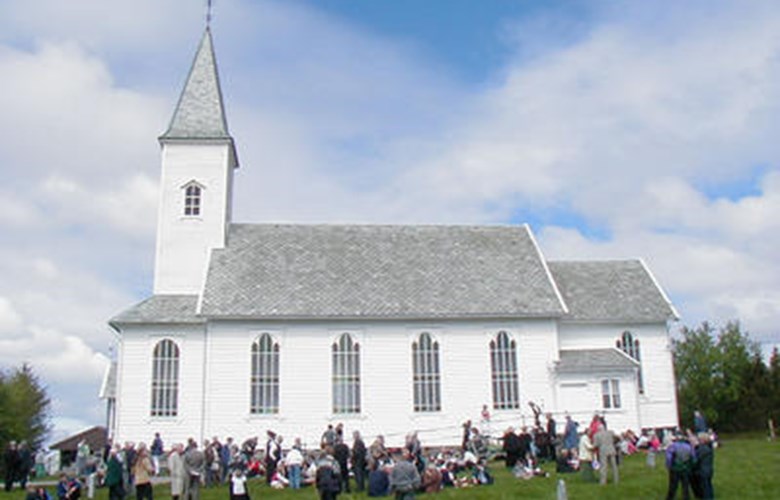 On a former outlying field on the island of Mjømna the islanders erected a plain but elegant church in 1901. The picture was taken at the church centenary / centennial in 2001.

A separate church for the islanders!

The temperature has probably never been so high in the ¿sokn" church at Eivindvik as when the islanders and the ¿fjord people" met to discuss the islanders¿ claim to build a church of their own on the island of Mjømna. To put it mildly, the opposition from the ¿rest of the world" was formidable. The islanders had to fight a short, but hard fight before their wish came true.
Formerly, the Eivindvik church also served as a "sokn" church for the islands. For those of the islanders who lived furthest away from the church, the distance was some 20 kilometres (some 12 miles). This meant that on Sundays they would have to set off early, and frequently brave dangerous waters and harsh weather conditions before they could arrive safely to the church. When Byrknes eventually got its own post office, and Mjømna became a port of call for the local steamship company, more and more people were of the opinion that the time was ripe for a church further out in the archipelago. In 1897, the mayor of Gulen accepted to have an open meeting in the Eivindvik church to discuss the matter. There has rarely been such a passionate exchange of words as when people from all corners of the parish argued for or against a church on the island of Mjømna.

The mayor strongly opposed the islanders, well aware of the fact that he had the full support of the local council behind him. «The fjord people» were very much against the idea as well. In their opinion, building a new church would be too expensive, and they paid enough taxes as it was. Besides, there were not enough people living on the islands to justify a new church. These arguments only made the people from the small island communities even more furious and frustrated, and before the meeting was over, they all rose from their pews and left the church in protest.
The Mjømna committee led by the teacher Hans Wergeland refused to give up. About 700-800 people would be using a new church if it was built, and, according to Wergeland and many others with him, taxes would not constitute any problem. A working committee was established, and the struggle was continued by means of legal advisors and court decisions. It did not take long before the demand by the islanders for a separate church was generally accepted, but it had indeed been a hard-fought process.

The master builder Anders Korsvold was a skilled and experienced man, and he agreed to design the church building. His design was accepted with only minor adjustments by the architect Schirmer, who at that time was a state building inspector. The chosen church site was suitably located in an outlying field down by the sea. The church is surrounded by barren crags on all sides. This, then, is the setting for the church that has called the islanders to service since 1901. Its location in this weather-beaten area is a reflection of the harsh living conditions of the congregation.

Mjømna church is a plain but elegant building. It has the usual vestries on either side, and at the eastern end there is a square turret base which also functions as a porch. The steeple and the spire are solidly built, but are not particularly high. When new, the church interior was painted in a light green colour, but with yellow areas on the doors and green areas on the rather wide gallery. The nave has a flat roof in the middle which slopes downwards to the side walls. There are three columns on either side and fine, pointed arch windows in the side walls. In the chancel there is a window on each side. The church is not richly decorated, but has tooth-carved edges, a characteristic feature also found in the later churches Korsvold built, for example the new Gaupne church. Originally there was only a carved, white wooden cross on the altar, but this was replaced by an altarpiece in 1927.
For its 50th anniversary in 1951, the church was restored and painted in its present colours. Only minor changes and repair work was carried out on the church building itself. In 1973, an annex was built containing toilet facilities and a funeral chapel.

The altarpiece is an oil painting on canvas by the local artist Vilhelm Bjørknes. The two three-branched candelabras on the altar are made of silver. For Holy Communion services there is a chalice, a paten, and a wine cruet, all in silver, but undated. The wooden font probably dates from 1901. The baptismal silver bowl dates from 1909 with an inscription. The holy water ewer in silver is undated. The pulpit, on the left-hand side of the altar, is from 1901.
In the church there is a votive ship model from 1992, shaped like a four-oared boat, made by Ola Eiksund. The organ from 1965 has six registers. It replaced an old harmonium which is now placed in the Byrknes chapel. The church bell dates from 1901 and is made by the Olsen and Nauen Bell Foundry.

The islanders of Gulen were eventually able to build their own church, is spite of vehement resistance from the 'fjord people'. Before the consecration of Mjømna church in 1901, the inhabitants in the island communities had to travel all the way to Eivindvik to get to church.
Owner: Gulen kyrkjekontor. - Date: 2001. - Photographer: Ukjend.
Gulen kyrkjekontor.
2001.
Ukjend.

In 2001, the centenary / centennial of the church was celebrated. The present colours of the interior were painted for the 50th anniversary in 1951. The pulpit is placed to the left of the altar, which is rather unusual.
Owner: Gulen kyrkjekontor. - Date: 2001. - Photographer: Ukjend.
Gulen kyrkjekontor.
2001.
Ukjend.

The altarpiece shows 'The Resurrection of Jesus', painted by Vilhelm Bjørknes. This is a copy of a painting by Adolph Tidemand (1814-76) entitled 'The Resurrection of Christ' (1871). Under the painting is an inscription: 'I live, and ye shall live also' (John 14;19). The original is placed in the Bragenes church in Drammen. When new, the church had originally a simple wooden cross as an altar decoration. The two three-branched altar candelabras in silver date from 1901.
Owner: Gulen kyrkjekontor. - Date: 2001. - Photographer: Ukjend.
Gulen kyrkjekontor.
2001.
Ukjend.

The pulpit is built in the symbolic octagonal form. The regular octagon (with the same length of the sides and the same angle between them) is a geometrical form between the square and the circle. The square symbolises the earth and the circle is a symbol of heaven. Consequently, the octagon is an intermediate form between heaven and earth, and is thus meant to symbolise spiritual rebirth, as in the ritual of baptism.
Owner: I <i>Mjømna kyrkje 100 år 1901-2001.</i> - Date: 2001. - Photographer: Aud Randal.
I <i>Mjømna kyrkje 100 år 1901-2001.</i>
2001.
Aud Randal.